Collectivism and trade unions - the future? 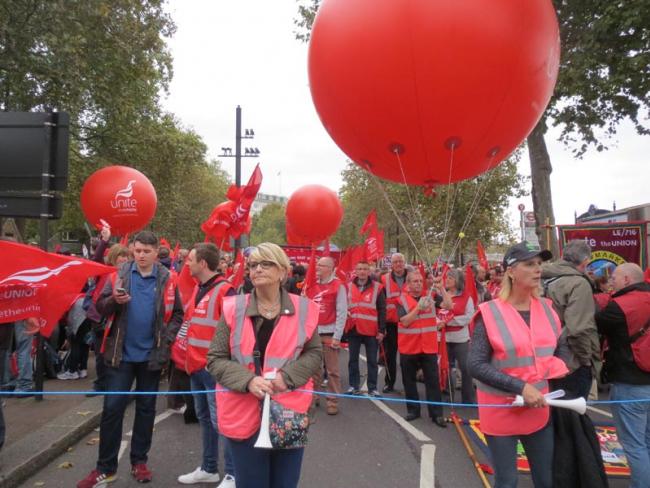 Unite section of the TUC march in London, 2012. Photo Workers.

Making that decision to be a union rep is never easy. Yet every day new reps come forward. Workers magazine talks to young person just starting the role as a union rep for Unite in a large, prestigious manufacturing company based in Britain but with facilities in more than 50 countries.

She already knew that the role could be a thankless task, but this new rep thought the chance to achieve good outcomes and victories for members was going to be rewarding and would easily outweigh any negatives. It would be a chance to reverse injustices and take pride in the collective. On a personal level it would be a form of “self esteem”. Putting in simple terms, she said, “It’s just a matter of principle.”

And not surprisingly, the discussion moved on to Brexit as well…

You’ve just completed the first stage of the reps course. What came across as the principal role of a rep?

Organising is still paramount, there were some shared experiences from other new reps. The Birmingham bin workers’ strike [against victimisation] was one experience as an example. We debated “What is acceptable and what is not from an employer?”

Is it much easier to be a rep in a large manufacturing workplace than in a small workplace?

There is still a lot of fear in small workplaces and reps can struggle to overcome this. Occasionally they only have the law on their side rather than power through numbers. There is obviously strength in numbers in a large workplace – but there is also an inherent risk of apathy.

In our large workplace we have reps and senior reps, and a reps convenor. The convenor then sits on the national negotiating committee, which represents all the workers from all the sites within the company. The structure works.

How do you ensure that reps are not out of touch with the workers they represent?

In our large workplace we always feed back to the members the details discussed in regular meetings with the employer and during negotiations. The members’ views are sought before the meetings during and after in an attempt to ensure their thoughts are aligned with those of the reps.

How do you discuss the two-class nature of Britain in interactions at work, especially during recent times with Brexit being a prominent issue?

I think the bankers seem to be in control. We need to stand up and control the money system. The bankers cloud the issue for ordinary workers. We argue among ourselves instead of directing our anger at them. The poor have paid for the crash of 2008 and for too long the working class have not fought their real enemy.”

Does the Labour Party really represent the class?

Many workers who used to vote for the Labour Party will no longer do so because they now understand that the Labour Party does not represent their needs any more. They do see the need for “self determination” and also see the national liberation struggle that is going on against the EU.

I would probably agree that the Labour Party and its leader represent a view from London and the South East and not from a northern perspective. Corbyn is London centric. There is a loss of support for the Labour Party particularly in places such as the former mining communities. They’ll be no more “rubber stamp” voting. We asked to leave the EU and it has still not happened and in fact the Labour Party is actively working against it despite the democratic vote.

How political should unions be?

In theory the unions should align with the Labour Party – but that party does not represent the working class. Unite should be all-out pro-Brexit.

Are the current unions really part of a collective of thought?

Union structures are not currently part of collective thought that includes the working class generally. What are they afraid of? Following Brexit their job is still secure as we will still have members to support!

Do you think there are other forms of collective thought going on in Britain at the moment, aside from the main political parties?

All people want is work and a fair wage. They want the safety net of the “cradle to grave” NHS principle. They want to be heard not herded. They are currently using whatever party speaks what they think.

Finally just to return to your role as a rep – will Brexit ignite your members to think more clearly about Britain’s future?

It’s simple. People voted for Brexit and the government should get on with it and not let Parliament and a crazy bunch of undemocratic MPs get in the way. And I’ve just told you what my members want.

Labour: a corpse in need of burial, not resuscitation
RMT union member "no platformed" for supporting Brexit
Stop shutting down debate
Protest at Scottish budget
TUC opposed in closet call for second referendum