Transport safety takes a back seat to profit 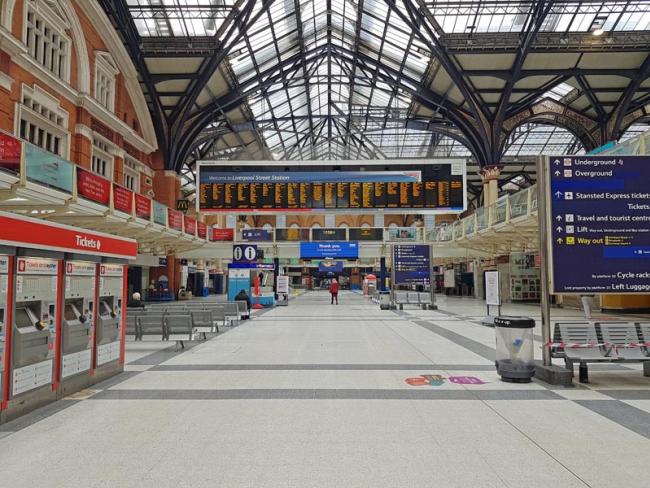 Keen to profit from the Covid-19 crisis, transport companies have been eagerly queuing up with their begging bowls, while ensuring that workers bear the brunt of the reductions in services…

As with so many other industries, Britain’s transport industry has been hit hard by the Covid-19 emergency. Many operators along with their employees face an uncertain future, and the airlines have effectively shut down.

The first casualty was airline Flybe, already in deep financial trouble. Covid-19 delivered the coup de grâce, and thousands were made redundant. The long-term viability of some airports is also in doubt.

The government’s offer of bailouts has really got the scum rising to the top. First in the queue with his begging bowl was Richard Branson, laying off Virgin airline staff from the safety of his private Caribbean island while sitting on millions made from his airline, rail and other interests.

The reaction to the crisis by Stena Line, the company that runs many of what used to be British Rail Sealink ferry routes, was to stop its staff receiving sick pay, followed quickly by the withdrawal of a paltry pay increase. It then announced that 600 staff would be put on the government’s “furlough” scheme, which allows an employer to lay off staff at no cost to them with the government paying those staff 80 per cent of their normal pay.

Stena refused union demands to top up furlough pay to 100 per cent. More worryingly, the company also announced that talks with unions would begin on making 150 staff redundant.

Not to be outdone, P&O Ferries announced that it would reduce rates of pay, change the terms and conditions of its seafarers, add no-strike clauses, and replace any existing British seafarers with foreign crews. P&O’s owner is the global corporation, DP World, which is based in the United Arab Emirates, and scheduled to pay a $332 million dividend to private shareholders on 29 April.

Britain’s rail industry has fared somewhat better. With the private franchise holders that run passenger services facing financial meltdown as passenger numbers plummeted to less than 5 per cent of normal levels, the government has effectively nationalised them. The franchise holders were given five days to choose between full government takeover and a management contract – they all went for the management contract.

So the government is now directly running two franchises, Northern (which was taken over only weeks before the crisis began) and LNER. It effectively runs the others via the management contracts.

So Covid-19 has killed off the system of rail franchises in place since 1996 when British Rail passenger service railways were privatised. No one expects it to return, not least because it was imploding under the weight of its inherent contradictions, with many franchises in deep financial trouble. It is thought that the long-awaited Williams Review into the future of the railways was going to recommend the ending of franchising anyway.

The government quickly brought the rail operators and Network Rail together with the unions to conclude an Emergency Measures Agreement. It contained commitments such as no redundancies, designed to ensure industrial peace, with all parties committed to keeping the railways running.

Perhaps inevitably, that industrial peace was short-lived. With the government’s message being “Stay At Home”, a skeleton timetable was adopted to allow key workers to get to work. Many rail staff have been told to work at home where possible, and many others have just been sent home.

It soon became clear that many train operators and rail contractors were taking a “business as usual” approach. The government’s advice, bolstered by the Health & Safety Executive and the Office for Rail and Road (the rail industry health and safety enforcement authority), is that social distancing – a minimum distance of 2 metres between individuals – must be maintained at all times. Yet a good many employers initially ignored it, and then paid lip service to it.

Rail staff were complaining to unions in droves that their employers were not taking steps to keep adequate social distancing. Many employers have clearly not undertaken appropriate risk assessments and put in place control measures required by health and safety laws.

Not only that, but many ticket office and revenue protection staff were being forced into work. Yet because in many cases there were more of them than passengers, they were twiddling their thumbs for most of the time.

The rail unions pointed out that many staff being forced to attend workplaces were not needed to run a safe and secure railway at this time, resulting in them being exposed unnecessarily, particularly when travelling to and from work. Indeed, a number of them have now died from Covid-19 and that number is likely to rise steeply.

Government ministers and senior rail managers have thanked the staff in videos from the safety of their living rooms for being on the front line of the fight against Covid-19, but many staff feel they are being treated as mere cannon fodder.

Pressure from the unions has resulted in a significant reduction in staffing. But the government and the employers remain accused by unions of putting commercial considerations before the health and safety of rail employees, by insisting that some ticket offices stay open and staff continue to check tickets. Yet if the railway were a free service, the additional losses would pale into insignificance against the massive costs already being incurred by taxpayers to keep services running.

Network Rail also came under pressure to reduce the number of major engineering works scheduled for the Easter period. Some jobs were indeed postponed, but the suspicion remains that some were going ahead with commercial considerations being put before health and safety. And it is unclear whether the necessary Personal Protective Equipment (PPE) will be made available to allow tasks to be performed which require workers to be less than 2 metres apart.

The government’s somewhat less than firm message to “Stay At Home” clearly hasn’t got through to many other employers who continue to force staff who are most certainly not key workers to turn up to work, and this has impacted on the transport system particularly in London.

The London Underground reduced its services, not only in the face of a drop off in passenger numbers, but also because at one point around a third of its workforce was either off sick or self-isolating. Large numbers of commuters continued to turn up, notably construction workers and cleaners, security guards, street cleaners and postal workers. The resultant and unhealthy crowding has been seen in photos plastered all over the media.

RMT General Secretary Mick Cash commented that “since this unprecedented crisis unfolded, London Transport workers have responded magnificently and are a credit to the City. Engineering and station staff, cleaners, train drivers, control staff, Docklands Light Railway, cable car, river boat, support staff and the rest of the huge team that move London's essential workers around the capital have risen to the occasion.

“Let’s be clear ‘all in it together’ means nothing without full support for the workforce who have kept London moving since this crisis began. All of the issues RMT has outlined are critical as the emergency continues and we will not rest whilst our members in the front line are still raising concerns with us. All of them have to have their safety, health and livelihoods properly protected and that is exactly what we will continue to fight for.”

London bus workers have become increasingly concerned about their health and safety after several of their colleagues died from Covid-19. Bus drivers all over the country have been expected to perform their duties providing a vital service to get NHS staff, shop workers and care staff to work, but most are doing so without the protection of screens or PPE.

Rail unions RMT and TSSA issued advice to rail and bus members that they should either refuse to start work or stop work on health and safety grounds if employers do not provide adequate protection from Covid-19.

While the passenger franchises and their employees are now enjoying the cosy warmth of government protection, the open access passenger rail operators Grand Central and Hull Trains have been forced by the crisis to suspend all operations and lay off their staff on the furlough scheme with no top up. Aslef and RMT have demanded government intervention and financial support, while TSSA has called on the government to nationalise the companies by taking them into LNER.

Many other rail operators look to follow suit and lay off staff on furlough leave. The rail unions are determined that all furloughed staff have assurances that their wages will be met in full with no detriment to their service or other employment conditions.

RMT described as “heartless” a decision by Select Service Partner (SSP) to lay off low-paid catering staff employed across the railway network in station outlets such as Ritazza and Upper Crust. They were left high and dry by their employer at a day’s notice, and told that SSP would not pay them while they waited for the furlough scheme to be up and running. The union complained bitterly about SSP’s unwillingness to engage with officials over their decision.

Mick Cash said, “In an outrageous show of contempt for their hard working employees, SSP has chosen to protect its own interests rather than support its low paid workers during this crisis. This is the textbook definition of a ‘bad boss’.

“SSP workers now have no idea how they will pay their bills and make ends meet until the Government’s scheme is operational.

“Staff employed at one of SSP’s subsidiaries, Rail Gourmet, now have security that 80 per cent of their income will be paid by their employer during this time. This must be extended to all of SSP’s rail caterers as a matter of urgency.”

Cash called on the owners and managers of rail stations (Network Rail and passenger franchise holders) to demand that SSP look after its workers. “That SSP has so far refused to protect its workers during this period of uncertainty proves once and for all that their time on the rail industry is up and their workers should be brought in-house, to ensure they receive the basic protections that they deserve.”

As this Covid-19 emergency unfolds, there are bound to be further battles ahead to protect transport workers as the end of lockdown draws nearer, both from the virus, and from the callous employers that will seek to make them pay for the crisis.

In transport, as in many areas of the economy where people simply cannot work from home, workers are having to grapple with issues such as how do we continue to work while ensuring minimum reasonable risk to ourselves and other workers?

Trade unions are dealing with these problems, and the key to a successful approach is to take responsibility for a workplace. Some unions will have to up their game if they are to adequately respond to the challenges.