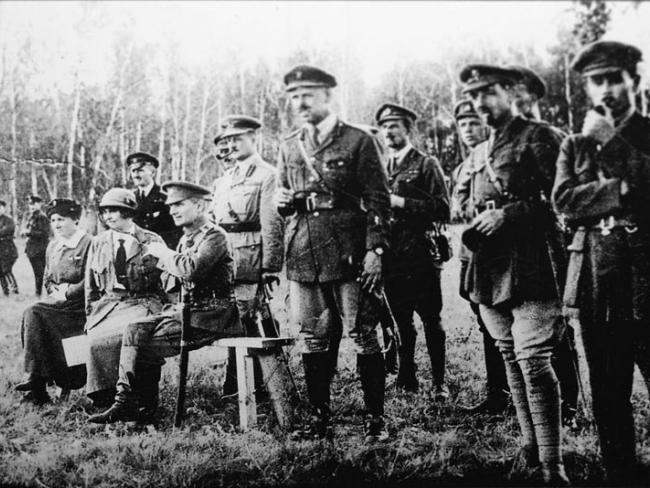 After the October Revolution, soldiers from 15 countries invaded Russia in an attempt to destroy the Soviet Union, but it emerged victorious…

The October Revolution of 1917 triumphed decisively in Russia, in rapid fashion and relatively painlessly. That it did so was largely due to soviet power structures which welded together groups of industrial workers in huge factories.

But anti-popular forces were soon conspiring to overturn the new era. Ultimately imperialist meddling in the Russian Revolution saw soldiers from 15 countries invade to combat the revolution.

The First World War was still running during 1917 to 1918. The new government issued a Decree on Peace the day after the soviets took power. That decree was vital in gaining support within Russia for the October Revolution and for the establishment of soviet power.

But throughout 1917-1918 the Central Powers of Germany and Austria-Hungary were still fighting on Russian soil on the eastern front.

On 2 December 1917 (15 December New Style) an armistice was signed between Russia and the Central Powers, though it took more months to finalise a peace treaty at the town of Brest-Litovsk. In the negotiations the new revolutionary government recklessly adopted a utopian policy of “Neither War nor Peace” in response to the harsh terms that the Central Powers wanted to impose. These demanded Russia give up Poland, Lithuania and western Latvia.

On 28 January 1918 (10 February New Style) at Brest-Litovsk, Trotsky unilaterally declared that Socialist Russia was ending the war. The German generals then resumed the war rolling eastwards over the empty trenches. Lenin intervened and the government sent a new delegation to Brest-Litovsk to accept the Central Powers’ terms and sign a peace treaty.

There was a vast loss of territory, though none of it was in the core area, known as Great Russia. Accepting its position of weakness, the revolution now concentrated on securing what it held. The capital was transferred from Petrograd to Moscow, where it was less exposed to attack.

By spring 1918 the revolution, finding itself too reliant on the unstinting loyalty of the Latvian Riflemen, decided to build a Red Army, now that there were more rebellions and the old army had largely dissolved. Lenin wrote, “No revolution is worth anything unless it can defend itself.”

The revolutionary government created a Red Army with centralised control and Russia was divided into six military districts. In the spring of 1918 the Red Army had 300,000 soldiers. By the end of 1918 its strength had grown to 700,000; in early 1920 it was 3 million; by the end of 1920 roughly 5 million were in the army.

The scale of the enemy incursions meant the days of a volunteer army and elected commanders were put to one side in favour of mass conscription and a system of commanding officers and military commissars working in tandem. Supplying this big army was not a problem as the revolution controlled central Russia, where the arsenals and war material were stored.

The central zone of Russia stayed in Soviet control throughout the Civil War that followed, though counter-revolutionaries (known as Whites) bounced back in the periphery where revolutionary forces were politically weaker and where outside forces chose to intrude.

Red Army commanders did rise from the ranks of workers and peasants, though many former tsarist generals and officers also joined. In 1920 half of all Communist Party members were in the army.

‘When the war ended,  people questioned why British soldiers were still fighting and dying in Russia.…’

During the world war, Allied Intervention inside Russia had been justified by the British establishment on the need to beat the Central Powers. But Allied victory over Germany in November 1918 did not lead to withdrawal. Instead it increased hostility to soviet power.

When the war ended, significant sections of the British people questioned why British soldiers were still fighting and dying in Russia. A “Hands Off Russia” campaign started in January 1919. Famously, London dockers stopped loading a ship in May 1920 when they discovered it was carrying munitions bound for Poland, widely perceived to be Britain’s indirect means of supporting counterrevolution in Russia.

The revolution successfully defended itself and won through for many reasons. Primarily this was because working people were not prepared to give way to the White and imperialist armies. Despite enormous privations they fought on to triumph.

The fact that the revolution kept control of the Russian heartland throughout the civil war had a decisive impact. This area had the largest chunk of population of the old empire and was mostly Great Russian in nationality. It contained most of the war industry and the leading establishments and stores of the old army and navy.

Military reorganisation in 1918 and the creation of new mass armies took advantage of large reserves of manpower, far greater than were available to the invading imperialist armies. These Red armies became a powerful factor by 1919, and an overriding one by 1920.

The revolutionary state controlled a vast territory and could give up ground without being seriously threatened. The White armies were seen as wanting the restoration of the old order and upholding the privileges of the wealthy.

Even after the breakaways forced by the Brest-Litovsk Treaty, at the end of the civil war more than four-fifths of the former subjects of the Tsarist empire were citizens of the Soviet federation – a notable achievement. The Allies’ military support for the Whites left a legacy of suspicion that lingered for decades in the Soviet Union.

1917 - 1920: the Russian Civil War
100 Years after the Bolshevik Revolution
Soviet planning versus capitalist chaos
1: The five-year plan
2: The Stalin constitution