The American origins of the EU 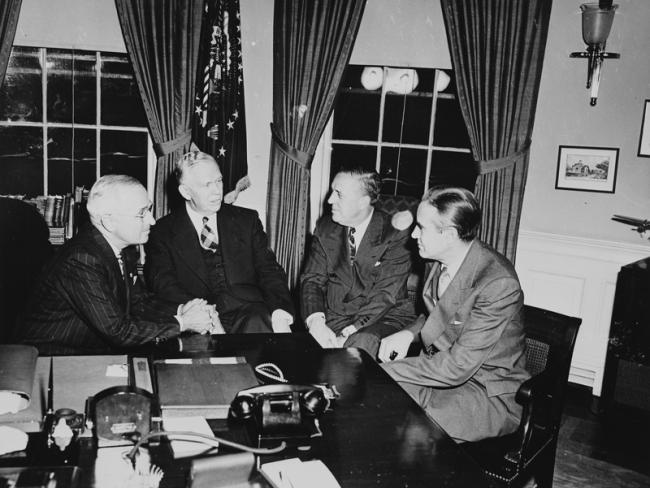 Where did the EU begin? In the Oval Office of the White House. See foot of article for further detail.

The supra-European approach took its first steps following the Second World War, at the eager prompting of the United States. In March 1947 a resolution passed through both houses of the US legislature declaring, “Congress favours the creation of a United States of Europe”.

This US support for pan-European initiatives was prompted by its fear during the economic dislocation of 1946-47 of the significant membership growth in the communist parties of Italy and France. It was symptomatic of the rabid “resist the spread of communism” contagion that was the hallmark of postwar America.

In June 1947, the US State Department proposed a European Recovery Programme, known as the Marshall Plan. Sixteen European nations formed the Committee for European Economic Co-operation, making a case for $19.1 billion aid from the USA. They received $13 billion shipments of food, staple goods, fuel, machinery and vehicles produced in the United States and, later, investment in industrial capacity in Europe.

Marshall Plan funding, which ended in 1951, was not an act of altruism. Europe was an enormous market for American commercial interests. Aid came with two conditions. Firstly, pressure was placed on European governments to adopt trading rules that eased the path for American exports. Secondly, recipient countries had to promote a federal Europe.

The Organisation of European Economic Co-operation (OEEC) was created to administer the distribution of Marshall Plan funding. Jean Monnet, a French politician largely recognised as the founder of the EU, pushed for the OEEC to have an executive council with supranational rather than intergovernmental powers. And the newly formed CIA set up the American Committee on United Europe as a conduit to provide covert funding to promote federalism and integration.

“Our Community is not a coal and steel producers association. It is the beginning of Europe.”

Monnet’s scheme was to build a United States of Europe, beginning with the integration of the coal and steel industries and a supranational authority to run them. The plan proposed that Franco-German production of coal and steel be placed under a common High Authority within the framework of an organisation that was open to the participation of other European countries.

This pooling of coal and steel production was intended to set up the common foundations for enlarged economic development and pave the way for the political eclipse of nation states.

In effect today’s European Union began in 1950 with the creation of the European Coal and Steel Community (ECSC), which placed all French and German production of coal and steel under one central authority. The British government was not even told of these plans. Italy and the three Benelux countries (Belgium, the Netherlands and Luxembourg) joined soon after.

Jean Monnet said, “Over and above coal and steel, it is laying the foundations of a European federation.” Some governments of the six countries were worried about the unlimited powers of the High Authority. An intergovernmental Council of Ministers was created with qualified majority voting. But although this council could take part in decision-making, it could not instruct the High Authority, which was to remain supreme. Britain, which would not at that time submit to a supranational authority, remained outside.

The Treaty of Paris in April 1951 created the ECSC, requiring the governmental powers of the six states to be abandoned to a stateless and uncontrolled autocracy. Monnet was appointed as the High Authority’s first president. “Our Community is not a coal and steel producers association. It is the beginning of Europe,” he said.

It is speciously argued that after the war there was a need to form some pan-European entity to subdue the rivalries of the nation states in Europe and particularly France and Germany, binding them within strong institutions. In fact in the postwar world, these old problems were not apparent. European integration was encouraged, particularly by the US, to oppose the socialism in the Soviet Union and in Eastern Europe. And a European Community offered Germany “respectability” and a greater role after the twelve years of Nazi rule.

After the French National Assembly defeated a move to establish a treaty for a European Defence Community in 1954, the six founder states proceeded again on the path of further economic integration.

For a few years all public statements about European government disappeared and the strategy pursued was of building Europe through the progressive integration of other economic sectors. The first targets were the nuclear industry, all forms of energy, and transport. Building Europe was presented as merely a matter of trade and jobs, though political integration proceeded under the guise of economic integration.

The European Economic Community (EEC) was set up by the Treaty of Rome in 1957 by France, Germany, Italy, Belgium, the Netherlands and Luxembourg. The treaty opened the way to an integrated economy, as the common market was extended to the whole of the mutual trade in goods of the founding countries.

Though the early ambitions appeared economic, the preamble to the founding treaty agreed by the six heads of state declared that they were “determined to lay the foundations of an ever closer union among the peoples of Europe”.

From its very inception, joining integrationist Europe always meant much more than accepting a certain set of conditions in the here and now. It was also participation in a process that would lead onwards to a final destination. This is still the case today.

• A full history of the origin and development of the EU is now available at www.cpbml.org.uk.

The Making of a Nation - new leaflet from the CPBML
Labour: a corpse in need of burial, not resuscitation
Welsh seafarers call for jobs, training and a future
The weakness at the heart of the EU
A 'more perfect' union?