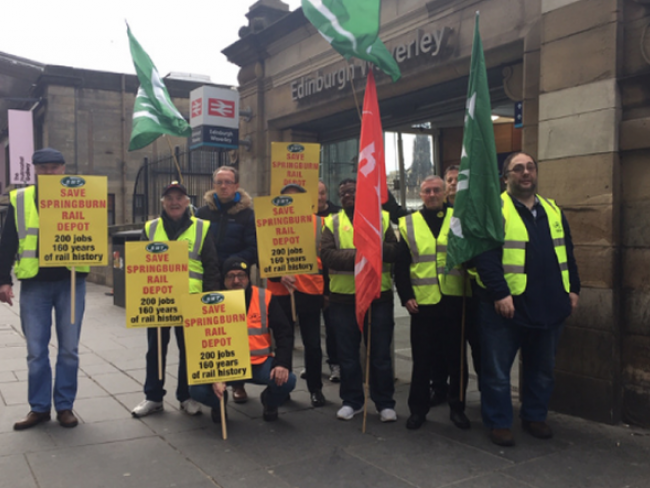 19 Feburary: Campaigners assembling at Edinburgh Waverley Station before marching to the Scottish Parliament to protest against the proposer of the Springburn depot.

Representatives from the Unite and RMT unions fighting the threatened closure of the historic “Caley Railway Yard” in the North Glasgow district of Springburn were left dismayed when they turned up for a meeting with Scottish transport secretary Michael Matheson at the end of January – only to find he had skipped off and in his place sent delegations from Scottish Enterprise and Transport Scotland.

The yard, owned by Gemini Rail Services, carries out maintenance, repair and upgrades on ScotRail trains and employs over 200 skilled workers. The unions had gone to Edinburgh to meet Matheson after Gemini refused requests to extend the statutory consultation period for redundancy.

This is yet another piece of evidence that the SNP does not represent the interests of working-class people from areas like Springburn – once home to a proud industrial landscape that employed many people from the local area. Its workforce once produced more locomotives than anywhere else in Europe.

Times have changed. At 3.7 per cent, Springburn has one of the highest proportions of residents receiving job-seekers allowance in the country. A 2012 report by the Scottish government ranked Springburn’s Kepochhill neighbourhood as the third most deprived in all of Scotland, and the loss of 200 skilled jobs in the area would only make things worse.

Unions are calling for the yard to be nationalised, but until a final break with the EU – and certainly during Theresa May’s proposed transition period – that would require permission from the EU, as would anything amounting to perceived “state aid”.

And yet, the Scotland’s SNP cabal is committed both to leaving the United Kingdom and to re-joining the EU. That would bring it back under the control of the EU’s Single European Railway Directive, which was designed to facilitate the growth of private rail companies.

Nationalisation would be a mere reverie in an “independent” Scotland that was subject to EU law, and would not be able to guarantee these jobs in the long term.