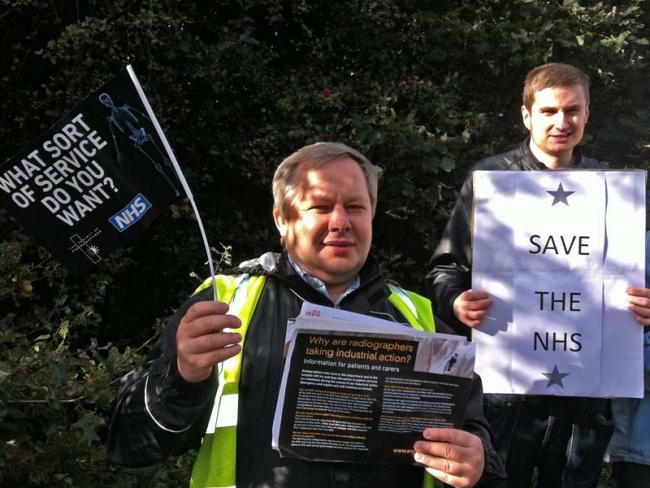 Failed leadership, in-fighting and lack of vision – London’s NHS colossus is in a crisis that only dialogue with unions can solve…

THE LARGEST NHS trust in Britain, Barts Health in London, with over 17,000 health staff at six hospitals, including the Royal London, is blundering towards the precipice of bankruptcy. Barts Health as a trust was flawed from the inception of the Barts PFI deal, which dates back to the 1980s though it was only delivered under the last Labour government. It created a state-of-the-art hospital on a site dating back nearly 800 years, but the trust was tied into an unsupportable and impossible PFI debt.

This became even more obvious when the coalition government took office in 2010. Health secretary Andrew Lansley tried to exclude his office from any responsibility for failing NHS trusts. His attempt to introduce such a get-out clause in his Health and Social Care Bill and subsequent Act was defeated, but anyone working at the trust or in the health trade unions knew that sooner or later the Barts situation would implode.

Adding Newham Healthcare Trust (itself another recent Labour PFI creation), and Whipps Cross in Leytonstone (which had been promised but not received a new PFI extension, and which still has a mothballed power station intended for the replacement hospital) to the Barts mix was simply an attempt to make Barts financially viable.

Under the previous government, important restructurings were taking place across health care provision in London which created centres of excellence for specialties, with smaller less skilled hospitals directing patients to them. This has led to a significant improvement for patients. Hence the roles of Newham and Whipps Cross were to change and Barts specialisms were to expand. The change of government in 2010 stopped this process.

Bart’s management strategy became one of trying to meet the PFI repayments of £100 million a year, without support or bail out from government, by making the staff pay for reducing the debt.

A “turn around” team, driven by accountancy and banking pedigree, was brought in to achieve the savings. Management abused the terms of the Agenda for Change agreement (which concerned job evaluations and bandings of posts), moving to reduce all staff bandings (wages and skills) by one or two levels. Hundreds of staff saw their wages savagely cut.

The challenge to this is now gaining momentum. Unison, having demonstrated the flaws in the process and having cajoled other reluctant unions into supporting a fight against these downbandings, has also gained support from the NHS Employers’ Confederation job evaluation experts in saying that the process pursued at Barts was wrong and now needs reversing.

So the attempt to make the workforce pay for the PFI disaster looked to be heading for the rocks and the central management strategy was starting to unravel. Then the November 2014 visit by the Care Quality Commission resulted in a blistering report (published in March 2015) which condemned the trust management for failing to address management failures, inadequate resources and persisting with poor outsourcing practices.

Whipps Cross has been placed in special measures to try to save the hospital. Senior resignations from the board followed immediately (more should follow!).

The view held by the health trade unions that there is a long history of poor management and leadership by the employer across the legacy hospitals, which became institutionalised in the newly merged trust, has been utterly vindicated. The trust is now effectively rudderless.

But this Barts “style” has had a significant impact on union branches and membership over many years. Dysfunctional management, dysfunctional trade unions, demoralised staff, significant staff turnover rates, staff happy enough to have Barts on their CV but not willing to stay – all have contributed to the crisis.

An extensive staff survey – still to receive proper attention – highlighted bullying and harassment. The failure of trade union members and staff to address this “style” collectively speaks volumes. Have we learnt nothing from the Mid Staffs nightmare – where people knew what the problems were but stood back twiddling their thumbs, or looked the other way, or pursued their own interests?

The other diversion Barts and its legacy trusts have had to cope with over many years has been the attempt to infiltrate and take over the union branches, primarily Unison and Unite, by the ultra-left. This has resulted in sectarianism, in-fighting, division, exclusion, cliques trying to control the trade union branches. The staff at the hospitals will need to take hold of their organisations to rectify this destructive activity.

Barts cannot remain as several trusts bolted together. It has to become one to survive. It must become a centre of excellence, with constituent hospitals such as Whipps Cross and Newham serving that purpose.

This will inevitably involve a centralising strategy of concentrating provision for certain specialisms (a process which has already proved so successful in improving outcomes for stroke patients in London). It may be that as a result hospitals such as Whipps Cross and Newham will need to reduce some provisions further to enable this strategy to proceed – and staff, local people and politicians will need to accept the logic of this.

What is needed now is for management in Barts Health to start a genuine exchange with the trade unions. Both must be clear that the PFI debt is for the government to resolve, not for the staff to pay for (which resulted in the disaster described in the Care Quality Commission’s report). Only then can Barts Trust begin the road to recovery.