Into battle for the BBC 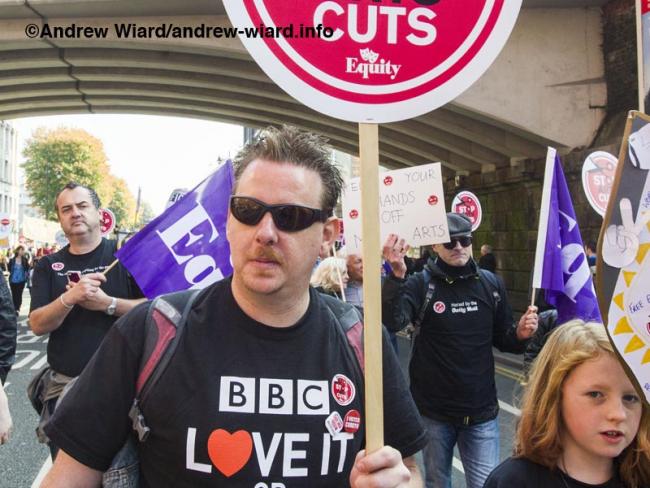 As members of the National Union of Journalists gathered in Southport for their biennial conference on 14 April, one of the key topics of debate was already clear: the future of the BBC.

Ten days earlier, the four media unions organising at the BBC had issued a statement calling on BBC Director General Tony Hall to ditch the secret agreement with the government last year.

In what the unions call a “shoddy deal” – made without any consultation with anyone, parliament least of all – the BBC last year agreed to shoulder the £650 million cost of free TV licences for the over-75s. Effectively, the BBC announced itself as an agent of the Department for Work and Pensions, which had previously funded the free licences.

In return the BBC has been graciously allowed to raise the licence fee by the rate of inflation, and lower its commitment to help fund rural broadband. But the free licence commitment equates to 20 per cent of the BBC’s budget. “Entire services will have to be cut, programmes dumped, free speech undermined and thousands of jobs lost,” said broadcasting union BECTU.

These attacks will come on top of a decade of cuts, and against the looming background of the 10-yearly renewal of the BBC’s Royal Charter, due in 2017. Meanwhile a White Paper on funding and the future of the BBC is due out during May 2016, or more likely after the EU referendum. Issues were flagged up in a 2015 “root and branch” Green Paper review to which there was an unprecedented public response (192,000 submissions).

Throughout the debate about what sort of BBC we want, entertainment unions the Writers’ Guild, the NUJ, BECTU and others have run a campaign called “Love it or Lose it”. On 5 April, under the banner “Keep the BBC independent, ditch the deal!” they demonstrated outside the BAFTA awards ceremony in Piccadilly, culminating in a “thunderclap” of simultaneous tweeting and posting on social media (#future of TV #back the BBC). The public loves the BBC, but without a fight it will not survive as we know it.

At stake is the destruction of no less than the cultural equivalent of the NHS. It even saves lives: during the floods in Cumbria local radio gave life-saving information and advice.

Outgoing chair of the Arts Council Sir Peter Bazalgette described it as Britain’s greatest asset after the English language and Shakespeare. For many viewers and listeners overseas the BBC is simply Britain. It is the country’s biggest commissioner of new music and young talent, and Europe’s biggest provider of media and creative skills training (technical staff). It is the greatest investor in news production in the world, reaching 210 million people. Its investigative standards are second to none.

Whether in times of crisis, or on a daily working basis, it is a national point of reference, capable of uniting the country and interpreting world affairs.

Expect a wide-ranging review, with wide-ranging attacks. Select Committee recommendations asked Culture Secretary John Whittingdale to look at such matters as the purpose and content of the BBC, its regulation and accountability, size, independence from government and commercial interests, financing and standards.

The licence fee, subscription top-ups, the security of future funding, expenditure, expansion or reduction of services, the pay and perks of top executives, the failure of a digital media initiative (cost: £98.4 million), and the apparent cover up by Newsnight of abuses committed by Jimmy Savile and others – flaws highlighted by the resignation of Jeremy Paxman – have all been reviewed.

Argument has raged around the fine detail of governance and structure of the Corporation, virtually to the exclusion of its mission to “inform, educate, entertain”. Controversial proposals include a unitary board largely appointed by the government to replace the BBC Trust. This would be regulated by media regulator Ofcom, and have powers to set the editorial direction of the whole of the BBC, which the Trust was not empowered to do.

The fear is that government placemen would edge the BBC closer to being a state broadcaster rather than a national democratic voice. There is likely to be a duty placed on the board to consult with the public as a matter of course. But if the BBC’s recent track record is anything to go by, don’t hold your breath.

Public debate has also pitted popular culture, such as The Great British Bake Off and Top Gear, against serious programme making. The 2016 BBC Proms will unashamedly feature Strictly Come Dancing in an attempt to capture a new audience.

‘The licence fee equips the public with a sense of proprietorship and scrutiny.’

But what really matters to most people is that their subscription should support a “universal public service” (that is, for everybody) and retain an independent national voice, as it has for over 90 years. Ordinary licence fee payers could hardly care less what goes on in the higher echelons of the BBC. But perhaps they should: cuts of £80 million are planned by 2021.

A licence fee may not be the ideal way to fund the BBC – proposals for a universal levy on households have been mooted – but calls for wholesale government funding are simply fanciful. On the contrary, the government wants to introduce competition and privatise the BBC, but so long as a licence fee equips the public with a sense of proprietorship and scrutiny, they can't get away with it.

Whittingdale has opposed the licence fee and wants to decriminalise non-payment. Meanwhile, the Treasury has refused an increase in direct government subsidy.

The picture is dire. Thirty per cent of management jobs, including back office and support roles, are to be slashed in an attempt to save core costs. Radio is said to be facing a “death sentence” as plans to hand it over to “the market” go ahead. And all the while the EU claims the right to monitor the activities of national broadcasters, waiting for any opportunity to increase its powers to encourage privatisation.

Pensions and legitimate expenses such as travel for reporters are under attack. Low wages, especially in the World Service, mean it is difficult to attract and retain staff. A new management regime at BBC News is busy dismantling longstanding agreements and policies – staff voted to strike, and the BBC stepped back.

An unworkable redeployment policy within BBC Nations and Regions has left some members of the NUJ facing possible redundancy for three years and necessitated a trawl for voluntary redundancies. Restructuring at BBC News Gathering in 2015 led to a 24-hour strike in Birmingham in protest at the loss of editor roles, with opposition also in Bristol and the south west.

White City in London has been sold off, and the 93-year old Meteorological Office contract put out to tender. BBC3 TV can now be found online only. News is also moving online.

In a digital age, there is fierce competition from cheaper, faster, bigger American rivals. The BBC’s £3.7 billion annual budget is dwarfed by the likes of Amazon, Google, Netflix. Many prefer to listen or watch on catch-up, a loophole which deprives the BBC of £150 million a year, as a licence is currently required for live programming only.

From 2016, however, iPlayer TV will begin to feature live streaming with stars such as Paxman, Cumberbatch, Judi Dench, to draw in new licence payers. Even those watching on smartphones and tablets will need a licence.

Journalism and the arts have to be paid for like everything else.

Charter renewal is still several months away. At its conference in Southport, the NUJ committed itself to the “strongest possible” campaign during the Charter Renewal. We must make it an opportunity to reassert our working class values of freedom from shareholder and government pressure, advertiser influence and the chase for ratings.