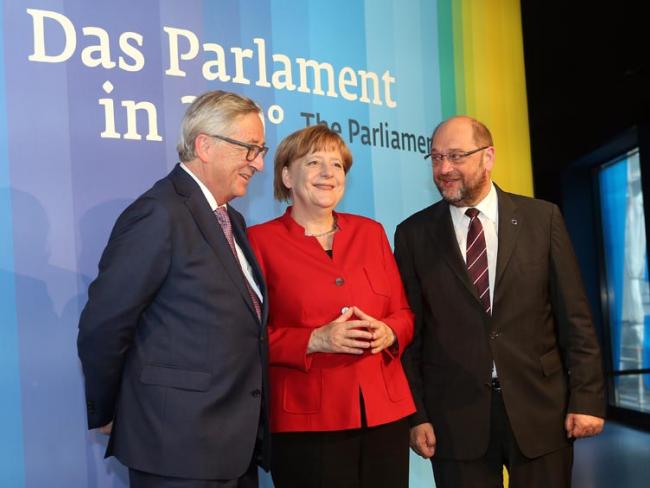 This candid and well-informed study of Germany’s leading role in the EU is written by Sir Paul Lever, British Ambassador to Germany from 1997 to 2003. It shows how Germany has dominated other member states.

Lever accurately sums up our position in the EU before our decision to leave as “...completely without influence in the European Parliament and with no ability to persuade its fellow Council members to resist the Parliament’s grab for power.”

Jean-Claude Juncker was appointed Commission president in 2014 thanks to Chancellor Merkel’s support. Lever explains Juncker was someone “...for whom no one in Britain had voted, who was opposed by all the main British political parties and who did not receive the vote of a single British member of the European Parliament.”

All EU member governments now adopt the German policy to raise taxes and cut public spending. As this is included in the Treaty of Fiscal Union, the consequence is that “...this view will govern the whole of the eurozone. No deviation from it will be allowed.”

Lever writes, “The countries who have, at German insistence, adopted deflationary policies and budgetary austerity in order to stay within the euro will want to know what their reward will be for their sacrifice…They will, on present form, receive no answers. No political party in Germany has any plans to improve the economic situation of any of Germany’s EU partners.”

Germany’s economic model depends on outperforming its European partners. This is guaranteed by the way the EU works. Lever says, “Germany is by far the biggest beneficiary of the euro, just as it is of the EU’s internal market. This is no coincidence. It has been German policy to ensure that the structures and rules of the EU and of the euro were cast in a German image. They have succeeded in doing so.”

An example is the directive on services in the internal market. This allows companies from countries with lower social security entitlements and contribution rates to compete with those where benefits and charges were higher. “No one in the debates in the European Council or the European parliament had the courage to point out that this is precisely the logic of a single market.”

This imbalance means that many of the other member states will be uncompetitive within a single currency area. They will inevitably struggle to generate the growth to sustain the fiscal discipline to which they are committed at Germany’s insistence.

The result? “The social cost will continue to be huge. Countries whose economies are not as competitive as Germany’s will be continually forced to deflate and to cut back on their borrowing and their public expenditure.”

One example, “At an acrimonious meeting of eurozone heads of government on 11-12 July 2015 – described by some participants as the most brutal which the EU had ever experienced – the Greek government was forced to choose either to leave the euro or to accept austerity measures much more stringent than those which its citizens had rejected in a referendum only a week previously.”

The EU’s future is “more Europe”, more integration. Lever points out that both the right-of-centre and socialist parties in Germany favour “...more integration within the EU, with the eventual goal of creating a federal European state.”

In 2012 Merkel forecast that the European Commission was bound to become the government of the EU, the European Parliament its source of democratic accountability and the Council of Member States its upper chamber. When the German government was formed in 2013 the coalition agreement said, “We strive for a closer network of European forces which can evolve into a parliamentary-controlled European army.”