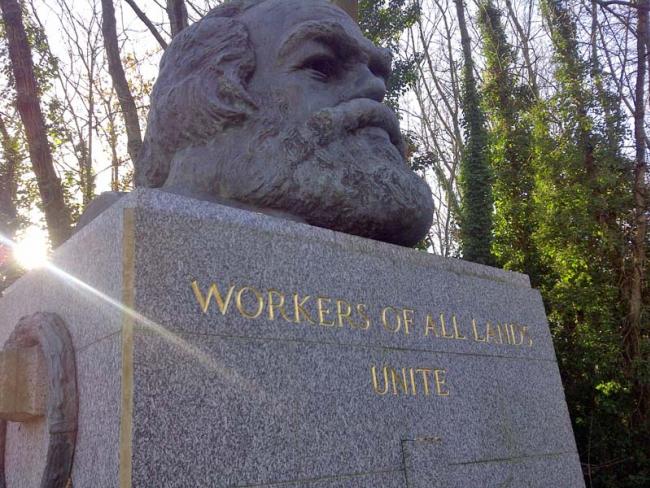 The bust of Karl Marx on his grave in Highgate Cemetery, London. The inscription “Workers of all lands unite” is taken from the conclusion of the Communist Manifesto. Photo Workers.

Something interesting to say the least has occurred with the Bookseller list of current bestsellers. The Communist Manifesto by Karl Marx and Frederick Engels is a new entry into the top ten list of general paperbacks sold in the country compiled by the book trade magazine.

The current surge of interest follows the decision by Penguin Books to include the Manifesto in its “Little Black Classic” range, 80 titles re-published at the end of February to commemorate the 80th anniversary of the first Penguin. Each is on sale at a price of 80p, and the Manifesto leads the collection in sales.

The new paperback has the added advantage of not being prefaced with an introduction by some academic telling readers what it means. So new generations taking an interest in understanding class struggle and capitalism can reach their own conclusions.

First published as a 23-page pamphlet in 1848,‎ a full 167 years later it is still a best-seller. The fact that these new readers are buying the book rather than digital or electronic downloads is also reassuring: this is no read-once-delete publication.