The big opportunity for homes fit for workers 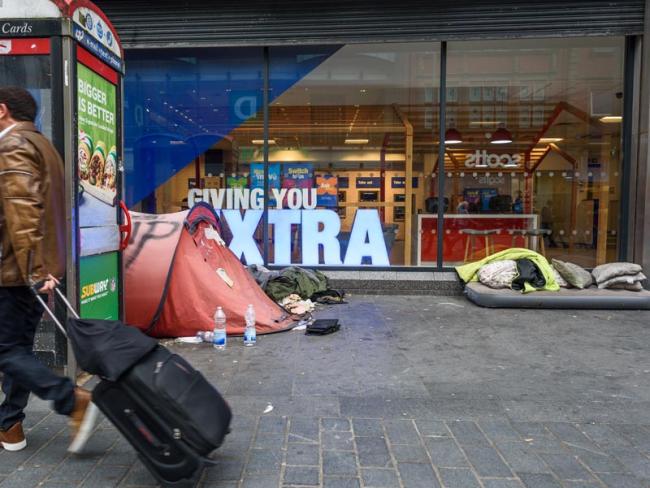 The need for truly affordable housing is universally acknowledged, yet it is not delivered. Brexit, implemented with control over the economy and migration, will allow Britain to plan properly to house its people…

They call it a housing crisis, yet policymakers fail to act and have persistently ignored the mismatch between the wage packets of ordinary people (and their supposedly wealthy parents) and the actual cost of a home, especially but not only in London.

For some, crisis is already catastrophe. When a rough sleeper was found dead on the threshold of Parliament shortly before last Christmas, there was much breast-beating in the Commons. Yet he was only one of up to 217 people found dossing on Westminster’s streets on any single night.

Austerity kills. The deepest cuts in local authority spending have resulted in the highest deaths of people “of no fixed abode”, according to research from the Labour Party. The worst areas are Birmingham, Manchester, Leeds, Blackburn, Liverpool, and the four London boroughs of Camden, Westminster, Lambeth and Tower Hamlets. The problem is nationwide.

In 2018 then housing secretary James Brokenshire proudly announced a derisory £30 million to tackle rough sleeping in England and Wales. Birmingham, for example, with the highest number of homeless deaths, received £405,000 compared with a cut of over £350 million to the city's budget.

Camden has had the second worst level of cuts – and up to 127 homeless people can be found on its streets in a single night (2017 figures). But for cynicism the Royal Borough of Windsor and Maidenhead takes some beating – it tried to fine rough sleepers £100, calling it “homelessness support”.

If people are not actually on the pavement, sofa-surfing, sleeping in cars or in cockroach-infested B&Bs are also on the rise. Council properties are auctioned off to the highest bidder, bypassing local people on the waiting list. Young people forced into unaffordable private rentals face eviction for non-payment.

By 2025, an estimated 40 per cent of Londoners will be renting, increasingly from private landlords. Until recently a landlord could lawfully evict without the tenant having breached their agreement. Landlords also tend to be child-averse. Raising a family, that most basic rite of passage, is prohibited by the diktats of the market.

‘Council properties are auctioned off to the highest bidder…’

Wage increases are wiped out as rents rise in line with earnings, eating up a third of the average worker’s monthly pay (over 40 per cent in London). Taxpayer-funded housing benefit, working tax credit, and other forms of compensation for low pay or lack of pension, have become a drain on the economy. One set of workers in effect subsidises the low wages of another set. Only the landlord benefits.

All London mayors to date and every single government in this century, whether Labour, Conservative or Coalition, have been starry-eyed about the oligarchs, money-launderers, and big-time tax evaders buying up property off-plan, then leaving it empty. Why then was there surprise from the Establishment that so many people living in housing estates voted against the them in the EU referendum?

The new prime minister, and the even newer communities minister Robert Jendrick, must heed the statistics and invest in an immediate programme of council housing. Let’s not hold our breath, though. Housing ministers come and go, and Johnson’s staff are as wedded as Thatcher ever was to home ownership to the exclusion of social housing.

For all the Johnson emergency largesse, no funding has at the time of writing been set aside for housing in the public sector. And no other helpful housing-related announcements have been made, either.

Welcome initiatives would include: that the sell-off of council and housing association properties is to be stopped; that compulsory purchase powers will be used to take empty property into public ownership; that a long-term national strategy for social housing is being developed; and that the false left/right arguments pitting home ownership against renting, private v social housing will be ended.

According to a report (June 2019) by the Greater London Authority, £4.9 billion is needed each year to give Londoners genuinely affordable housing – seven times the £700 million City Hall receives from the annual housing grant. And that is estimated to be lower than the level of government support before the 2008 financial crash.

Clawing back £39 billion from the EU budget through a no-deal Brexit would help with money, but in itself money won’t stop speculation in social housing. With their veneer of philanthropy, housing associations have been a growing market, today worth £60 billion in the UK. At their inception in the 1980s they were meant simply to supplement local authority housebuilding. They now compete like any developer in a global market place and are being eyed up by other global investors.

Only 50 per cent of the houses they build are designated, deceptively, as affordable. With a further twist of the English language, their “affordable rents” are at up to 80 per cent of local market value, forcing genuinely needy tenants out of the “prime” areas (to use estate agents’ jargon).

Even by the housing associations’ own criteria these policies no longer seem to be working. Renters are voting with their feet and looking elsewhere. Landlords report a drop in Affordable Rent lettings in the period 2017-2019 and their profits have been dropping – most sharply in Scotland.

Workers can take heart from landlords’ discomfiture. London mayor Sadiq Khan has failed to reach targets for new building, so he has called on the government for extra powers to cap private rents. Tenants have been demanding this for years.

Developers, buy-to-let landlords and overseas investors have reacted with threats of taking their money elsewhere. With Brexit Britain’s new-found confidence, they may not be as indispensable as they think.

In Berlin, where locals are complaining at being priced out by migrant labour from across Europe and beyond, the government itself has backed a rent freeze. German ministers warned, “We don’t want to end up like London, where even lawyers and doctors have to live with flatmates.”

‘None of this has happened by accident…’

Berlin has further moved to renationalise privatised property, starting with hundreds of apartments on the grand Karl Marx Allee, once a showpiece for socialist East Berlin. The mayor said: “It...continues to be our intention to buy up apartments wherever we can, so that Berlin can regain control of its property market.”

Precisely. In addition, Britain should set up its own lending institutions for housing, to ensure that the wealth created by workers is used for the benefit of workers. Such a policy would be aimed at national independence and self-reliance. But it is a race against time: Britain is digging itself into a deeper well of foreign debt.

To all outward appearances the Treaty on the Functioning of the European Union exempts domestic housing policy from control by the Commission, but there is more than one way to skin a cat.

EU enlargement and free movement have put impossible pressure on supply, and successive governments have colluded to hand over British workers’ homes to transnational companies and foreign banks.

In 2018 the cap on borrowing for both councils and housing associations was removed: council housing itself became a fully fledged self-financing business. Hence the sudden flurry of overseas banks – from Australia, Japan, the US, France – jostling to lend to the social sector. In the quest for borrowing facilities leading up to the aborted Brexit date of 29 March 2019, housing association borrowing shot up by two-thirds.

Global operators enriched themselves from quantitative easing following 2008: they are equally unfazed by threats of a “no-deal” Brexit. As if the banking collapse had never happened, borrowing from multiple lenders is back in fashion, based on unsecured revolving credit facilities (ad hoc payment methods similar to using a credit card) from lenders based in many countries.

By early August 2019 more global investors, such as Wells Fargo, First Abu Dhabi and Goldman Sachs, showed up to take advantage of the new capital free-for-all in social housing. At least three – Lloyds, Goldman Sachs and the National Australia Bank – have a history of investigation for irregularities. This transition from accountable UK lenders to reliance on dubious international capital flows is putting working class homes at risk.

None of this has happened by accident. Every link in the chain of housing regulation has been forged by design. With Brexit on the horizon, what better time overturn decades of decline and design a plan fit for Britain and its people.