Skip to main content
Home » News/Views » Brexit: The death of ideology and the start of a polite revolution?

Brexit: The death of ideology and the start of a polite revolution? 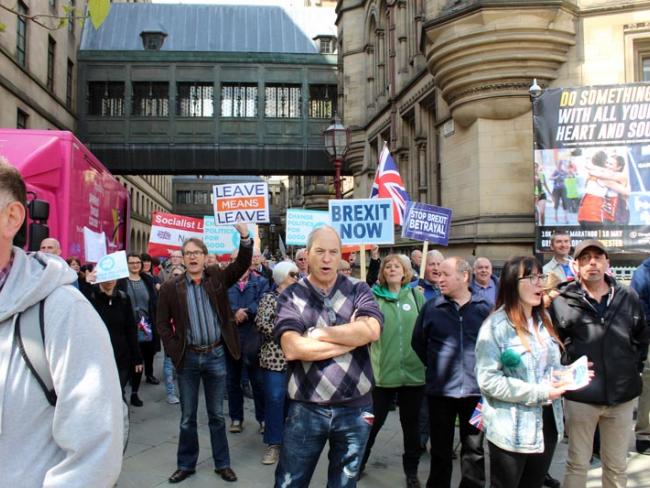 United for Brexit: marchers in Manchester, May 2019.

Three years have now passed and we still seem to be tied to the shackles of a dying supra-national organisation. This is despite being part of a 17.4 million voting block who defied the establishment and spectacularly voted to leave the EU. I shall not bore you with what followed as this tragic betrayal is well documented in theses and newspaper column inches.

What I do not believe is focused on is that Brexit has caused the radical erosion of British political ideology as we know it. The terms “left wing” and “right wing” are dead. This is now a battle of globalism and neo-liberalism versus nationalism with elements of libertarianism.

Britain is often referred to as a “small c” conservative country. One that is cautious of change and suspicious of radical politics; Brexit has all but killed this generalisation. I would argue the zeitgeist, in Britain, is one of unconscious libertarianism. Whereby most people (no matter who they vote for) would adhere to “I do not mind what you get up to provided it does not impact on me.” This is not to say that we are a nation of libertarians but, in my opinion, demonstrates why we have some of the best LGBT+ and equal opportunity rights in the world.

“Brexit has created an ‘unholy alliance’ between traditional ‘left’ and ‘right’ wing ideologies.”

This leads me on to Brexit. Defying the political class is not something synonymous with Britain. It is also not one which fits into traditional ‘left’ and ‘right’ wing ideological boxes. When I look at my local Leavers of Manchester group we have a presence from The Communist Party of Britain (Marxist – Leninist), Conservative Party, UKIP, Liberal Democrats, Labour and latterly The Brexit Party. When did you ever think you would see this meeting of minds?

Similarly, in the newly formed Brexit Party, you have Claire Fox (former Revolutionary Communist) and Annunziata Rees-Mogg (former Conservative) sharing ideas and a platform. Ten, or even five, years ago this would be unthinkable.

For me, this has been the major upset of Brexit in that individuals who have previously been sworn enemies are realising they actually have rather a lot of common ground. For example, I am not a communist but I find myself agreeing with their Brexit literature (especially on issues of imperialism) and share their disdain for the Westminster political class.

This ‘unholy alliance’ is of course in its infancy. I have seen Facebook posts labelling the elite wishing to stall Brexit as ‘commies’ when they are in fact quite the opposite. I have also seen wholesale attacks on Labour when Brexit could not happen without one third of their voter base voting leave and the excellent work of the likes of Caroline Flint (a remain voter who changed her mind due to her constituency’s high leave vote which is commendable), Kate Hoey, Dennis Skinner, John Mann and Frank Field.

“The start of ‘the Polite Revolution’ is here and British Politics will never be the same again.”

Without all these different ‘left’ and ‘right’ ideologies standing shoulder to shoulder, Brexit would not have (and will not) happen. This is exactly what the globalist ‘liberal’ elite do not want. It is why The Brexit Party stormed to victory in the European Elections and it why, whoever contests the next election, will have to form some form of pact with Nigel Farage as the two main parties see their core vote base diminished. It is why the start of The Polite Revolution is here and British Politics will never be the same again.

• The author is an active member of Leavers of Manchester. This letter, published with his permission, first appeared on the Leavers of Britain web site. Letters published do not necessarily reflect the opinion of the CPBML.