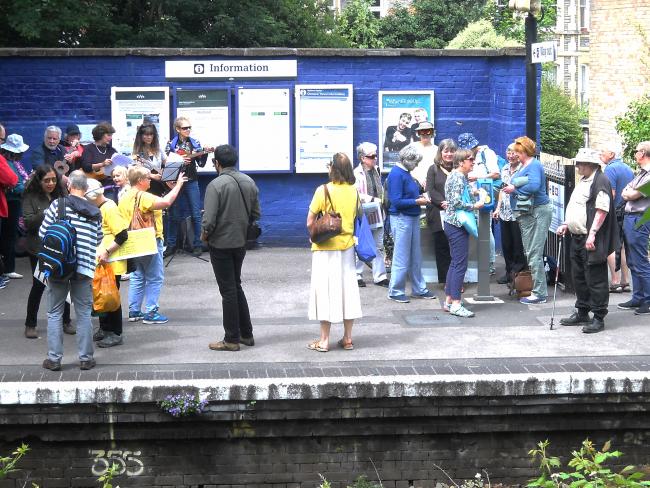 Sunday 9 June provided the opportunity for a fun day out with a serious message, organised by members of Friends of Suburban Bristol Railways (FOSBR).

The call is for a 30-minute service, 7 days a week on the Bristol Temple Meads to Severn Beach branch line. This runs for 13 miles serving the west and north of the city, an area that suffers from road traffic congestion and pollution. It’s also a scenic trip.

Around 60 people, a local ukulele group among them, gathered on Redland railway station to support the campaign. This includes online and paper petitions calling on the Department for Transport, West of England Combined Authority and GWR to agree to the demands.

FOSBR is a grass roots organisation which has existed for almost 20 years. It was set up initially to save the line from closure. They succeeded, but threats to the line have continued with cuts to subsidies and franchise changes. These years have seen constant, indefatigable campaigning to achieve improvements in reliability and frequency. Every tactic imaginable has been employed, as documented on the FOSBR website.

Their overarching approach has been to aim for infrastructure and service improvements as the way to increase passenger numbers and so secure the future of the line. That’s worked well with over 90 per cent growth in the decade to 2012 and over one million passenger trips by 2013.

But there is still much room for improvement. Passengers want and need a 30-minute service, 7 days a week. Past experience shows this won't happen unless people fight for it.

The great strength of FOSBR is its non-sectarian, non-Party political stance and its focus on the interests of local users. Affiliated organisations include rail unions, the local civic society, Labour Party wards, cycling groups and other rail pressure groups.

FOSBR is a local group, but it’s not parochial. It has made a submission to the Williams Rail Review looking at the future structure of the industry nationally. Their message challenges the review’s focus on existing franchise commitments and restoring service reliability.

In contrast FOSBR’s response has an emphasis on coordination and competent, professional management. Their straightforward plan, subtitled “car-free travel from your door” calls for a reliable half-hourly service across the Bristol area, robust infrastructure to unlock capacity and reopening stations across the network.