Skip to main content
Home » News/Views » Carillion on the brink

Carillion on the brink 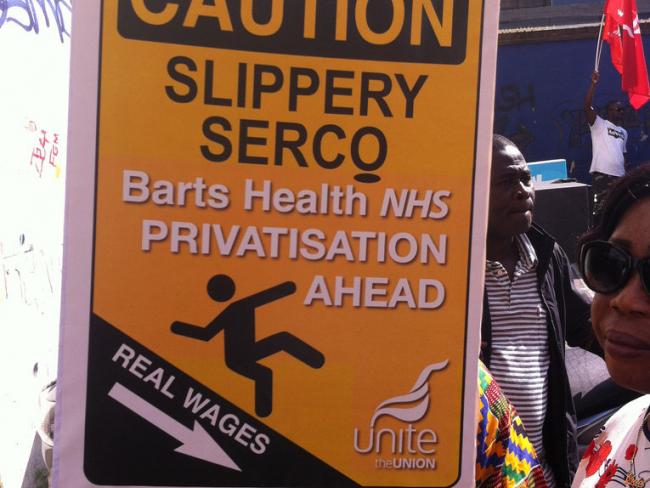 Carillion plc is a British company running construction and facilities management services across the globe. The company, with an annual turnover of around £5 billion, posted a £1.5 billion loss in the first half of 2017, sending shares plummeting in value.

This has been followed by a retreat from outsourced and private contracting across the Middle East, North America and Britain. Carillion intend to renege on health contracts in Canada and Britain. That means getting out of privatised healthcare provision in its entirety in Britain.

This explains the half-hearted bid for the £600 million outsourced contract at Barts Health NHS Trust in London, the UK’s largest, which was “won” by Serco last year. For outsourced services in healthcare this will bring chaos to trusts and staff as the NHS struggles to contain yet another financial crisis.

'Carillion intend to make thier employees pay for mismanagement and  greed.'

Carillion is trying to claw its way back from the brink of collapse by streamlining operations, job losses and a fundamental attack on the pension scheme. Carillion intend to make thier employees pay for mismanagement, greedy acquisition take-overs and expansion, failed contract management and staggering losses across over 23 major outsourced contracts.

The clear out of senior management figures since July resembles a massacre rather than individuals leaving to further their careers elsewhere! If Carillion goes bust then the model of private capital being showcased to provide public sector services will take a terrible blow. If Carillion goes bust then the “privatise the world” philosophy espoused by every UK government since Thatcher takes a terrible blow.

The philosophy of privatisation is to provide services as cheaply as possible yet maximising profit, and with speculation bordering on fraud. When that meets reality and it becomes clear that you cannot provide public services on fresh air only, then chaos and collapse follow rapidly.

The announcement from the government that a £1.34 billion contract for building the HS2 rail network has been speedily awarded to Carillion is no surprise. The government has reiterated that Carillion has its “full support”. In other words they daren’t allow Carillion to go bust and sink similar privateers.

There’s a lot of disinformation spewing forth about the future for Carillion. For instance, speculation that Carillion will be saved by some mysterious Middle East buyer. Or even more ridiculous that Serco, a major competitor in the same field, will swoop to seize Carillion’s assets. The reality is that Serco is as perilously close to crashing as Carillion.

The track record of the cannibalism of major acquisitions or failed acquisitions is that they all end in failure and disintegration. A few examples among many are Carillion’s own attempted take over Balfour Beatty in 2014, G4S trying to devour ISS in 2011 and  Tata Steel taking over the remnants of Corus (British Steel) in 2006.