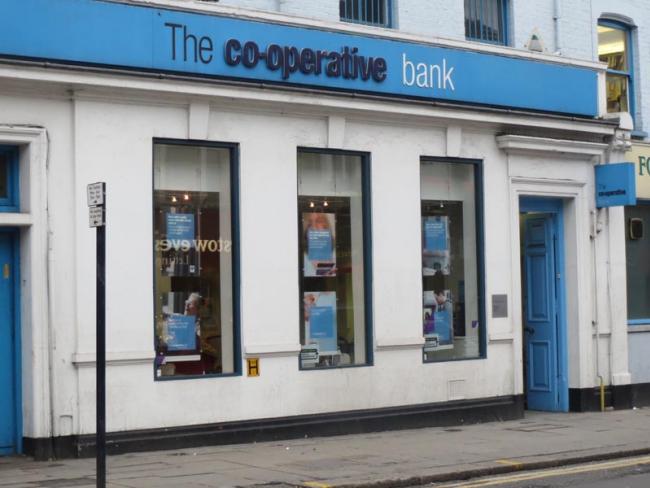 The old Co-op Branch in Walthamstow, east London, closed in June 2017. Soon there will be only three branches in London.

The Co-op Bank has announced a further tranche of branch closures, 27 branches by May 2018. This follows on the dozens of branches closed and the ditching of the Britannia Building Society brand since 2009.

Closures have accelerated since 2013 when the Co-operative Group, needing a cash injection of £1.9 billion, sought help from hedge funds and reduced its own stake in the banking arm to 20 per cent. Last year the bank was effectively taken over by US private equity companies.

The latest round of closures will leave just three Co-op bank branches in London, “light” footprint for a bank that claims to be a national player. Its main presence in the capital will be cash machines in the occasional Co-op supermarket (a presence which the supermarket claim is using to claim that it has “banking facilities”!).

Co-op Bank customers are supposed to feel reassured that the bank is signed up to the “Access to Banking Standard” and that every closure will have been subject to an Impact Assessment, just to comfort customers that the closure is in their interests. Rural or smaller communities know that losing the bank destroys a community just as much as closing a post office, library, pub, bus connection or the corner.

The Co-op justifies its “re-profiling” by promoting online banking and its new relationship with the Post Office. Why keep your own branches if you can piggyback on the privatised Post Office? Customer service staff are replaced with “live chat” as information technology replaces real people. Adverts even fatuously portray offshore call centres masquerading as experts on Coronation Street or EastEnders.

Information technology has been applied massively to work processes, “consumer choice”, marketing and so on in the past 20 years. But no one must be fooled that the motivation is anything other than reducing labour costs, speeding up production techniques (an online bank is no different from a production line) and maximising profits.