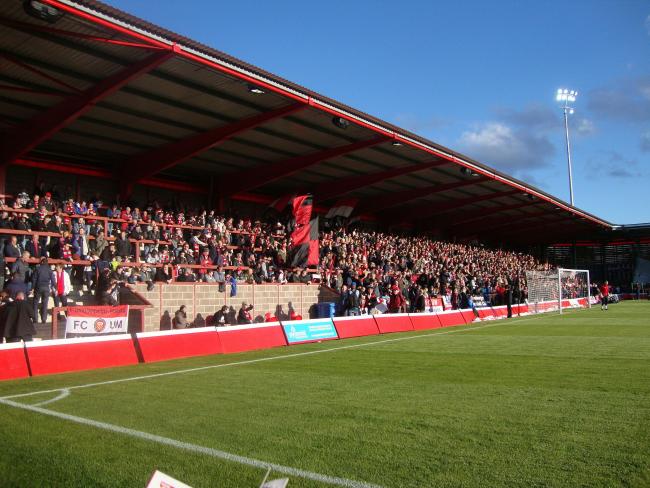 FC United moved to their own ground in 2015, 10 years after setting up

in reponse to the Glazer takeover of Manchester United. Photo Fcunited [CC BY-SA 4.0]

Thousands of football supporters up and down the country are throwing their season tickets back to their overpriced corporate-run clubs. There's a definite undercurrent among grass roots football supporters that the game’s up! No longer do they require heavy security at matches or kick off times to suit TV. No longer will they pay extortionate entry prices, then to be fleeced for more cash with overpriced food and merchandise.

The worm is quietly but surely turning. Some have set up new clubs after takeovers like AFC Wimbledon or FC United of Manchester, others have returned to long-standing non-league clubs.

Thorough a grand tour of broken but still beautiful Britain, we follow the author and his collection of rogues, misfits and trade unionists around the country. We see how a collective of working class ‎non-league supporters embrace the values of football where the shackles of Sky and BT sports are absent. If ever the half time tannoy at matches gives out the Premiership scores, it's met with cries of “not interested” or “no one here cares”.

Roberts recently arrived back in the UK after living abroad for 35 years. He follows Bromley FC through an eventful season and captures the spirit of a growing movement that has washed its hands of the multimillion business that football has become. He takes us on a walk through simpler pleasures where the fan feels empowered and not subservient.