Doctors fighting for the NHS 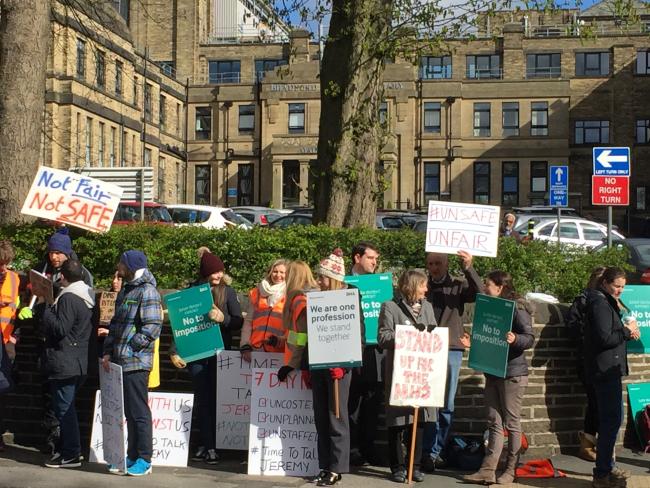 A long struggle. Doctors on the picket line in Bradford, April 2016

Junior hospital doctors in England have begun a new phase of action in response to the government’s attempt to impose new contracts. Strikes planned for September have been suspended, but stoppages announced for the following months will take place unless the government responds positively.

The BMA, which represents the doctors in the long running dispute, is calling on the health secretary Jeremy Hunt to halt the imposition and to restart meaningful talks about the contracts.

This is not an isolated dispute. The NHS faces challenges in almost every aspect of its activity. There is a deficit of £460 million this year, despite extra funds. But overall funding will be cut sharply from next year onwards. It is missing all key targets such as treatment waiting times and ambulance responses. Performance is declining and will continue to do so unless changes are made.

The NHS will find it hard to recruit the staff it needs, even if more resources become available. There are shortages of trained nurses, doctors and other medical professionals, with no realistic plans to rectify that. Indeed the government is making things worse. For example it is cutting bursaries and imposing full tuition fees on student nurses, midwives and allied health professionals from September 2017. That will reduce the number of people in training.

Against this background the junior doctors have so far been able to win and retain support from colleagues and patients alike. They have been well organised tactically flexible and imaginative about the scope of their action. They have responded to signs of progress in talks and have maintained the impetus of their campaign, despite hope of resolution being dashed several times. This shrewd approach will be needed to an even greater degree in the next stage of the dispute.

‘The doctors have emphasised that patient safety and the future of the service are their primary concerns.’

The doctors and their union have emphasised at every turn that patient safety and the future of the service are their primary concerns. The government on the other hand does not answer worries expressed from all sectors of the NHS about the risk to patients from understaffing and underfunding. It continues to lie about the implications of the seven day service it says it wants. As things stand that has not been costed, is not funded and could not be safely staffed.

Negotiations about a new contract have been going on since October 2013, aiming to replace terms last revised in 2000. All along the BMA has pointed out the risks to doctors’ welfare and patient safety; the government has not offered acceptable safeguards. This resulted in a ballot for industrial action in November 2015 and a series of strikes and abortive talks earlier this year. Hunt decided to impose the contract with effect from this August.

In July the doctors voted decisively to reject the imposition of a new contract, despite a recommendation in favour from the BMA. The result was 58 per cent against the contract on a turnout of 68 per cent, about 37,000 doctors. They believe the terms dictated by the government would be damaging for patient care and their working conditions and will be unworkable without additional funding.

The BMA immediately called on the government to respect the vote and to continue the contract negotiations. That did not happen, leaving the BMA no choice but to invoke the mandate for further action. It announced a full withdrawal of labour each month for five weekdays between the hours of 8am and 5pm. After hearing the view of other colleagues and administrators that the first strike period planned to start on 12 September was too soon to ensure patient safety, the junior doctors decided to suspend that round of action.