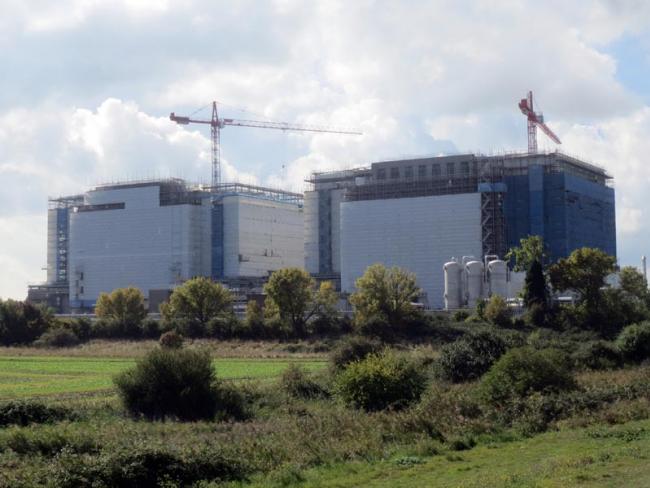 Out of action, permanently. Bradwell nuclear power station in Essex during decommissioning. Yet nuclear is vital to Britain’s future. Photo Workers.

What would it take for Britain to secure energy supply and why is it important?

Britain, like any nation, needs to have energy security. That means ensuring industry, services and the people of our country have the energy they need. At the moment we’re far from that goal.

These are political questions. They reflect wider current issues for the British working class. What’s a nation? And why does nationhood matter? Are society and politics about class? Or something else? And who decides on what’s essential and how to pay for the cost?

It’s helpful to talk about energy supply and security separate from climate change. There is of course a strong relationship both in reality and in people’s thinking – but they are not the same thing.

Energy is at the heart of modern life. Since the mid-19th century, that’s been about electrical energy in particular. Some arguments about energy supply and choices, when pared back, amount to a rejection of industry and technology.

Demands that energy production is “clean” are not rooted in reality and not materialist. And that almost magical view obscures the debate about what can be done.

Two views are foisted on our class, clouding debate and decisions. That makes it hard for us to tackle problems on energy – or even to set out clearly what they are.

The first is that energy use is dirty and polluting and must be cut, which quickly leads to “we are all doomed” pronouncements. Disagree and you are branded a climate charge denier.

Secondly, that we (Britain) must depend on others to provide solutions and act – “we can’t do anything alone”. This undermines thought about specific, local initiatives. Paradoxically it often goes along with the idea that somehow individual self-denial will “save the planet”.

At worst, promoters of these wrong ideas take a deliberate ideological stance: anti-people, anti-Britain, anti-industry, anti-working class, anti-life. They are a small minority.

Many people repeating these ideas have real concerns, but are sometimes unclear about causes and solutions. The debate on energy within our class must be honest and open; not patronising or rejecting differing views out of hand.

After all who wants pollution and the dangerous, unhealthy work usually associated with energy production?

And the false narrative on “climate emergency” – designed to create panic – is everywhere; it seeps into people’s thinking.

As concerned workers how do we counter this? Firstly, recognise that nation states exist and are the best (or least bad) political structure for workers under capitalism.

Transnational, global capitalism is the true polluter – acting only in the interest of profits. It is a false friend to anyone concerned about pollution, the environment and energy security.

The complexity and interconnection of modern industry, technology and science does not justify the globalist mission of destroying nations and their independence.

Nations need control of their energy supply and they need to make their own decisions about improving the quality of the environment, reducing CO2 emissions and cutting pollution.

Second, we should challenge assumptions that climate change necessarily means uncontrolled disaster. There’s a quasi-religious priesthood emerging which evangelises the idea. We’ve all heard the preaching – “everyone is guilty”, “think of the poor people whose homes will be wrecked”. They are the true deniers – they don’t accept the capacity of people to make change.

Third, we should assert wherever we can that control of Britain’s own energy supply is a fundamental necessity for our nation to thrive. We can start with simple things – for example gas storage capacity is far too low as a result of bad political and economic decisions, and can be changed. In the transition period we will still have to rely on fossil fuels. So government must plan for that, even allow new oil and gas exploration until we don’t need it. This begins to attack the philosophy of dependence.

The specifics of electricity generation and energy supply matter. We have to ask what’s stopping development of the best mix to ensure supply and to make it as clean as can be.

There are many existing and potential sources of energy. None of them are perfect, unlimited and clean.

Renewable: offshore and onshore wind; nuclear; solar; tidal; hydro – these current technologies are capable of further development, some more than others.

Renewable solutions, except nuclear, don’t provide the energy density of hydrocarbons and are not suitable to provide baseload. All have issues that limit their use: for example tidal isn’t producing results and has other environmental impacts. And hydro is maxed out in Britain.

Gas turbines, oil from coal and biomass burning are all limited in the long term – they produce CO2 and pollution, to differing degrees. But there are still exploitable oil and gas resources available in Britain.

Clean burn coal (killed by the EU and energy market), hydrogen and nuclear fusion all are some way in the future.

All forms of generation can be enhanced and made more efficient by storage technology such as batteries or pumped storage (although that can’t easily be scaled up). Hydrogen produced by surplus electricity is a form of storage. More storage capability is desirable, but it is not the answer to energy security.

Interconnectors (cables and gas pipelines) are in theory ways of sharing the generation load, as the National Grid does. But there’s no security where imported energy is outside national control. That has become very clear this winter with gas supplies.

At present financial markets and competition determine investment and priorities for energy companies. Their decisions are made for profitability and not need. That’s why “market” solutions to managing energy security – and emissions – are bound to fail.

Energy markets – electricity pricing by competition, carbon offsets so loved by the EU – have turned out inherently inefficient in practice, and feed speculators.

‘Nations need control of their energy supply, and they need to make their own decisions about improving the environment…’

For example, smart meters are touted as helping to manage energy consumption and to save the planet. But they are not promoted so you remember to turn the lights off. It’s become clear recently they are in reality the precursor to differential energy rates at different times of day.

High prices are not a way to secure our energy supply – even if the aim is to price energy so high that consumption is cut radically. And that’s unwise too, because it overlooks energy for industrial processes and hydrocarbons needed to make other products. Or are we to import all steel, plastics and pharmaceuticals?

Leaving aside the unrealistic systematic and extensive reduction of overall energy use, what might a national plan for electricity generation and energy security look like?

Move away from a single or few types of established technology – that is, plan for the future. Invest for the medium and long term in developing current sources and in technology that’s not yet mature and cannot yet be scaled up. But don’t cut current sources prematurely.

In particular, ramp up nuclear development. Not only rebuild Britain’s design and construction capability for large scale nuclear, but also promote small scale reactors (which is already happening) and other innovative ideas.

Adopt better measures than CO2 emissions for making decisions on energy sources. Taken over an installation’s lifetime, energy in versus energy out shows wind power, for example, as far less of a sustainable solution over the long term. And above all, decisions should be based more on national need and less on the financial returns for private investors (or overseas governments).

If that appears radical, it is. We are constantly told there is a “climate emergency” and a “looming energy crisis”. Yet the solutions being touted are the same as ever: use less, pay more, trust the market.

Capitalists are thinking how to reboot capitalism – we’re still in the wake of the 2007-2008 crash. One idea is that the digital age can be harnessed for a “great reset”.

At heart this means the destruction of productive forces, and not their expansion – leading directly to hyping climate change impacts and other doom-mongering.

Replacing gas boilers and internal combustion engine vehicles before truly viable alternatives exist will destroy some industries and expand others, but will leave its own giant, wasteful carbon footprint. Closing viable coal mines, or not developing new oil fields, just makes us dependent on global markets.

Human ingenuity and capability are the ultimate source of value and technological advance. The question is how to harness them to provide energy and deal with the impacts of climate change.

Workers by hand and brain – the people of Britain and other countries – will have to tackle those issues and resolve them. It’s not just about paying for “net zero” (though we will through taxes and lower living standards), but about taking an active part in all this.

In short, workers are the answer, not the problem.

Planning and control are essential for energy security and dealing with climate impacts. We have to address the energy mix in short, medium and long term, as well as continuity of supply. That requires direction of finance and investment, skills development and research.

This needs to happen at national level, where decisions can be made andinfluenced. Or do we step back and let global finance capital or other transnational bodies decide? And then we must ask where, in reality, does energy rank in British government policy? What’s being done, rather than just promised, and is it effective?

Exaggeration about climate change and belief that we must rely on other countries or global capital will undermine effective action. Given where we are in the public debate, these issues will have to be dealt with before Britain can make progress on energy.

• This article is based on the introduction to an online CPBML discussion meeting in November 2021.