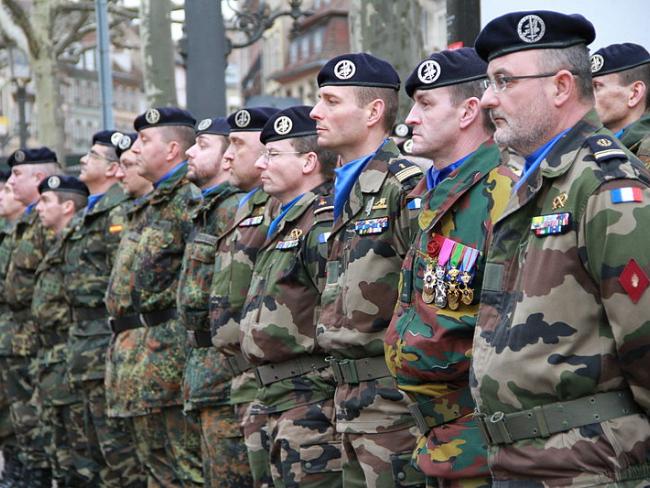 The Eurocorps on parade in Strasbourg after returning from a tour in Afghanistan, 2013. Photo Claude Truong-Ngoc (CC-BY-SA 3.0)

In this respect at least, the government has shown it respects our decision and does not want to absorb Britain’s armed forces into a Euro army. But risks remain and vigilance is needed, especially in the relationship with the European Defence Agency.

The European Commission calls PESCO the “precursor to an EU military”. PESCO participants must agree that a single rigid structure imposed by the EU coordinates all their defence decision-making.

The EU’s External Action Service says it is “a treaty-based framework and process to deepen defence cooperation amongst EU Member States who are capable and willing to do so. The aim is to jointly develop defence capabilities and make them available for EU military operations.”

Membership of the European Defence Agency is ruled out, but there may be some sort of affiliation. The EDA is core to future EU defence integration; formal UK adhesion beyond observer status carries budgetary obligations and political risks.

'The European Commission has never understood either democracy or adverse votes.'

Britain seems to be set to avoid being tied down to fixed treaty obligations. Michel Barnier, the EU’s Brexit negotiator, dropped the requirement of single market membership as a precondition of military cooperation. But he could not avoid linking the degree of cooperation to political engagement.

The European Commission says, “Through PESCO Member States increase their effectiveness in addressing security challenges and advancing towards further integrating and strengthening defence cooperation within the EU framework.” The Commission aims to start PESCO before the end of 2017.

The view from some of Britain’s military leaders is quite different. Colonel Richard Kemp, speaking for Veterans for Britain said, “EU defence integration clearly remains a threat to NATO, and to UK multilateralism inside Europe but outside the EU. EU ambitions are extensive and dangerous.”

And referring to the inference from M Barnier that the Brexit vote was a betrayal of the fight against terror, he added, “This is an insult to the electorate of the first order. But then, the European Commission has never understood either democracy or adverse votes. The EU has brought a lot of its terror-related problems on itself.”