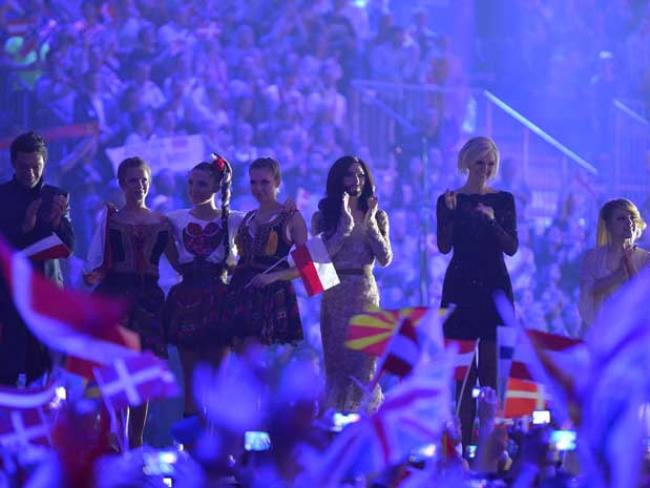 On stage during the finale of this year’s “song” contest. Photo Andres Putting (EBU)

The tastelessness and tackiness of the Eurovision “song” contest is legend. So much so that Workers and many others may have wrongly neglected its significance for too long. But there’s a lot going on there; pretty much all of it should trouble thinking workers.

To begin with, look who participates. Some countries aren’t even in Europe, Israel for one. Some countries aren’t even real countries...Israel for one. One which was, Yugoslavia, was banned from competing even before it was forcibly destroyed by NATO and the EU. And now, as well as the fragmented Balkan states, there’s the post-Soviet rag-bag of former feudal fiefdoms and wannabe 52nd, 53rd, 54th states of the United States of America, for which their membership of the EU and NATO is preparing them (or so their politicians think).

Ask yourself; why do so many countries who proclaim their right to be independent, to be different, all actually want to be the same? Leave aside for the moment the grinding monotony of the virtually identical “music” pumped out. (Though there was a time when this contest was predicated on contrasting national styles; how quaint.) Focus instead on the language.

Almost every act sings in English; North American English to be precise. Even entrants from countries proud of their language, such as France or Spain, frequently lapse into the sub-Californian whine that is now an element of what is described as cultural globalisation. In truth that is liberal-speak, a euphemism for old-fashioned US imperialism. Homogenised language is as much a part of that as uniform burgers across the world.

Wasn’t linguistic freedom part of what national minorities in the Soviet Union wanted? They are now separate countries; they said that meant freedom to express themselves in their own language, but perhaps it didn’t.

One of the lies held against the Soviet Union was that it imposed the Russian language on non-Russian nationalities, for example in the three Baltic states. In fact what the USSR did was to insist that everyone in the country was literate. That was no mean feat in itself, given that the rate of illiteracy in the non-Russian parts of the pre-revolutionary tsarist empire was commonly greater than 90 per cent. The USSR also aimed that everyone should be able to speak in one common language so that all citizens could understand each other, that language being Russian.

At the same time as creating literacy and mutual understanding, the USSR legally ensured that local languages were compulsorily taught and learned. If they were guilty of anything it was forcing people to learn two languages, to become bilingual – how terrible! The ruling tsarist class had always spoken Russian in, say, Turkmenistan, so the policy was that workers there be enabled to do so as well.

‘Almost every act sings in English. North American English to be precise.’

Speaking English in the former British Empire, India for example, is painted in the media as positive and modern, in contrast to the supposed oppression of speaking Russian in USSR. Soviet language policy could have been described as being not so very different in fact to aspects of proclaimed language policy in Wales now. Yet we see no international outcry over human rights in Wales.

But look at the present day: presenters, singers and audiences from Lithuania, Latvia and other parts of the former USSR all speak or sing in Californian. So much for their freedom & independence. Or perhaps that was what they wanted all along...

But this year’s Eurovision contest on 10 May really took the biscuit. Whenever Russia was mentioned we heard an orchestrated howl of off-screen abuse, booing and catcalls. We say “orchestrated” because the notion of anything happening unscripted at Eurovision is as unlikely as it was for Russia to win this year’s contest.

Subsequently it was claimed that this was due to Russia’s prejudice against homosexuals, there being a large gay audience for Eurovision. It was supposedly nothing at all to do with the EU’s (and therefore also NATO’s) continuing attempt to annex the Ukraine, and Russia’s attempt to stop them. Nothing at all. Oh no. This brazen effort to mobilise anti-Russian sentiment among gay workers is all the more brazen for being so crassly hypocritical.

The British media, no innocents when it comes to anti-gay prejudice, seem suddenly keen to right injustice and end discrimination. Perhaps they should explain that it was only after the destruction of the Soviet Union that homosexuality was recriminalised in Russia. They could also point out that the Soviet Union was the first country in the world to decriminalise homosexuality – in 1924! You’ll wait a long time before you hear Graham Norton say that.

So in effect we’ve exchanged anti-gay prejudice for anti-Russian prejudice; a big step forward there then Graham. And this peddling of yet another version of the hatred of the east and all things Russian fits perfectly with US, EU and NATO ambitions towards Russia. That’s not at all accidental when you consider the US involvement in promoting internal opposition in Russia, Ukraine and so on.

We will of course be told that “it’s all harmless fun”. A bit like how strippers used to be described when the link between that activity and violence against women wasn’t properly understood (and maybe still isn’t). Perhaps we should always be wary of the phrase “it’s only harmless fun”.