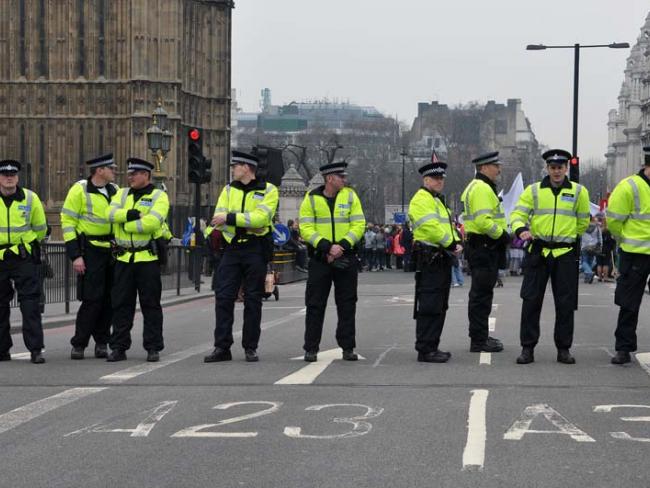 Police forming a barrier across the approach to Parliament Square. Photo 100 Words/shutterstock.com

Anybody who imagines that the threat to democracy in Britain comes from organisations like the EDL should study Home Secretary Theresa May’s latest proposals to “combat extremism”.  Under cover of the threat from Islamic radicalisation, she has renewed her plans – which she was forced to back down on in the previous government – for a new counter-terrorism bill which will introduce “Extremism Disruption Orders”.

EDOs will restrict the activities of people “trying to radicalise young people”.  Police will be given powers to apply to the high court to prevent “extremist individuals” from engaging in “harmful activities”, defined as any which risk public disorder, harassment, alarm or distress, or which create a “threat to the functioning of democracy”.

The revived plan would catch anyone who undertakes “harmful activities” for the “purpose of overthrowing democracy”. Any person or organisation subject to an EDO would be banned from broadcasting, and be forced to submit in advance to the police any proposed web, print and social media publication.  Their definition of extremism is vague, to say the least, so that it will mean whatever government and the police want it to mean and will be almost unchallengeable in the courts.

Last year the government was forced to back down over plans to make it illegal to be annoying in a public place, when the Lords defeated their bill by 306 votes to 178. If it had passed, anyone over the age of 10 could have been served with an indefinite injunction to stop annoying people, under threat of prison if breached.

Now the government is again seeking massive powers to shut up and even imprison anybody who says things they don’t like, by defining them as extremists. And if you imagine that this is a Tory thing, just remember that the last Labour government tried to criminalise “deliberately insulting a religion”. Before this election Ed Miliband promised in an interview with Islamic Voice to revive this by promising to “outlaw” Islamophobia – again undefined. This led Professor Richard Dawkins to challenge him as to whether he would go to jail for quoting Islamic scripture which says, “Whoever changed his Islamic religion, then kill him”. There was no reply.

These are the politicians who love to lecture other countries about democracy and point the finger at what they call “regimes” (although they have often been elected), which they define as oppressive and dictatorial towards their people. The fascist threat in Britain doesn’t come from the insignificant numbers of pathetic thugs of the ultra-right, with their occasional marches to (successfully) whip up leftist hysteria, and who end up either fighting each other, bankrupt, or in prison. It comes from parliament.