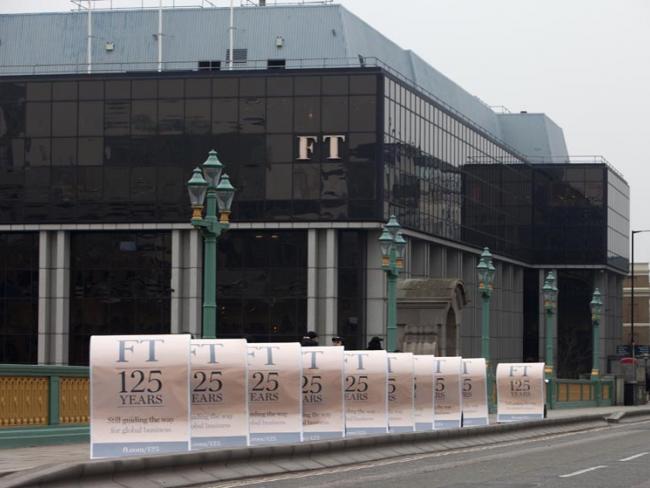 The FT offices at the southern end of Southwark Bridge, London, photographed in 2013. Photo: Financial Times (CC BY 2.0)

Publishing group Pearson is selling the Financial Times Group to Japanese firm Nikkei for £844 million – so another famous British firm is to end up in foreign ownership. As well as the 127-year-old newspaper, The Financial Times Group consists of a stable of other business publications, among them Investors Chronicle, The Banker, Mandate Wire, Money-Media and Medley Global Advisors.

The National Union of Journalists, which organises editorial staff at the newspaper group, responded quickly. “The FT chapel [office branch] will do whatever it takes to protect jobs, employee rights and independent, quality journalism,” said Steve Bird, the father of the chapel, in a statement.

“We were all very concerned at the speed at which the deal seems to have been made. The chapel is now considering putting together a charter setting out our principles on editorial independence and working practices.”

Many ex-FT journalists have voiced concerns about the editorial independence of the newspaper under the new owners, particularly as Nikkei gave little coverage of corporate scandals in Japan such as the Olympus accounting fraud in 2011 and the recall of Takata’s airbags.

Other issues to be resolved include the pensions situation, as well as the need for guarantees on terms and conditions, said NUJ national organiser Laura Davison.

The Pearson publishing group has been moving increasingly into the provision of education services in North America and in emerging markets. The group has been getting 90 per cent of its revenues from its educational book publishing business.

The Financial Times, which launched in 1888, has a combined paid print and digital circulation of 720,000, but 70 per cent of its readership is generated through its website.

The FT started charging for its website in 2007. The newspaper's digital subscriptions overtook print circulation in 2012, while tablets and smartphones account for about half of traffic to the website. It now has 504,000 subscribers to its website.

Nikkei is Asia’s largest independent business media group. It owns the flagship newspaper Nikkei (founded in 1876) and other operations, ranging from books and magazines to digital media, database services and broadcasting. Nikkei also charges for its website, but its morning edition has a print circulation of about 3 million copies, and half as many again in the evening.