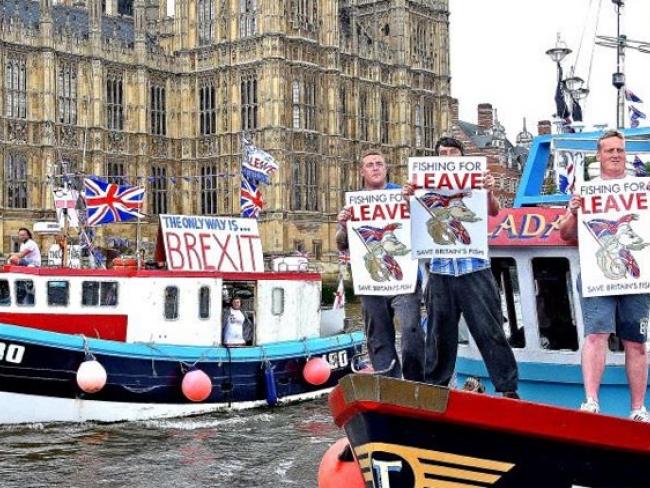 Fishermen demonstrating on the Thames outside Parliament on 21 March. Photo courtesy Fishing for Leave.

Fishermen reacted with fury to the government’s acceptance that the EU’s Common Fisheries Policy will continue to apply until December 2020, organising a flash demonstration on the Thames outside parliament on 21 March.

Fishing for Leave has called the transition deal a “second surrender” of Britain’s fishing, “a pitiful, disgusting, abject betrayal”.  It is also calling on the public to join the fight with them.

“We need YOUR support as the public, please keep your eyes open for what we have planned and turn out and get behind our fight to stop what’s left of our fishing industries being decimated in the 21month transition when our great nation will be an EU puppet state,” the campaign said on 25 March.

An MP commented that there are not many votes in fishing, meaning it’s not important. But fishing is an iconic control issue – people across the country care very much about it, and know about the lies and betrayal of prime minister Heath in 1973, who handed over the industry in order to be allowed to join the EEC. The result has been massive destruction.

The fishermen are being told to focus on post-December 2020. But that cuts no ice with them. They know that during the years between now and leaving the EU can enforce detrimental legislation over discards “to cull what’s left of the British fleet” along the 12-mile limit over which member states currently have an element of control.