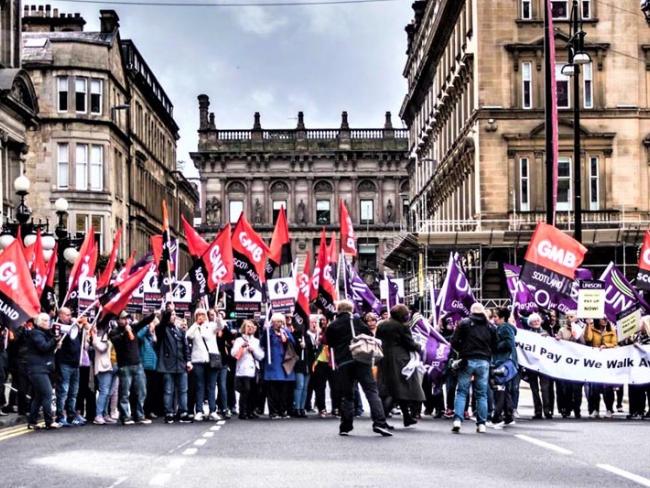 Twelve years of dispute over equal pay in Glasgow are coming to a head. Around 8,000 women workers, including cleaners, carers, learning support staff, and those in nurseries and administration walked out on 23 October on a two-day strike.

They finally decided to act after years of dispute without resolution. Similar action is likely during November and December if talks with the city council – one of Britain's largest – fail. The strike of sewing machinists at Ford, Dagenham in 1968 forced the Labour government of the day to pass the Equal Pay Act in 1970. The current strike will be the biggest action on the issue since then.

Two trade unions, GMB and Unison, have coordinated their members’ actions. Unison regional organiser Mandy McDowell stressed that the effectiveness of the action would be enhanced by their members ensuring that there is “full life and limb cover for services helping vulnerable people” during the strike.

Over a 12-year period the city council, under different political leaderships (first Labour Party, now Scottish National Party) has rejected and fought legal claims for equal pay. The arguments led all the way to Scotland’s highest court, the Court of Session in Edinburgh.

The city council had introduced a new pay and grading scheme in 2006 which intended to put an end to pay inequality. But it was riddled with pay discrimination flaws and it was not until 2017 that the Court of Session finally found in favour of the women workers.

One positive outcome for the whole of Britain was the resulting removal of tribunal fees. These particularly affected low-paid women workers arguing for equal pay.

Negotiations with the council have made no progress since the decision despite more than 20 meetings over a 10-month period. The 2006 scheme had led to 14 disputes, 10 strikes and over 12,000 legal claims.

Calls for strike action grew. In September this year 90 per cent of 3,000 Unison members in education voted for a strike. So too did 99 per cent of over 2,000 carers working for Cordia, the “arms-length” company created by the council. A ballot of GMB members saw 98 per cent voting for the strike.