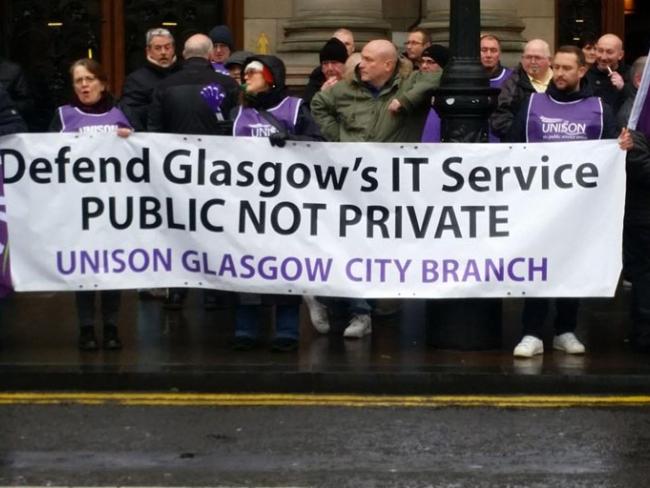 Successful strikes by IT workers at Glasgow City Council in December and January have halted the attempt to privatise £400 million worth of services.

The privatisation deal was effectively stopped after the strikes by Unison members established that they would be employed directly by Glasgow City Council rather than by the private contract holder, Canadian CGI (Consultants to Governments and Industries).

CGI had due to begin a seven-year contract to fully run the services from March. After Unison won the fight to maintain direct employment, SERCO, another global operator that had shared the operation of the services on a 50/50 basis with the council, has now challenged the legality of the deal.

Addressing a meeting of Glasgow Trade Union Council, the shop steward representing the workers explained how the city’s decision to go down the full privatisation route fitted in with the planned three-year roll-out of £135 million worth of cuts to council services.

The Labour-run council could not face implementing redundancies. Its solution was to let CGI do it instead.

Attempts to keep the relationship with CGI secret during 2015-2016 were uncovered by the union, and the council’s assurances that jobs would be protected became clearly untenable.

The steward said he was appalled that it was a Labour council, most of whom were trade union members, that was pushing through such a deal. And he was staggered by the repeated statements by a senior council executive admiring the ability of CGI to “provide resilience during industrial action”.

He agreed it would be no better if the SNP were in control of the council, but that "it is an ideological shift we're seeing and it's the Labour Party that's doing it."

The members were fully aware of the situation and pushed for action: the resulting strike ballot saw a 78 per cent turnout with 96 per cent voting to strike.

They were facing a council prepared to deal with a company aggressively seeking to take over all such local government work in Scotland. It would, said the steward, result in “all frontline IT services being in the power of multinationals, with controls flushed down the toilet and no evidence of resulting savings."

The various union representatives present agreed on pushing solidarity and getting resolutions of support to the workers involved.

The settlement ensuring continuing direct employment ensures that these workers remain council employees with guarantees of no compulsory redundancies or relocation. A fear had been the transfer of some services to a CGI call centre in Bridgend in Wales.

The union also established the right of IT workers to bargain collectively with Glasgow City Council. The action and its positive outcome resulted in an increase of 40 per cent in union membership in the council workforce.

Local councils, heavily indebted with the burden of PPP and PFI deals from the days of Thatcher and Blair are seeing the resultant infrastructure starting to crumble – witness the collapsing schools in Edinburgh, with that city now withholding over £5 million monthly in fees to the private sector owner.

A report by Professor John Cole, a construction industry expert, has analysed these defects and pointed to such problems with PFI being Britain-wide.

Although councils in Scotland are heading down the privatisation path (encouraged by the devolved Scottish government’s use of CGI, for example in a £6.5m contract for a new electronic ballot counting system), across Britain the tide may be turning.

More than a third of local authorities that had privatised have now moved back to in-house operations, for example, Kent and Dorset county councils. Liverpool did so in 2014, saving £30 million over three years.

In Glasgow, further action is planned. Arising from the strikes and the consequences for Glasgow, there will be a protest outside the Glasgow City Council budget meeting on Thursday 16 February at 1 pm.

And Glasgow Trade Union Council is organizing a rally against the cuts and privatisation on 11 March starting at Glasgow Green at 11 am.