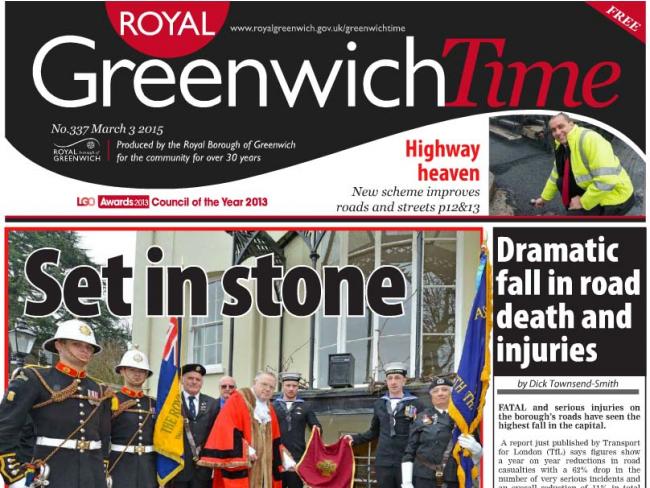 Under threat by government diktat: the council newspaper in Greenwhich, southeast London.

The Royal Borough of Greenwich has become the first local authority in Britain to have notice served by the government requiring it to close down the weekly free council newspaper to local citizens.

Greenwich is likely to be joined by Hackney, Newham, Tower Hamlets and Waltham Forest in the near future. Four out of five are Labour-controlled Councils.

The Tories have always attacked what they term “town hall Pravdas” in councils where they have no chance of winning, in an attempt to silence councils critical of government cuts. Greenwich is one of the London councils which has borne the brunt of central government cuts.

The government claims on one hand to promote ‘localism’, but then squeals that spending of local council money on issues of importance to local people is politically motivated. On the other hand it claims that free council newspapers damage the market share of free papers, which survive on advertising and the profit motive.

Following legislation introduced by this government, local authorities are forced to spend money – around £40 billion a year for Britain as a whole – in statutory advertising in the so-called free newspapers. It is, effectively, a subsidy to private media companies which form a monopoly in the media market and have clear political and funding donations links to the Tories.

Despite the handouts, local newspapers are increasingly failing to report on the activities of local councils, according to the National Union of Journalists. At the beginning of March it launched a campaign, “Local News Matters”, to draw attention to the crisis facing local journalism.

The journalists’ union has also been fighting for several years to uphold the role of council newspapers in keeping citizens informed. In January 2011 the House of Commons Local Government Select Committee endorsed the union’s opposition to government attempts to restrict the publication of council-run newspapers and magazines, saying the proposals “would have potentially negative implications for local democracy”.

The select committee found “scant evidence to support the assertion that council publications are, to any significant extent, competing unfairly with independent papers published in their locale”.

The Local Government Association has called upon the government to take a “reality check” over these politically inspired machinations. But a general election is coming, and silencing the opposition in the name of the free market is a long and honourable tradition of those who bang the drum of capitalist freedoms.