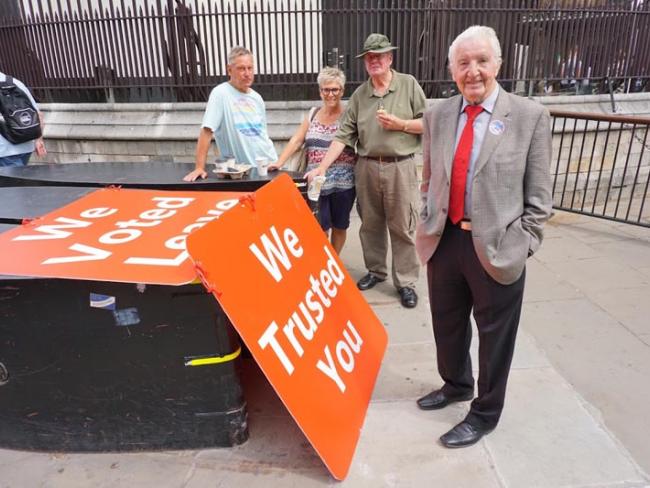 Standing up for Brexit outside Parliament: demonstrators with Dennis Skinner, a Brexit supporter. The longest continually serving Labour MP in Westminster, he was first elected in 1970.

The Brexit demonstrations in Parliament Square serve several purposes but first and foremost they are a means of holding to account those MPs who are working to undermine the democratic decision of the people. “Holding their feet to the fire” as one regular said.

They describe themselves as “a non-party political group of individuals – most of whom have done no political campaigning in the past – who have come together since December 2018 to remind MPs and members of the House of Lords of their commitments to honour the 2016 EU Referendum result.”

Like the MPs they expect that the end of July will be their last stand for a while as the summer recess is about to begin, but they are poised to return at any moment should there be a change in the parliamentary timetable.

Some of the demonstrators travel in from a distance, most are Londoners. Some have made a huge sacrifice of time and attend most days. Some come as often as they can. Others just stop by during their lunchtimes.

The demonstrators know they have an impact: MPs who support leaving the EU tell them repeatedly that they play an important role in ensuring Remain MPs know they can't betray 17.4 million people without a fight.

‘Without the demonstrators, MPs and Lords would only see the EU flag-wavers."

Without the Brexit demonstrators, MPs and peers would only see the EU flag-wavers in Westminster, whose primary purpose seems to be to figure in the backdrop of a TV bulletin and bellow, “Stop Brexit”.

At half term and school holidays the demonstrators have conversations with families holidaying in London from Yorkshire or Scotland or elsewhere in Britain – who are surprised to see the placards and who say that the media tell us that “London is all for remain”. (The 1.5 million Londoners who voted Leave have been conveniently neglected.)

Visitors from outside London are amazed at the volume of toots of support from black cab, white van and lorry drivers, not to mention the drivers on the 24 bus to Pimlico or the 88 to Clapham Common – yet the demonstrators hear it every day.

Given the historic location the demonstrators talk to people from all around the world as well. These regularly include people from other EU countries, who are rarely hostile and generally accept Britain’s decision. Some are keen to tell the demonstrators about their own efforts to extract their countries from the EU.

Ever wondered if Britain’s decision to leave the EU has a world historical significance? Australian and US citizens saying that “we hear a lot about this at home but we just don’t understand it” and wanting to hear the demonstrators’ perspective remind you that our decision has shaken political establishments far from these shores.

The open top tour buses now have to explain to their passengers about the demonstrations, so even more of the world is hearing about Brexit.

But this slightly surreal aspect of the demonstration underlines our weakness: we are not out yet.