How privatisation is pushing rail to the brink 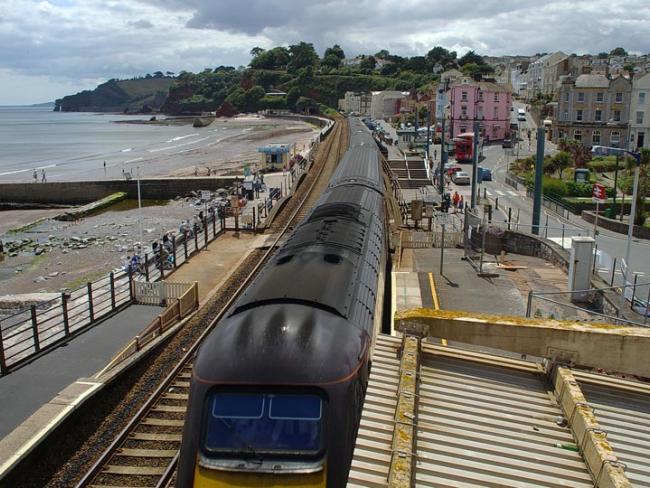 A sight from the past: Cross Country Intercity 125 heading along the sea from Dawlish to Exeter – now 22 of the 125s are in storage, replaced by new Hitachi engines. Most of Cross Country’s fleet is now too susceptible to salt to run on the line when seas are high, unlike the 125s! Photo mattbuck (CC BY-SA 2.0).

Train drivers at the recent Aslef conference in Leeds overwhelmingly voted down a motion intended to reverse their long standing policy of opposition to EU membership. The 77 to 3 majority effectively reaffirmed the union’s pro-Brexit position, along with the argument that Aslef should not support Brexit until after the election of a Labour government – an argument sadly finding favour in other unions.

As the Aslef Vice President explained, nothing had changed since the policy was originally adopted, with the EU still a capitalist trading bloc that is beyond any reform.

Aslef’s clarity is in sharp contrast to the confusion displayed at the recent conference of its sister rail union, the TSSA. It passed resolutions for properly funded social services, expanded public ownership, increased living standards and trade union rights. And then, remarkably, saw the solution to these issues as remaining in a capitalist EU – which is all about increasing privatisation and attacking the rights of workers (see Workers pay the price of the European Union)!

Of course the future of the rail industry is intimately bound up with the issue of Brexit, something that both Aslef and the RMT understand, and the TSSA doesn’t.

No British government will be able to return the railways to public ownership and control without infringing the EU’s directives which require competition. This is shown by the French government’s failure to protect the state-owned SNCF from private passenger trains even on inter-city routes, despite intense opposition from the trade unions.

The dire state of the railways in Britain is multifaceted – illustrated not least by the two-year-old, outdated franchising schedule on the Department for Transport (DfT) website. As one rail pundit put it: “Can’t be arsed, too embarrassed, or just overlooked”.

The DfT has plenty more to be embarrassed about after the failure of Stagecoach, the first company to win a franchise, now awarded to Abellio, owned by the Dutch state railway NS. It takes over in August, adding still further to the massive chunk of Britain’s passenger trains already run by foreign state-owned rail corporations.

British-owned Stagecoach has threatened to leave the rail industry, saying it can’t make enough profit. It faces major financial problems with its South West franchise, and it looks like the company will be forced to demerge its rail and bus businesses.

Not that Abellio/NS haven’t got their own problems. Their record in running Scotland’s train services has been woeful, although the Scottish administration has been too timid to remove the franchise from them. The company has also been criticised for delays and cancellations caused by cutbacks to their Greater Anglia services. Back in the Netherlands, rail staff recently took strike action in defence of their pensions.

SNCF’s British subsidiary Keolis is meanwhile doing very nicely out of the British taxpayer-funded railways. It recently a rise in pre-tax profits of 15 per cent, attributing that to the award by the Welsh government of the 15-year Wales franchise.

Stagecoach remains a minor partner in the Virgin Trains West Coast franchise but is barred from bidding along with its Virgin partners for the franchise replacement, which includes running the first trains over the new HS2 route. Virgin, Stagecoach and their new French state partner SNCF are currently pursuing a legal claim against the DfT, as is Stagecoach over the East Midlands franchise.

Virgin, perhaps seeing the writing on the wall, is also attempting to stay in the game by running trains in competition with the new West Coast franchise. It plans to use “open access” to start a new service between London and Liverpool using redundant trains from the East Coast.

The proposed new service would require passengers to have a seat reserved in advance, with no walk up and go arrangement. This is a model borrowed from the airlines that Virgin has very publicly advocated to Keith Williams, who is leading the rail review. The company has been ridiculed by many in the industry for failing to understand the nature of Britain’s railways.

The flaws in the privatised passenger train model is further shown by Virgin’s proposed use of 30-year-old trains displaced by new trains on the East Coast route. Under British Rail, older rolling stock were “cascaded”, displacing even older vehicles, or used to strengthen existing services.

But in the privatised and fragmented railway world, perfectly good trains are now rusting away in sidings, and are likely to be scrapped before long. New Eurostar trains are displacing the original ones but instead of allowing other operators to get their hands on these trains, in use for less than 25 years (and in some cases, barely used at all), they are being sent for scrap.

This is at a time when passenger numbers are again rising to record levels. The Office for Rail and Road (ORR) just announced that 1.759 billion passenger journeys were made in the 12 months to the end of March 2019, another record high following a short period of slight decline.

Overcrowding is now commonplace, not just on peak hour commuter trains, but more often on inter-city long distance services. The Cross Country franchise in particular is crying out for more trains to alleviate severe overcrowding on services that link most major cities outside of London.

Yet most of its current fleet is unable to run past Exeter when the tide is in as their electronics are too susceptible to salt water!

The Hitachi trains are also now running on the East Coast main line, and 14 more will be added, with over 100 coaches, at the end of this year.

While trade unions and passengers would rightly argue that there needs to be much greater investment in new trains, the industry is struggling to keep up with demand. British Rail would have sensibly used the older valuable assets to plug the gap until new vehicles are available. At least Abellio got something right in bagging nine of the IC 125s for service in Scotland.

But the madness doesn’t end there! Despite the lack of train capacity to meet demand, three-year-old trains are about to be taken out of service on the South West franchise because of the complexities of the contracts that surround the recent refranchising of those services. As things stand, they too may well find their way to a scrap heap very shortly.

The German state-owned company Arriva looks set to give up its Northern franchise. Industry insiders apparently believe that the company is going to go bust before the end of the year. This comes after the mayors of Greater Manchester and Liverpool City Region demanded that Secretary of State “Failing” Grayling terminate the contract as soon as possible following criticism of Arriva’s management of the local train services across the north of England.

Both TSSA and RMT have backed the mayors’ call. They point to the cancellation of 23 per cent of services due to driver shortages, 15,800 service cancellations, 18,696 part cancellations, 28,198 short formed trains, and a whopping 258,266 occasions when a train failed to make a scheduled station stop!

A paltry pay offer by Northern to the unions will almost certainly result in industrial action unless the offer is rapidly improved. Strikes will cripple the company, and drive the nails into Northern’s coffin.

Grayling has at least had a setback at the hands of rail workers and their unions. In the face of threats of industrial action, both the RMT and TSSA won an inflation busting pay increase for the majority of staff, and the TSSA is currently considering the best offer in eight years for its manager members. Despite confusion over Brexit in some quarters, organised labour is alive and kicking!