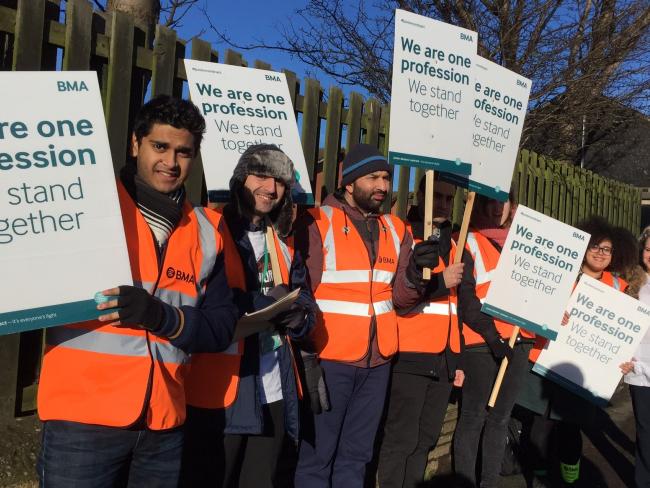 Hospital doctors were on strike again on 9 and 10 March. Picket lines were well populated on both days as action against imposition of the junior hospital doctors’ contract continued across England. This is one aspect of wider events affecting the NHS.

There was no loss of momentum following on from the previous strike on 10 February. Full emergency cover was provided as before. A number of those taking part used the 48-hour period to teach life-saving skills to parents, give blood and listen to patients’ questions and concerns.

Public support was evident at picket lines. A poll conducted by Ipsos Mori on behalf of the BBC also indicated 65 per cent support amongst a representative sample of the adult population. But even so misconceptions remain, particularly about changes to pay.

Doctors have not been offered a 13.5 per cent pay increase as the government would have everyone believe. This pay has been added to their standard contract but at the same time premium payments previously paid for working unsocial hours have been removed. No new money will be paid to junior doctors under the new pay arrangements.

All negotiations have been on the basis that the contract has to be incorporated within the existing manpower and financial envelope. Yet Jeremy Hunt, the secretary of state for health, has an internal briefing detailing the extra resources needed. The estimate to implement his proposals is for 11,000 more staff and funding of almost £1 billion annually.

Knowing that background it is cynical and misleading to suggest that junior doctors, who already work weekends, are standing in the way of a seven-day NHS or that imposing a new contract would deliver it. A significant number of NHS Chief Executives are against contractual imposition because deploying a fixed manpower resource at weekends simply diminishes the number of doctors available to support wards and clinics during the normal working week.

‘The new contract is potentially detrimental to patient safety.’

Professor Don Berwick, the governments’ former patient safety adviser, was previously asked by the Prime Minister to carry out a review after publication of the Francis Report into the breakdown of care at Mid Staffordshire Hospital. Professor Berwick declared that the proposed new contract is unfit for purpose and is potentially detrimental to patient safety. He has taken the view that excellence in the delivery of healthcare is not best achieved in conflict with the future medical workforce. Imposition makes no sense at all to him apparently.

For the government, Mr Hunt seems determined to exacerbate the dispute. He appointed Dame Sue Bailey from the Academy of Medical Royal Colleges to conduct an inquiry into the morale and welfare of Junior Hospital Doctors on the same day that the new contract was imposed. And his statement in the Commons on 9 March about clinical errors came across as cynical even to the handful of MPs that bothered turning up to listen. Mr Hunt made a show of encouraging honest self-criticism and learning from events at Mid Staffordshire. But he then used the occasion to again criticise doctors, while failing to acknowledge excessive hours as a cause of error.

Errors can even happen in government. Finance promised in the Chancellor’s Autumn Statement to support mental health services has failed to reach the front line because Mr Hunt neglected to ensure that it was ring-fenced for the prescribed purpose. Incompetence like this disadvantages vulnerable patients unable to access care close to their homes.

The BMA has secured increased investment of £220 million into general practice. This is made up of a 1 per cent pay uplift plus reimbursement to meet rising expenses, such as higher Care Quality Commission fees, practice upkeep and staffing costs. The BMA has not conceded any new additional clinical workload requirements for inclusion in the Quality and Outcomes Framework.

A judicial review has been launched following revelation that the government failed to undertake an Equality Impact Assessment prior to its decision to impose the new contract on junior doctors in England. Even if it fails to secure a declaration that the secretary of state may have acted unlawfully, it forces him to justify his actions in a legal forum.