Junior doctors' dispute: the end of the beginning 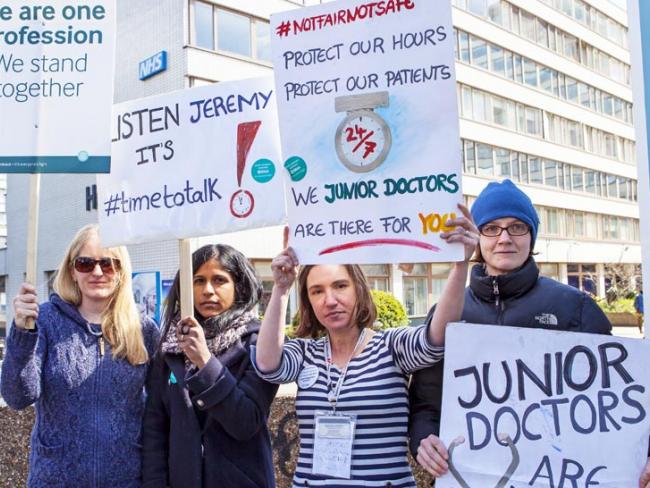 In dispute for over a year, junior hospital doctors have had to draw back from their planned series of five-day strikes against an unsafe contract. But it’s a protracted struggle…

Junior doctors have been struggling with the government about new contracts since 2013, and in open dispute for nearly a year. They have been tactically astute throughout. The decision to suspend their proposed rolling programme of five-day strikes up to Christmas shows care and common sense. Theirs is a protracted struggle. This is a time to regroup and reflect.

At the end of May the doctors enjoyed support from patients, the public, and their own wider profession including NHS managers. Pressure was mounting on Jeremy Hunt, the secretary of state, from all sides. Fourteen Medical Royal Colleges had each written to the prime minister asking him to personally intervene in the dispute.

The Commons Health Select Committee chaired by Sarah Wollaston, a Conservative and former general practitioner, wrote to him insisting that there had to be a negotiated settlement. This was quickly followed by authoritative statements from the Academy of Royal Medical Colleges and the Confederation on behalf of all NHS chief executives that imposition of the contract was not in the interest of the service or its patients. Opposition to a cabinet minister on this level is unprecedented.

Hunt was eventually forced back to the negotiating table in July for talks that went on for almost two weeks. The BMA felt able to recommend the amended contract which emerged. It went some way to addressing outstanding issues related to working conditions, recruitment, workforce planning and maintenance of quality standards.

In spite of this, BMA members voted decisively to reject it with 58 per cent against on a turnout of 68 per cent. They continue to believe that the terms dictated by the government would be damaging for patient care and their working conditions. They rightly judged that 7-day working cannot be implemented without additional funding.

The government declined the opportunity to respect the vote and to continue negotiations. That left the BMA no choice but to invoke their mandate for further action. It announced a full withdrawal of labour each month for five consecutive working days between 8 am and 5 pm.

Reservations quickly emerged about risks to patient safety and the integrity of the wider service once the series of rolling five day strikes was announced. Significant concerns also began to be expressed from within the ranks of junior doctors themselves. As a consequence a decision was taken at the end of September to suspend the planned action. The previous wide consensus has to be re-established if this dispute is to reach a satisfactory conclusion.

In the interim Justice for Health, an independent body established by nationwide subscription, went to the High Court. It challenged the secretary of state’s assertions that he had the power to impose the proposed contract and that it was beneficial to the care of patients. The Department of Health said that the case presented was “without merit”, and the Court agreed.

Workers are used to courts rejecting their arguments. But some of the conclusions reached by Mr Justice Green in this case are of interest. He said “This case concerns a challenge by a group of junior doctors who object to the manner in which a new set of terms and conditions of employment are to be rolled out across the NHS. The expression ‘junior doctors’ is a misnomer. It includes, in addition to doctors in training, hugely skilled clinicians and practitioners who routinely perform some of the most complex medical procedures, some of whom have many years of experience and are on the cusp of becoming consultants.

“The issue of the proposed new contract generates strong feelings…Much of this sentiment is of a general nature and whilst undoubtedly heartfelt is not always of direct relevance to the quite specific legal issues that I have to decide.”

Green emphasised that he was not drawing any conclusion on the competing arguments about the merits or otherwise of the new contract or expressing any view about the arguments over the seven-day NHS or weekend mortality rates.

Even so Green rejected the doctors’ case that Hunt had exceeded his powers. He went on to say that “an important reason leading the junior doctors to embark upon this litigation was their concern that by virtue of the Minister’s decision every possible negotiating avenue had been closed off. One significant consequence of this litigation therefore has been that the Secretary of State has...taken the opportunity to put his position beyond doubt.”

No power to compel

The judgement summarises Hunt’s position as follows: he does not have the power to compel NHS employers to introduce the proposed terms and conditions – in principle they are free to negotiate different terms. Further, it said that Hunt considers the scope for individual negotiation is limited because he has achieved consensus with employers that the proposed new terms and conditions are a fair and workable basis upon which to proceed.

‘It is not for the courts to determine whether the views of our junior doctors have merit.’

Dr Ellen McCourt, BMA junior doctor committee chair, said the concerns of junior doctors must still be addressed before the contract comes into effect. She said that the result should not be viewed as a win for the government, adding that “This ruling will do nothing to address the fact that morale among junior doctors is at an all-time low. Nor will it quell junior doctors’ concerns about the imminent introduction of a flawed contract they have rejected, or the deep sense of anger and mistrust that has built up towards the government over the last year.”

It is not for the courts to determine whether the views of our junior doctors are with or without merit. Our class ought to decide that. If the better part of 50,000 front-line clinicians committed to the care of people who are ill and infirm say that their proposed new contract is unsafe for patients; then it’s unsafe for patients. Skill and knowledge count – that’s the way of our class.

Creaking at the seams

As things stand we have the lowest proportion per head of population in the developed world of medical and nursing staff and hospital beds. In pursuit of a manifesto commitment, Hunt seeks to deploy junior doctors over seven days in a service already creaking at the seams.

These young people have acted on behalf of us all. It is the hardest thing for a doctor to contemplate any form of industrial action. In doing so, they have shielded consultant and GP colleagues from similar contractual attack. They have protected those within the related professions too. It’s a pity then that unions claiming to represent some NHS workers see machinations within the Labour Party as more important than defence of our health and social services.

Junior doctors are the consultants and medical educators of the future. Their memories are long and they are unlikely to forget how they have been treated. This dispute is not at an end or even at the beginning of the end. It’s at the end of the beginning. The junior doctors in dispute will determine the future action necessary to secure the NHS and their place in it on our behalf.