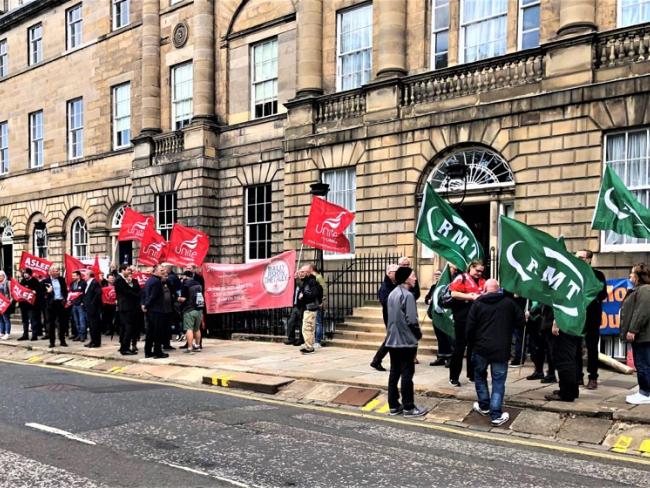 In a remarkable show of strength rail unions RMT, Aslef and TSSSA plus Unite came together on 22 September to demonstrate at Bute House, the residence of First Minister Nicola Sturgeon, on Wednesday. Their message: that there are just six months left to save ScotRail.

ScotRail, run by Abellio, plans to cut 300 services a day – amounting to more than 100,000 train journeys a year. Abellio is wholly owned by the Dutch national rail operator.

Just two hours later, the SNP–Scottish Greens coalition in the Scottish parliament voted down a motion supporting the ScotRail workers and asking the Scottish government to intervene to prevent proposed cuts to rail services and resolve the protracted disputes in the industry.

Aslef’s Scottish organiser, Kevin Lindsay, commented at the demonstration: “We want to see a modern clean green affordable and reliable train service that meets the needs of the people, communities and businesses we serve. Abellio ScotRail – aided and abetted by the Scottish government – wants to slash services (which will affect passengers and businesses) and cut jobs (which will affect our members).

“We want the railways to thrive.”

“Abellio appears perversely to want the railway network to contract and decline rather than expand and grow. But we want the railways to thrive to help our economy to succeed. Because rail is the green transport solution, it would be ironic if in the year this country hosts COP26, Abellio ScotRail drives people and goods back onto our roads.”

A statement from the Unite union added: “Abellio are leaving Scotland's railways but they are running a policy of scorch & burn with our members’ terms and conditions before they go. We have six months to save Scotland’s railways from pillage – and that starts today.”

Speaking at the protest, Regional Officer Pat MacIlvogue emphasised, “Unite members will take industrial action to save their pay and conditions. Abellio are looking to strip Scottish railways of every asset. Transport Scotland Director Bill Reeves acknowledged that when Unite highlighted concerns about Abellio’s accounts.”

RMT general secretary Mick Lynch pointed out, “The Scottish government is managing the ScotRail franchise under its ongoing Emergency Measures Agreement and it has the power to block the service cuts being proposed. It cannot evade responsibility over this issue.”

TSSA general secretary Manuel Cortes said in a statement, “We also protested against the Docherty Report which disgracefully recommends using the Covid-19 pandemic as ‘cover’ to cut services, jobs and ticket offices ­– a real slap in the face for workers who put their lives at risk running trains through the pandemic.”

Cortes noted that the union had invited Nicola Sturgeon to come out on Wednesday to talk face to face to the people who really understand how ScotRail works – the ones who work on it every day. Needless to say, she didn’t.

A joint declaration from all four unions said, “We have the unprecedented situation where all four unions are in dispute with an employer that appears to have no idea how to run a railway. Abellio’s shambolic mismanagement threatens to leave our railways in crisis.”

The future of the rail industry
British steel betrayed by government
In the balance - progress or decline for rail?
HS2 – The Great Northern Train Robbery
ScotRail: SNP bluster