Learning how to organise again 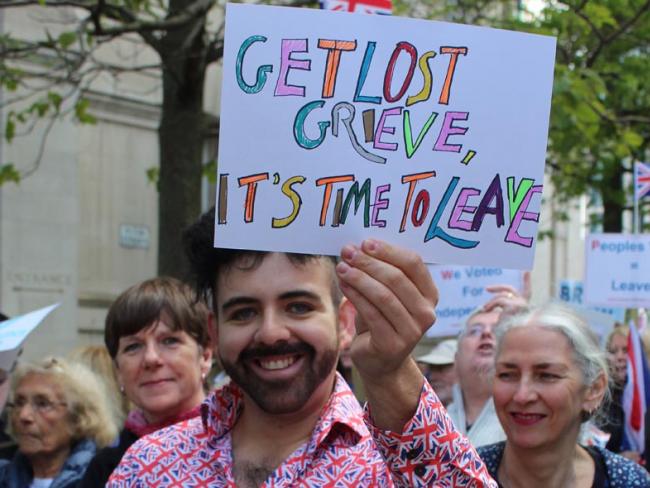 Demonstration organised by a Leavers group in Manchester, May 2019.

After the referendum of 2016 activity to support Leave lapsed, as if the job were done. That has changed. Since the traitorous “Withdrawal Agreement” last year new groups have formed and old ones revived. With no organisation capable or willing to represent them, people are learning once more how to organise and finding new ways to do so.

That was unexpected, above all by the political class. The lesson now learned is to trust no one.

One result of that awakening was the success of Brexit Party candidates in the EU elections in May. The new MEPs are well aware that they were elected solely to help leave the EU – and not to join the EU political establishment.

Henrik Overgaard-Nielson is one of three Brexit Party MEPs elected to represent North West England. A Danish national who has lived in Britain for 20 years, he was co-chair of the “No” campaign during the Danish referendum on the Maastricht Treaty.

He decided to stand as a Brexit Party candidate because he did not want to see a repeat of the experience of the people of Denmark. They rejected the Maastricht Treaty but were made to vote again and the result was overturned.

Henrik and other Brexit Party candidates spoke on 4 May at a rally in Fylde, near Blackpool. Henrik is a dentist; early in his speech he said that he was a trade union representative. The audience burst into applause. They appreciated someone taking on the task of representing their colleagues.

The TUC and many trade unions appear to have turned their backs on the working class and our needs. That has been happening for a while, but the Brexit vote and its aftermath have brought it to the fore.

Leavers of Britain is one of the notable organisations thrown up in the past months. Anyone, anywhere, can organise and advertise an event through the website. This can be a social meet-up for Leavers in an area, a street stall with leaflets, a protest or a debate.

Leavers of Britain (LoB) grew out of Leavers of London. Started by Lucy Harris, the idea was for social gatherings as a support for Leave voters, especially those that felt isolated or ostracised. Their regular social events resulted in a large number of people willing to do more.

When circumstances called for protest, outside Parliament for example, Harris was able to ask for support and could rely on willing helpers to materialise. As Leavers of London grew, she had the vision to set her sights on the whole country. And so Leavers of Britain was born with an ethos of do it for yourself, but you can learn from the energy of others.

Many new Leavers groups were clear from the start that they wanted to be active. Parliament and the rest of the establishment wanted to overturn the referendum decision and keep Britain tied to the EU.

Members of these groups wanted to ensure a clean break from the EU. They wanted to act and take responsibility as they were tired of waiting for politicians or others to do so. To most the idea of organising purely social gatherings didn’t strike a chord.

LoB isn’t a campaigning organisation and wasn’t intended to be so. But it is serving a purpose in stimulating action and debate.

Harris, as director of LoB, said that groups should not be the key organisers of local marches. So those in Nottingham on 13 April and Manchester on 11 May were organised by working with non affiliated groups and billed as “March4Democracy”.

These were successful opportunities for Leavers to be visible. People relished them and had the same sense of a joyous gathering and celebration as the national Leave Means Leave rally on 29 March. The message: politicians might be dragging their feet but “we voted to leave and we will leave”.

This organisation and its members are still trying to find a way forward. There is much discussion both within a national group and across regions. So for example the success of March4Democracy changed views on whether LoB groups should organise wider events. Group organisers are talking to one another and appreciating the mutual support. Many find being part of a national group (or “branding”) useful but some are saying that they will not be instructed on how to work.

The progress and developments within LoB encapsulate the challenges for everyone in trying to find new ways of democratic expression. We will have to find means of overcoming any disagreements and setbacks – the more so as visions for Britain post-EU will differ widely.

The gain is the increase in class activity. As one of those involved said, “We all want real democracy – instead of the sham that is parliament. We need to find a way of working democratically within our groups.”

Harris was approached by the Brexit Party to stand as one of their candidates in Yorkshire & Humberside at the EU elections – and was successful. So although LoB is cross party and not affiliated, its activity could have been construed as support for a political party during an election.

The real risk was a challenge by the Electoral Commission or charges of fraudulent use of funds. So Harris asked groups to either stop all activity or change their branding. Many agreed but some dug their heels in and refused to do either.

There’s also been debate about the march in Castleford on 23 June. The organising group has used the slogan “Kick out Cooper” – Yvette Cooper, the local MP has been instrumental in trying to stop Brexit despite 70 per cent of her constituents voting to leave the EU in the 2016 referendum.

Harris thought the slogan too negative and aggressive. She preferred the focus to be on commemorating the third anniversary of the referendum result by demanding Brexit and democracy. The march went ahead but Leavers of Britain and at least some of the northern groups will go their separate ways.

Warrington4Brexit has done a fantastic job organising Leavers in their area. The group pre-dates LoB. But it made the mistake in announcing that it was boycotting the March4Democracy in Manchester, because of objections to one speaker. But they did not first take views across their group and reach agreement.

People from the group and others from Warrington attended, though some stayed away. But sadly the group has been weakened, hopefully not permanently. That’s another hard won lesson.

Trade unions developed in struggle as workers sought to protect each other. They were not imposed from outside; they created a democratic way of working. Much of that has been taken for granted – at the cost of losing their purpose and their democracy.

There are lessons for the future of unions in the energy and openness of Leaver groups. And those involved in leaver groups can learn from trade unionists about working together for a common purpose. The challenge is to relearn our understanding of democracy.

No Russian interference in Leave vote
This year's Durham Gala – much to celebrate
Looking forward to Durham Miners Gala
Fancy That - Brexit Bloomers: No. 1
After the referendum, what now?