Leavers are doing it for themselves 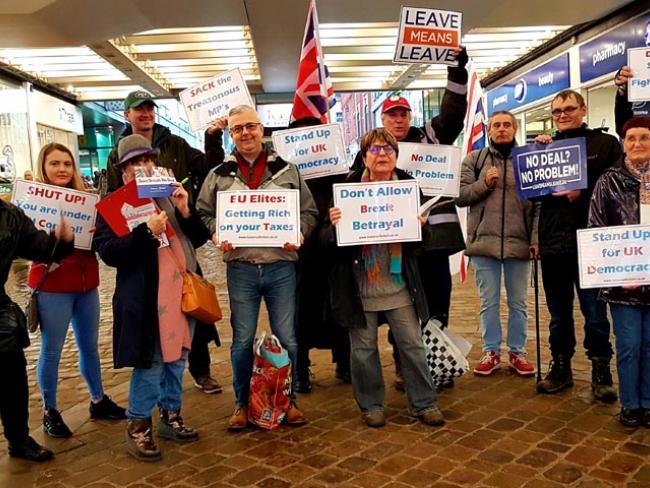 Leavers of Britain taking the Brexit message to a shopping centre in Manchester.

Something is stirring in Britain. Away from parliament and the parliamentary parties, people are starting to organise to defend Brexit.

In a key development, a truly national grassroots organisation has been created, with groups ranging from Glasgow to Bath, from York to the New Forest: Leavers of Britain. As an organisation with just one aim – Brexit – it has catalysed the formation of local groups that involve people from right across the political spectrum.

After the referendum frustration and dismay mounted as Leave voters saw Remain groups and campaigns receiving funding and gaining a lot of press coverage, while little seemed to be happening on the Leave side. Leave Means Leave was launched, but with little or no structure or encouragement for local organisation.

Yet beneath the surface, things were happening. In fact, some things never stopped. While the official campaigns disbanded after the referendum, some local groups kept going. In Brighton, for example, a group calling themselves the “Jolly Brexiteers” was one of those not to disband after the referendum. It carried right on, aware that the job had not yet been done.

Then, in 2017, Lucy Harris launched Leavers of London, aiming to bring together Leave voters in the capital and showcase the “positive people and arguments” behind the Leave vote in London. The format was simple: people got together in pubs and talked about leaving the EU.

And it worked. Last year saw the launch of Leavers of Britain. Lucy’s ingeniously simple idea was that anyone could join and advertise a local event for Leavers, wanting to see a clean Brexit. Joan in Manchester jumped at the chance and organised a meet-up in a pub.

Fifteen people turned up, from across the political spectrum. They were strangers with one thing in common – they’d voted Leave and were angry that politicians were seeking to block Brexit. At that first meeting they quickly decided that they wanted to be active, rather than just meet socially.

They’ve met regularly since, made placards, set up Facebook and Twitter accounts, leafleted in the streets, been interviewed on national radio and appeared in a Financial Times article. Two spin-off groups have been formed – Leavers of Trafford and Leavers of Bolton. People are excited to be talking to one another about Brexit, the opportunities ahead and how to make sure Britain leaves the EU in spite of the government and parliament.

Meanwhile Peter in Leeds heard what was happening across the Pennines and set up a Leavers of Leeds Facebook group and Twitter account. Membership and followers grew rapidly and Leeds had a successful first meeting in February with over 60 people attending.

Soon after, Sky News invited members to take part in a nationally televised debate. They spoke eloquently and passionately – and clips from the programme have been shared on social media. Leavers of Kirklees and Leavers of Bradford have been set up.

Sally’s group has kept its name, linked up with Leavers of Britain and has had a stall in the centre of Warrington now for 10 consecutive weeks. They’ve helped launch similar groups for Wigan and for Leigh. Their energy is infectious.

This organic network has been spreading across the country – Bristol, Dorset, Glasgow, Cardiff, York and others. A Leavers of Northern Ireland group is planned too. We are also seeing industry groups – Fishing for Leave is the gold standard, but there is also Artists4Brexit and Students4Brexit, as well as the influential Lawyers for Britain and Veterans for Britain. What all these bodies have in common is that they are non-sectarian.

There is talk of having banners at the March To Leave rally in Parliament Square on 29 March. That should be a good event – whatever Parliament gets up to between now and then.