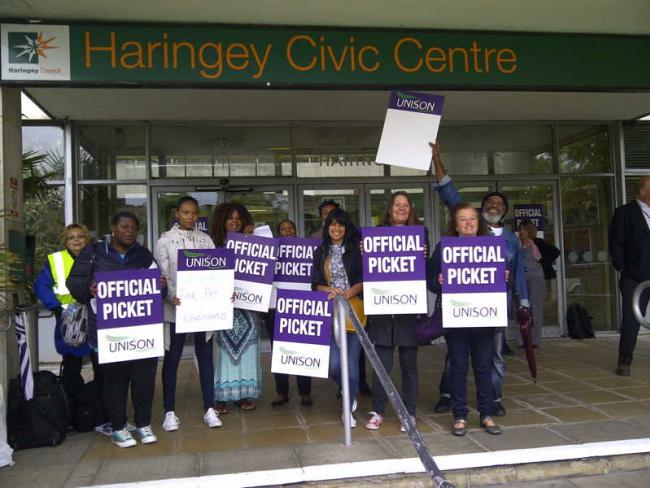 11 June 2014: workers in Haringey, north London, during the dispute over pay.

It is unprecedented for the Industrial Action Committee to refer back a request from the local government National Joint Council and Local Government Service Group Executive. What is a reality check in Unison terms? It must surely be to have had a 10.9 per cent return on the consultation ballot, with only 7 per cent of the membership actually voting to reject the offer and take industrial action!

The government’s Trade Union Bill will require ballot thresholds of 50 per cent for industrial action, which Unison knows it won’t achieve. So a further round of consultation with members will take place because no one has the courage to recognise that 10.9 per cent participation means that your army has either deserted and gone home or is in hiding.

The GMB’s 100,000 members in local government voted by 9 to 1 to accept the employers’ two-year deal, which is heavily weighted towards the lower paid. Unite, with 30,000 members, has voted for selective action but only if linked to Unison’s all-out action.

The employers’ offer is a complex attempt to get out of the trap they will be in with the new national minimum wage – some pay grades are now lower than the minimum wage. The government wants to drive wages down – and the trade unions are in a state of paralysis.

“The various “living wages” have effectively set a ceiling on wage claims.’

The strategy of tying the pay claim to the various “living wages” has effectively set a ceiling on wage claims. Local government pay is now the lowest within the public sector. Continuing wage freezes, reduction in local government funding, and the subsequent cuts in services and jobs, have left both employers and trade unions in a state of limbo.

On top of this, the proposed academisation of all schools will remove tens of thousands of workers from local government pay negotiations. National pay bargaining for teaching and non-teaching staff will then be threatened.

Will the National Joint Council agreement survive? Will the “Green Book” (covering the single status agreement) see more and more employers split away, either individually or on a devolved basis, not only in Scotland and Wales but in the English regions and cities?

Workers has continually stressed that the strategy and tactics must change – because the industrial landscape has changed. With unprecedented outsourcing of services and private sector penetration of the public sector, we cannot pretend we are in the same era.

With fragmentation of employment, with greater churn around contract provision and with engineered uncertainty over jobs, we need to think through new strategies. A first step would be to recognise the shattered employment scene and start organising accordingly.