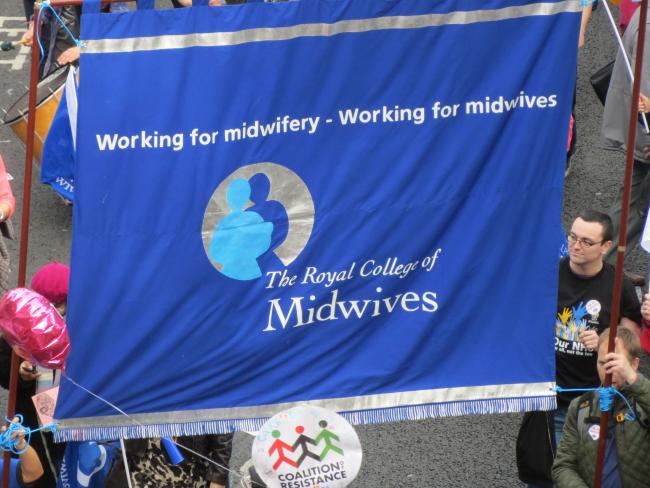 Midwifery services are defended by midwives. RCM carrying the message on a TUC march in October 2012. Photo Workers.

On 5 May Aneurin Bevan University Health Board highlighted an International Day of the Midwife on its main Facebook page. But a few days later on 9 May they announced, again by Facebook, that the Midwifery-Led Birth Units at the Royal Gwent Hospital in Newport and Nevill Hall Hospital in Abergavenny were to close until October.

In addition, the Birthing Unit at Ysbyty Ystrad Fawr in Ystrad Mynach will be fully staffed for only part of the day.

The board’s website has this statement about its maternity services, “we are committed to providing you with kind, skilled and compassionate care. We believe strongly that women should be able to make fully informed choices around their maternity care, and we want to support you in the choices you make.”

This won’t help expectant mothers and their families living near the Royal Gwent or Nevill Hall hospitals between now and October.

A “current staffing shortage” is blamed and the statement says “We apologise for the inconvenience caused”! The announcement also states that the decision was made “with the best interests of our mums and new babies in mind”.

This is not the first time recently that midwifery services in the area have been closed. Last October the temporary suspension was blamed on the high number of births, as well as staff shortages. And there was a further short suspension this January.

This time they are claiming there are only a few births in the area as the number of births at Nevill Hall and Royal Gwent were 20 and 24 respectively over the past 12 months. It may be that the earlier closures and suspensions had something to do with those figures.

‘Unions have warned about the gap between announcements and reality.’

And the RCM has been highlighting the dangers to mothers and babies from low staffing levels in Scotland. But that’s not the only part of Britain similarly affected.

Unison members were out protesting against the latest announcement. They and others took up the fight for decent maternity provision in 2015; it looks as if they’ll have to do so again.