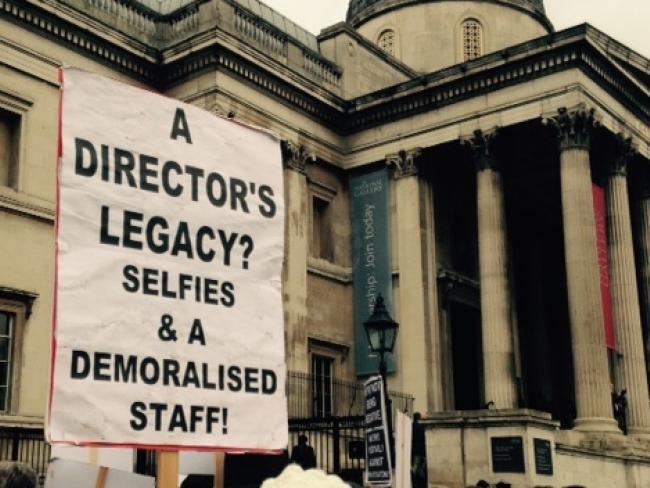 Workers at the National Gallery are currently resisting privatisation, fearing not only a threat to their jobs, but also to the integrity of a great cultural asset and the public’s enjoyment of it. A new director of the National Gallery is due to take up post later this month – but he or she is expected to implement the policies of the outgoing director, Nicholas Penny, by outsourcing staff jobs to an outside security firm.

Work in the Sainsbury Wing of the gallery has already been handed over to CIS, which formerly advised G4S. Gallery staff were on strike against the proposals for five days from 3 February, mounting pickets every day.

On 5 February members of the PCS union assembled outside the gallery in Trafalgar Square with supporters from other galleries and libraries. The gallery trustees chaired by Sir Mark Getty (of Getty Images) were holding a board meeting inside. The striking workers marched to the Sainsbury Wing to present the Board with a petition signed by over 40,000 people. The march continued to the Department of Culture Media and Sport in Whitehall to hand in a second petition.

Addressing the marchers, PCS Assistant General Secretary Chris Baugh said that the 94 per cent vote for the strike on a 62 per cent turnout was unprecedented in the museums and galleries sector. This was a response to the backward attitude of management, who refused to negotiate with its workforce and then made a legal challenge to an earlier ballot. The management claim that bringing in a private firm willing to work to flexible rosters can provide increased access to the gallery and its collection.

PCS believes that the existing staff are capable of achieving this without the necessity to privatise jobs, but they have not been given the chance to demonstrate that. What is more, gallery workers care about the paintings and the people coming to see them. Security firms are trained only to guard empty buildings, and have been told not to talk to visitors about the paintings.

The dispute has gone to ACAS, but the lead union negotiator has been suspended, allegedly for passing on commercially sensitive information. This is an instance of blatant targeting, but victimisation must not be allowed to become the story. The real fight is for the nation's arts and culture, public services and pay.

Action will continue with a lobby at the House of Commons on Tuesday 10 February supported by other unions of the Southern and Eastern Region of the TUC. Over 50 MPs have signed an Early Day Motion in support.

The dispute at the National Gallery has spotlighted various aspects of running museums and galleries and raised questions in the public mind. The previous director was credited with success measured in visitor numbers (over 6 million in 2013). But at what cost?

There is an ongoing debate about dumbing down for the sake of courting popularity and profit. This is epitomised by the recent decision to allow photography, encouraging the distracting modern trend of taking “selfies” in front of iconic paintings. In the aftermath of the Second World War, gallery warders were fierce military men in uniform. They would have been horrified at such disrespect.

As time has passed the atmosphere has become more relaxed and user-friendly. But today's more informal and knowledgeable staff are now seen as a threat and an obstacle to profit. Management prefer to dismantle the workforce instead of building the cooperation required to take a great institution into the future.