NHS recruitment: self-sufficiency is the answer 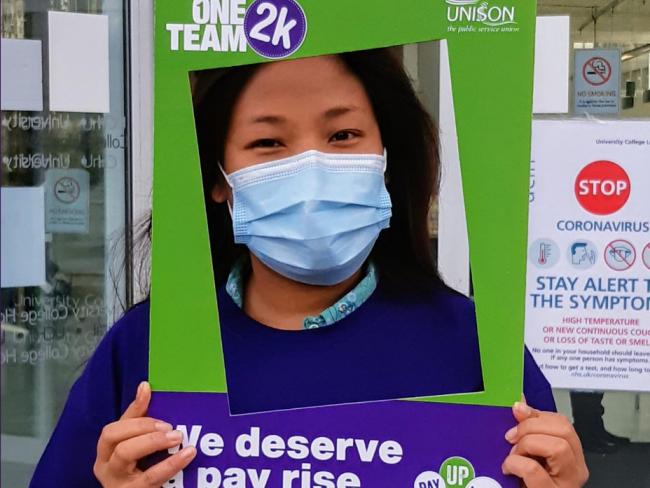 Unison staff at UCLH hospital, London, are part of the campaign for a minimum £2,000 pay rise. Pay is fundamental to retaining and recruiting nurses trained here in Britain. Photo Unison.

Health services have relied on imported workers for too long. It is unethical and in the long term unproductive. Challenging international recruitment would be a first step towards workers taking responsibility for the future of the NHS.

On 25 September NHS England wrote to Directors of Nursing and Regional Chief Nurses with details of international recruitment. The letter described, “…the extensive package of measures to support you with your nursing international recruitment (IR) with details on how you can apply for funding.” Our collective response and a concrete manifestation of taking responsibility should be “no, no and no”.

When the Health Services Journal published the NHS England letter on their website an online comment from a reader succinctly expressed all three points in one, “…(it) proves that the NHS leadership hasn't yet got over the fact that the era of colonialism has long ended. Try attracting your home grown by improving the working conditions and you might have stumbled across the solution for your perennial staff shortage. It’s not rocket science.”

There is a global shortage of six million nurses, predicted by the World Health Organization (WHO) to rise to nine million by the end of the decade. Governments of wealthy countries have routinely recruited nurses from overseas to fill the gaps.

The International Council of Nurses (ICN) represents 130 nursing associations from around the world. Writing in Nursing Standard, journal of the Royal College of Nursing, Howard Catton ICN chief executive called for ethical recruitment. He said, “One answer to the nursing shortages around the world is for each country to retain the nurses it has by showing how much they are valued: pay is fundamental”. One answer? Surely it is the answer.

The NHS leadership still harks back to past practices. A new NHS pan-London consortium for international recruitment was launched recently. And Prerena Issar, NHS Chief People Officer, said at the NHS Providers conference on 8 October, “International nurses are starting to return to UK…with 6,500 ‘waiting to start’”.

'All countries should focus on domestically educated nurses.'

As Issar’s background is in working for the United Nations and international firms like Unilever, you might excuse the lack of focus on Britain’s needs. But even the WHO knows that a domestic focus is the right course. Its Global Code of Practice on the International Recruitment of Health Personnel says the goal for all countries should be to have a sustainable national nursing workforce that focuses on a stable core of domestically educated nurses.

The ICN’s recent report Covid-19 and The International Supply of Nurses made the point that long-term reliance on inward international inflow of nurses is “the antithesis of self-sufficiency”. Such reliance is a likely marker of a country that is not investing sufficient funding and effort in training adequate numbers of nurses to meet its own demands. The report recommends that all countries use the ICN self-sufficiency indicator system which highlights a country’s dependence and vulnerability to overseas recruitment.

Part of the reason Britain currently scores so poorly on the self-sufficiency indicator is the reliance in recent decades on EU free movement of people. That contributed to the reduction in the number of UK students from 2010. Clearly there are officials in NHS England who are content to make the same mistake, with an emphasis this time on non-EU staff.

The ethical dilemma created by our dependence on EU staff is still evident. For example Spain’s General Nursing Council reports a shortage of 125,000 nurses. Yet in January this year more than 5,500 Spanish nationals were working for the NHS, many of them as registered nurses. The Spanish nursing council and the Spanish unions are pleased that Brexit means more Spanish nurses returning.

One of the reasons that Spanish nurses came to Britain was for longer term contracts that weren’t available in Spain. Over two thirds of Spanish nurses are on temporary contracts – not much evidence of wonderful EU employment rights there. Rights in the workplace are protected by workers fighting for them – whether in Britain, Spain or anywhere else. And that is the key to retention of nursing staff worldwide.