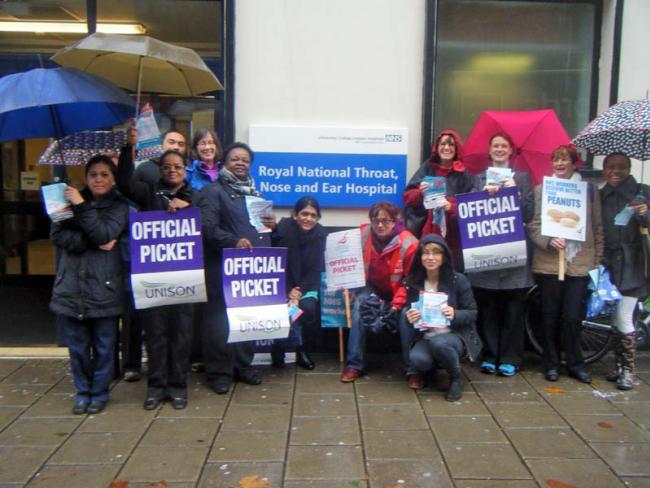 In the rain, but out in numbers: pickets at the Royal National Throat, Nose and Ear Hospital, London. Photo Workers.

It is a reflection of the discipline and loyalty of health workers to their unions that despite the low ballot turnout they struck and held out in the face of adversity. But reports reaching Workers from south London show a move towards reflecting hard on whether tactics short of strike action such as overtime bans, lunchtime protests, demonstrations, or selective strikes, or striking at different times of the day, can more effectively build a head of steam around pay.

Workers at Princess Royal University Hospital in Bromley south London maintained a lively picket line during the 13 October strike despite the rain. Picket numbers varied between 15 and 25 during the four-hour stoppage, mainly comprising Unison and RCM members with the occasional GMB member and no Unite.

Public support was amazing, with cars and buses sounding their horns in support, despite Bromley’s image as a Tory fiefdom. Sadly the numbers voting in the ballot reflected those actively participating in the strike. Yet union banners were unfurled, and veterans who had participated in the last NHS strikes in 1982 were joined by new workers who hadn’t even been born then.

Getting the experience of having organised and been on strike was good. It is another question as to whether a further strike will be delivered without much work to build the awareness and consciousness of health workers. But the campaign to “take your break” was supported during the rest of the week.

Stalwarts at Lewisham Hospital heroically faced four hours of torrential rain to ensure the picket line was staffed in support of the strike.

Yet truth be told, there was minuscule support from hospital workers. On more than one occasion the picket was swamped by professional well-wishers, advisers on industrial action more used to their armchairs and various other odds-and-ends organisations. Unison and Royal College of Midwives strikers had to reclaim the picket for its real purpose – a strike on pay – as opposed to those who just wanted to swop each other’s soggy newspapers.