Skip to main content
Home » News/Views » The NHS: unsafe in their hands

The NHS: unsafe in their hands 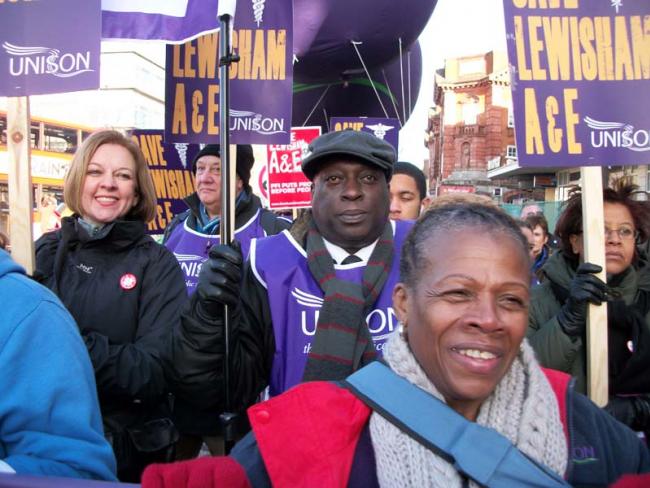 Demonstration during the fight to save Lewisham Hospital, south London, February 2012.

At the Conservative Party Conference Prime Minister David Cameron declared his commitment to the National Health Service saying that no one could believe he would put other people’s children at risk. The truth is that he and his class are doing just that to the NHS.

Soon after that speech a letter in The Independent from senior doctors, nurses and midwives described the NHS as buckling to the extent that its founding principles are at stake. They described how hospitals are at breaking point and that the funding restraints under the coalition are unprecedented in the 66-year history of the NHS. There is a projected funding shortfall of £30 billion by 2020.

Elective surgery and cancer targets are being missed. For example in the north of England, the waiting time for elective orthopaedic surgery is now three months on average, compared to just over four weeks in 2010. In some parts of the country the 18-week cancer waiting time target, which was almost universally met in 2010, can now be as long as 30 weeks.

Cameron lost his son Ivan early in his tenure; a devastating blow for any family. He paid tribute to the NHS for its support and cited this as evidence of his commitment to the service. It is one thing for a multimillionaire to deal with the consequences of having a severely disabled child and quite another for someone living without his privileges, in a small house or flat on average wages. In 2014 to parents who find themselves in that predicament would not share the prime minister’s experience of health, social care and respite services.

‘Since 2010 there has effectively been no national centralised workforce planning.’

There is no effective integration in Britain between hospital and social care. For the most part social care is privatised. In some areas of the country it is not available at all from a provider capable of meeting Care Quality Commission standards.

The 2010 Conservative Party manifesto gave an unequivocal commitment that there would be no further “top-down” re-organisation of the NHS. Yet we got the Health and Social Care Act 2012 a massive top-down reorganisation which further opened the service up to the private sector.

Under pressure from health service unions and the rest of our class, annual spending on the NHS the Labour government had increased spending (though also, for example, had introduced clinical commissioning groups). Britain reached the rank of third in the OECD league table of per capita spending on health behind only Germany and France. We have now slipped to 11th.

In Scotland the Health and Social Care Act has not been implemented. Nursing care in the community is free of charge and properly integrated with hospital, residential and respite services. There are no prescription charges and no tuition fees – enabling medical and nursing education to be properly planned.

The NHS has been nominally protected from expenditure cuts, but the revenue uplifts take no account of inflation or the cost pressure from an ageing population. Yet the service has undergone a cost-improvement programme (QIPP) which achieved an underspend of around £2.5 billion in 2013-14. It’s not evident that any of this has been returned to the service. Capital investment and expenditure on modernisation is lower in 2013-14 than it was in 2009-10.

The lives of NHS workers have been directly attacked too. Since 2010 pay has either been frozen or at best has risen at 1 per cent below inflation: a cumulative pay cut of around 6 per cent. The final salary pension scheme, defined as deferred wages when setting it up in 1948, has been wound up. Pension contributions have significantly increased, disproportionate to any demographic pressure. The average hospital consultant is paying £1,400 a month into a pension scheme predicted to be in surplus by around £2.5 billion in 2018. This represents a significant and unprecedented attack on the material and social wages of those who deliver care to our people.

Cameron and his health secretary James Hunt are proud of what they’ve done. Hunt claims that there are 6,500 more doctors, 3,500 more nurses and 3,000 more midwives in the NHS since his government came to power. It’s not possible to validate these by reference to the relevant professional registers. Midwives claim that Hunt has reneged on his promise to expand the profession. No doubt that was one element behind their decision to strike for the first time on 13 October.

For GPs in particular there is an impending manpower crisis due to an ageing professional population and loss of posts. Any proposal to expand their numbers just marginally will inevitably result in a diminishing number of qualified doctors working as GPs, exhorted beyond their capacity and competence to deliver a primary care-led NHS.

Since 2010 there has effectively been no national centralised workforce planning. Cameron claims that there are 5,000 more GPs in the pipeline and a further 8,000 will be recruited by 2020. But it takes eight years to train a GP – five years in medical school, then house officer rotation followed by practical accreditation and training. Even if a planned medical school expansion was implemented in 2015 the necessary number of qualified doctors would not be available until 2022 at the earliest.

Cameron promised 7-day access to a named GP by 2020 and claims to have set aside £400 million for the purpose. That is undeliverable without a significant expansion of GPs and associated professional and health and social care staff. None of that has been either scoped or costed. Perhaps he’s hoping no-one will remember the pledge.

As usual in the run-up to a general election, political parties spray promises around like confetti. Labour is pledging to repeal the Health and Social Care Act. Believe it when you see it – that’s the same Labour that pledged in 1997 to put an end to the internal market in the NHS.

The risk is that by the end of the next parliament the NHS and national integrated health care will be consigned to the past. Only our class can reverse that, without trusting any parliamentary party.