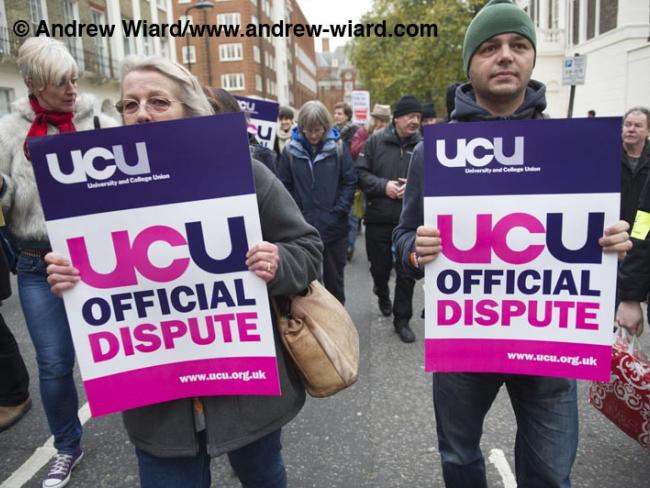 UCU members marching in London during their 2013 pay dispute. The fight is now on again in earnest. Photo Andrew Wiard/www.andrew-wiard.com

Teaching staff in Britain’s universities are ramping up their fight for pay. With the autumn term beginning, they could be joined by administrative staff…

In all the post Brexit furore in higher education, the vice chancellors’ main tactic has been to “forget” that they are in the middle of a pay dispute with their staff. Prior to the referendum in June academic staff in the University and College Union (UCU) took two days of national strike action. Since the referendum UCU members across the country have taken a further day of action, with local branches choosing the strike day for maximum local impact.

Now a clear majority of Unison members working in universities (including administrative and professional staff such as librarians) have rejected the pay offer in their consultation. The union’s Higher Education Service Group Executive decided to ballot members in September and call on them to take escalating industrial action in the autumn. In announcing the ballot Unison pointed out that it expects the employers “to use the uncertainty caused by the EU referendum decision as another excuse to avoid a decent pay award.”

So as the new term begins the challenge will be for all union members to keep focused on the real issues and not be drawn into an agenda set by vice chancellors.

There is no talk of having to reduce vice chancellors’ ever-rising pay as a result of “Brexit uncertainty”, so that excuse cannot be allowed in relation to staff pay either. But the uncertainty factor is bound to be an employer argument for not improving on the 1.1 per cent offer – they call it an improved offer because they added 0.1 per cent to their original insulting 1 per cent offer!

‘University income is not reaching staff.’

When the UCU and the Educational Institute of Scotland (EIS) submitted the national pay claim for a 5 per cent pay rise earlier in the year they pointed out that the background was a huge drop in value in the pay of academic staff since 2009 – a fall of 14.5 per cent compared with rises in the Retail Price Index. So if EU membership was such a boon to universities, how come those benefits never reached the staff?

Even more telling is that during the same period the proportion of university expenditure spent on staff salaries has declined, with money instead being invested in buildings or contributing to surpluses in some institutions. In June an EIS report showed that the Scottish university sector generated a record operating surplus in 2014-15 with closing reserves of over £3 billion!

So whatever the student fee regime in different parts of Britain, it is clear that university income is not reaching the staff who are teaching those students. For administrative and professional staff having to decide on action in September, Unison has quantified their reduction in pay at between £1,585 and £8,428 since 2009 in real terms, as pay “rises” were consistently below the rise in the cost of living.

Unison members in universities now undertake an ever-growing range of complex roles which make the difference between a university being “open” or “closed”. All students now access the majority of their learning materials online and all taught classes are supported by the Virtual Learning Environment (VLE), with its related electronic reading materials supplied and maintained by staff such as university librarians and e-learning support staff.

To date the most important weapon of a marking boycott has not been used. That will change this autumn when UCU and EIS members bring it into the fight for the first time. In combination with the resignation of external examiners, the boycott could make a big impact on assessment processes.

Rather than meekly accept the employers’ assertions about the negative effects of Brexit, trade unions need to ask the critical questions.

Currently 5 per cent of UK students are from the EU and their impact on our Higher Education system can be debated. On the one hand the Institute for Social and Economic Research argues for the positive impact within our universities of EU students: “EU undergraduates, in particular, are very high performers, and are more likely to obtain a first [class degree], less likely to be unemployed, and earn higher salaries, on average, than their UK domiciled peers.”

‘A marking boycott has not been used. That will change.’

Yet the Student Loan Company reported in May 2016 that non-payment of student loans by EU students is now costing UK taxpayers £89 million a year, up from £25 million in 2010. As these non-payments do not yet reflect EU students who have had the £9,000 loans, the figures are set for a large jump.

In fact, the reclassification of EU students as “international” students may be a financial benefit to universities and although numbers may decrease, income may rise!

Trade unionists including those in the National Union of Students need to re-focus this debate on the real role of a university and how a university can meet the collective need of the population (see “What is a University for?”, Workers, June/July 2016). The employers have shown remarkable consistency over the past ten years in creating more senior managers, paying vice chancellors large salaries and building up huge reserves. Simultaneously students have been plunged into greater and greater debt and staff have been paid less and less.

It is also a fact that 15 per cent of UK university academics are from the EU. A number of these are involved in specific EU funded roles such as “Jean Monnet Chairs” – posts for university professors, as they are described, “to deepen teaching in EU Studies...mentor the young generation of researchers in EU Studies...and organise activities…targeting to policymakers local, regional, national.” Or they could be called part of the EU propaganda machine.

Most, though, will be here because of genuine international collaboration and, as for other EU citizens who were here before 23 June, there will need to be a transition plan. It is already evident that work is being undertaken on that plan.

In August Chancellor of the Exchequer Phillip Hammond said that where UK organisations bid directly to Brussels on a competitive basis for funding projects while we still belong to the EU, for example universities participating in the big EU research programme Horizon 2020, the Treasury will underwrite payment of such awards, even when specific projects continue beyond the UK’s departure from the EU.