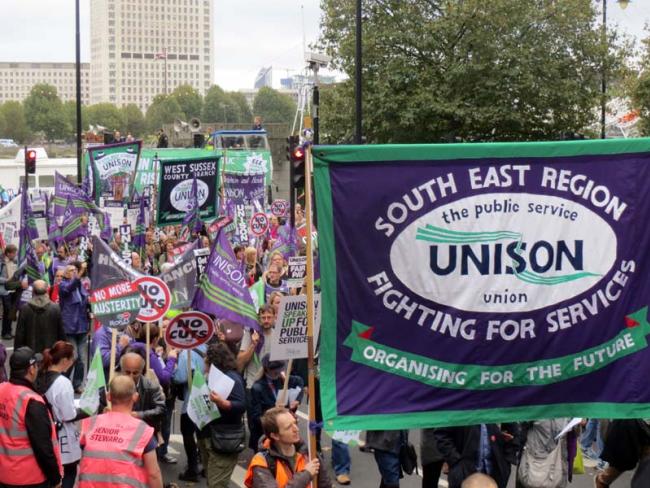 The local government workers’ pay “dispute” is now concluding a period of consultation, set to end on 12 November, on the employers’ changed pay proposals, not yet an offer but likely to be confirmed as such when the employers get their act together.

To date the pay negotiations affecting in the region of 1.5 million workers have reflected a bad farce, set in Ruritania, with chorus cries of the best from British pantomime overseen by that strategist the Grand Old Duke of York.

An initial 14 per cent pay claim has been effectively reduced to a mere £1 an hour tied to the so-called living wage. There has been no engagement with the employers after they rejected the initial claim. Unison’s democratic structure and pay strategy, if one can call it a strategy, kicked into operation with a national strike ballot.

The turnout was in the region of 15 per cent, with a slender majority voting yes. Unison refused to publish the turn-out figure. The employer said it was 6 per cent aggregated across the unions balloting – a figure never contradicted by the unions involved.

‘Local government workers now have to think through how they got themselves into such a tactical dead-end.’

Ignoring the turnout Unison’s allegedly lay-led democracy clamoured for strike action. The GMB and Unite as minority players in local government followed in Unison’s slipstream. A national strike on 10 July 2014 was widely acknowledged as a fiasco by all except the ultra-left.

In many areas brilliant application of “smoke and mirrors” by union organisers made the strike appear more successful than it was. Flags and banners masked members crossing picket lines. But teachers in the NUT were also on strike, closing myriad schools and hiding the ineffectiveness of the action in town halls and local government functions, which continued without major disruption.

Unison then announced two further strike days for September, which led to a fundamental split between Unison, the GMB and Unite. The two days were withdrawn and a united position of a further strike on 14 October was announced. Then the negotiators started talking. There was effectively no real change around the “proposal” (not a formal offer) of around 1 per cent.

The date for payment slipped, which meant it could be interpreted as a 2 per cent offer or more if a settlement date of 1 January 2015 is applied, as opposed to the original February 2014 claim date. So consultation over the proposal got under way with union members having to get their heads round various strategies. Consultation, to the fury of the ultra-left, led to the deferral of the 14 October strike day.

Local government workers now have to consider accepting the offer and going away to think through how they got themselves into such a tactical dead-end. Rejection means a commitment to all-out industrial action, which is a non-starter as the unions couldn’t even deliver a one-day stoppage. Instead, workers have to think through how sections of the three largest unions, by not having genuine member participation, have allowed themselves to be locked into such a mess.

It’s a car crash, hijacked by the ultra left who delight in trying to worsen it, splinter the trade unions and promote yet again more so-called rank-and-file red trade unionism. It is no accident that in Unison they are clamouring for the election date for the general secretary’s post to be set in 2015, so that the hat of their favoured armchair general of this flop can be thrown into the ring.

The three major local government unions, Unison, GMB and Unite, have painted themselves into a corner. Rhetoric has replaced thinking, mechanistic tactics have replaced strategy. The foundations of the pay strategy have been built on sand.

The need now is to retreat, regroup and preserve the ability of the unions to function rather than be destroyed by gesture tactics and posturing. Unison must take responsibility for this failure of strategy, but must be applauded for showing real leadership in trying to extract the local government unions from the quagmire they are floundering in.