Skip to main content
Home » News/Views » Paying for the Crusades

Paying for the Crusades 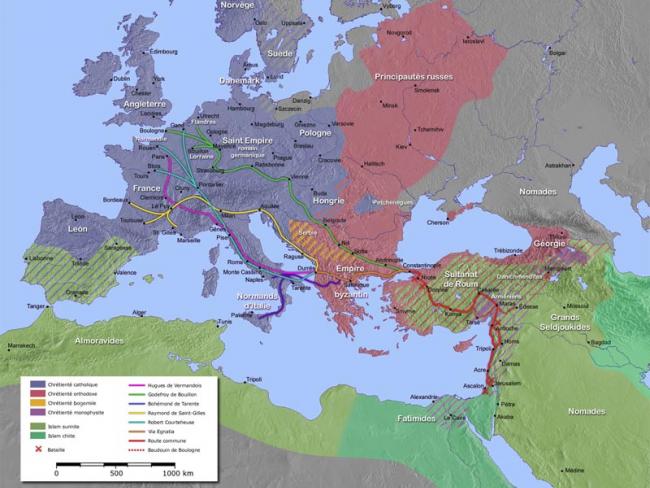 A map – in French – of the First Crusade. Photo Captain Blood/de.wikipedia

As we await the long-delayed publication of Chilcot’s inquiry into the Iraq War, here’s a reminder of the costs of medieval invasions of the Middle East…

Thinking about the enormous cost of the Iraq war to Britain’s workers, it is interesting to look back at how the cost of the Crusades led to sustained and effective opposition. It actually contributed to the defeat of the papal system, which was using the wars in an attempt to gain universal dominion over all nations and all classes at that time.

The First Crusade was started in 1095 by Pope Urban II on a wave of religious hysteria after the Byzantine Emperor pleaded for help to free the “Christian” lands of Syria and Palestine from the Muslims living there. Later crusades relied less on voluntary donation and more on extortion – and Henry II’s tithe for the crusades laid the foundations for income tax.

Ralph Niger, the historian and theologian, warned that God would not favour a crusade financed by the spoliation of the poor. Henry later exiled him for his efforts. Many of the clergy preached the crusades but refused to be taxed for them. The church exploited crusader-vow redemptions, whereby you could buy back your promise to crusade.

In Scotland, opposition to the tithe made it impossible to collect. The government therefore, more sensible than Thatcher’s in handling her poll tax, withdrew it. In 1222, Henry III authorised a compulsory poll tax for the crusade. Opposition was so strong that he had to change it into a voluntary tax. The papacy also taxed England more than anywhere else, levying crusade taxes every six years in the 13th century.

The stated aim of the First Crusade was to take Jerusalem, which the Count of Blois predicted could be done in five weeks. Two years later they finally reached the Holy City, and sacked it. All the Muslims and Jews of the city – men, women and children – were killed, 70,000 altogether. The Jews fled to the chief synagogue: it was burned and them with it.

Jerusalem’s capture and sacking marked the zenith of crusading, followed by a long decline, of bloodletting and disaster. Its capture was to the Arabs conclusive proof of the bloodthirsty fanaticism of the invading Christians: if the Arabs were to survive, the Christians had to be driven out and sent back to their own lands.

‘During the Fourth Crusade the crusaders attacked their ally, the Byzantine empire and sacked their capital, Constantinople.’

During the Fourth Crusade, 1201-4, the crusaders attacked their ally, the Byzantine Empire, and sacked its capital Constantinople. This outrageous action, which Steven Runciman in his three-volume study A History of the Crusades called one of the greatest of all crimes against humanity, showed how completely the crusades had become campaigns of pillage not pilgrimage.

A contemporary wrote of the wealth of Constantinople: “No one could imagine its amount or value. It included gold and silver, table services and precious stones, samite and silk, mantles of squirrel fur, ermine and miniver. So much booty had never been gained in any city since the creation of the world.” The slaughter and destruction weakened the Empire, a bulwark against Islam, and so strengthened the crusaders’ enemy. In 1262 the Greeks retook the city from its Christian defilers.

The crusading spirit was also cynically invoked against the pope's enemies in Europe, leading to massacres of the Albigensians, the Beziers and Cathars, for example. In Britain it led to massacres in London and York.

The Ninth Crusade, 1365-66, was launched against Egypt, which had been at peace for the previous fifty years. It ended in the holocaust of Alexandria. Runciman summed up: “The Crusades were launched to save Eastern Christendom from the Moslems. When they ended the whole of Eastern Christendom was under Moslem rule.” By 1291 the crusaders had been expelled from Syria and Palestine. “The whole crusading movement was a vast fiasco.”

The papacy, which had initiated this movement at the height of its powers, had been defeated too. Saving the Holy Land had been one of its greatest ambitions, part of the pope’s claim to universal dominion. But by the late 13th century the crusading movement, offspring of the papal theocratic movement, had been defeated. The Arab defeat of the crusades assisted the defeat of the papacy.

Popular opposition in Europe, especially in Britain, also helped to defeat the Papacy and its crusading warmongering. In 1187-9 Anglo-French theologian Ralph Niger opposed the crusade, saying against the pope’s “Deus vult” (God wishes it) that “Deus non vult”. More than a hint there of an attack on papal authority! The Lollards spoke up for peace. In 1268 Roger Bacon wrote against crusading, as did the poets Langland and John Gower a century later. Wycliffe did also, and criticised those who used the Old Testament to justify wars.

As late as the 14th century princes and nobles were still eager to crusade, but other classes — merchants, peasants — opposed them. It became too difficult to finance these expeditions in view of popular resistance to the waste involved. Henry IV, as recounted by Shakespeare, was unable to bring off his own crusade and had to make do with dying in a room called “Jerusalem”.

The brawling nobles of England and Germany, full of greed, cruelty, hatred and vicious self-righteousness had, like the Pied Piper of Hamelin, led the Crusades to oblivion.