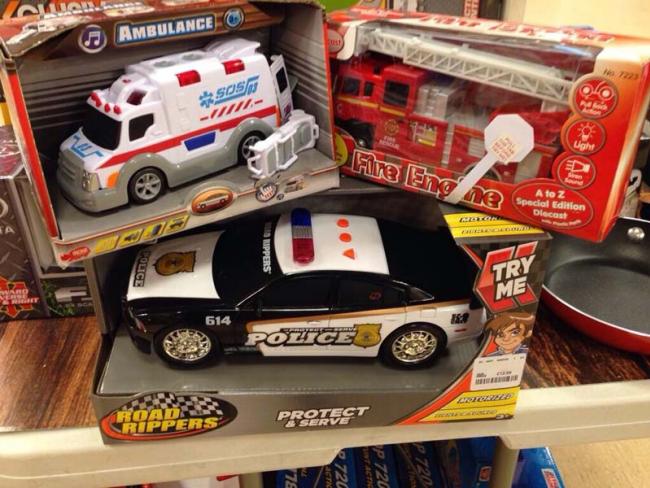 The emergency services are not the government’s toys. Photo Workers

Last month Home Secretary Theresa May told the think tank Reform that the Emergency Services of England and Wales (Police, Fire and Ambulance) needed to be integrated to save money.

This is not the first time that the idea of lumping our emergency services together has arisen. Fire Service chiefs, when under pressure, periodically return to the idea that they could run Fire and Ambulance Services together.

London Mayor Boris Johnson has also jumped onto this particular bandwagon, following a recommendation of the 2011 London Assembly report into “The Future of the London Ambulance Service”. This said, “The Mayor should commission a review of shared facilities and joint working between the London Ambulance Service and the London Fire Brigade. The review should aim to generate efficiencies by making specific proposals for shared stations and control rooms.”

Unison and the Fire Brigades Union (the main unions involved) saw through this talk for what it really means: cuts, job losses and an attempt to dilute the standards set by the British 999 Services. Much of Britain already has shared facilities, including shared stations. Control rooms are linked to each other for more efficient working. But this is not what May or Johnson mean when they talk of “efficiencies”.

May went one step further in her speech to Reform. She spoke about a merger between all three emergency services. “With a still large deficit and a record stock of debt, there will need to be further spending cuts…so in policing in the future, I believe we will need to work towards the integration of all three emergency services.” This has serious implications. And the plan would be that the unpopular Police and Crime Commissioners (PCCs) would lead these mergers.

One PCC has already spoken of his vision for the future. Adam Simmonds (Northamptonshire) wants to see the possibility of just sending one emergency vehicle (incorporating police, fire and ambulance) to the scene of an accident equipped “for all eventualities”! This is Keystone Kops territory. It isn’t funny, though, as working people will bear the cost of these measures.

This simplistic talk of a one-stop shop for emergency services betrays a complete ignorance of the history, culture, training and complexities of each of the services. The British emergency services work well together on a daily basis. Day in and day out there is a professionalism and teamwork that can only continue if the 999 operators carry on asking the question: Police, Fire or Ambulance?