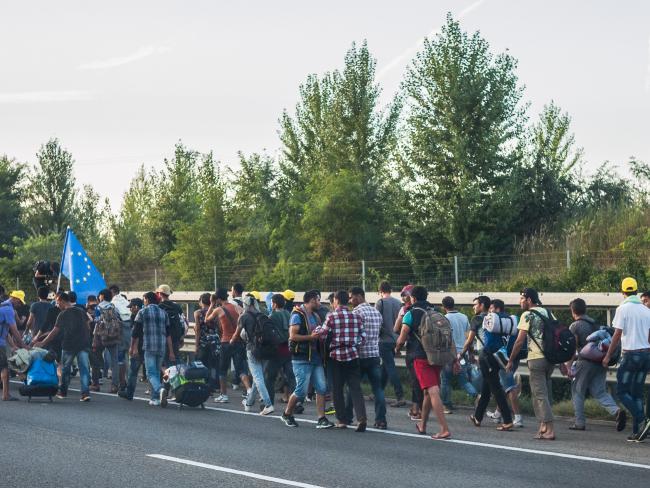 Refugees on the Hungarian M1 highway on their march towards the Austrian border 4 September 2015. Photo Joachim Seidler CC BY 2.0

Frank Furedi, Emeritus Professor of Sociology at the University of Kent, argues that despite the media’s attention on the supposed threat to democracy from populist movements, the anti-populist reaction is far worse. In this book he examines the EU's attitude to Hungary as one example.

A free and open debate about whether to leave the EU led to our majority democratic decision to back independence. Furedi notes that for the dwindling minority who want to overturn the vote, “European federalism symbolized a sacred cause, while nationalism was assigned the role of anti-Christ.”

As Furedi points out, “Anti-populism has constructed a culturally warped view of populism that casts a movement questioning the elite cultural consensus in a negative light.” That intolerant and reactionary viewpoint characterises populist movements as xenophobic, anti-democratic, and totalitarian.

European Commission President Juncker says “we have to fight nationalism” and “block the avenue of populism”. Pope Francis stated infallibly, “the example of populism in the European sense of the word is Germany in 1933.”

EU commissioner Margot Wallström said that nationalists caused the Second World War and that eurosceptics risked a “return to the Holocaust”. Herman van Rompuy, a past president of the EU Council, agreed; he said “Euroscepticism leads to war.” Euroscepticism was not to blame for the war on Libya for instance; rather it was the pro-EU governments of Britain and France.

The EU sees itself as the enlightened minority with a duty to impose its values on the benighted majority, just as the old empires did. It wants elite rule, not democracy. When Eastern Europe’s countries joined the EU, “The transition period was marked by...a fear of mass politics”, as Bulgarian political scientist Ivan Krastev wrote.

Now the EU is bullying Eastern Europe’s countries, after “introducing an economic shock therapy that led to the privatisation of the economy, mass unemployment, and the dismantling of the old Hungarian welfare state.”

Furedi comments that many of Hungary’s critics “come across as latter-day cultural imperialists who feel that they have the right to impose their values on Hungarian society and who have no inhibitions about lecturing Hungarians on how to live their lives. They do not seem to realize that the problems facing Hungarian society will only be resolved through the efforts of its people, not by foreign advocacy organizations meddling in the affairs of an independent sovereign nation.”

Robert Fisk in The Independent slanderously likened Hungary’s treatment of migrants to Nazis putting Jews on the trains to Auschwitz. Fisk then demonised the whole Hungarian people: “don’t think that Hungarians were unwilling tools of Germany’s march into Hungary towards the end of the war.” No doubt there will be more in the same vein after the Hungarian elections on 8 April.

The EU damned the Hungarian government for building fences on its border with Serbia and Croatia in autumn 2015, which significantly cut uncontrolled migration. It said nothing about Norway and the three EU Baltic states building fences on their borders with Russia.

'Mass politics has continually provoked the fear and hostility of the political establishment,'

Who opposes democracy? Furedi argues that some who back our staying in the EU are now drawing on Europe’s more regrettable, anti-democratic traditions. They oppose Europe’s other values, the Enlightenment values of democracy and freedom. As he observes, “Hostility towards the demos has at every stage accompanied the historical emergence of democracy. The rise of mass politics since the nineteenth century has continually provoked the fear and hostility of the political establishment.”

American journalist James Traub expressed this hostility to democracy writing in Foreign Policy magazine claimed that our vote to leave the EU was the product of “the mindless angry”. The article was entitled, “It’s Time for the Elites to Rise Up Against the Ignorant Masses”.

Nations are the necessary foundations of democracy. Furedi sums this up, “...borders, which are essential for the maintenance of national sovereignty, are so far the only foundation that humanity has discovered for the institutionalization of democratic accountability.

It is within familiar borders that citizens felt confident to work out their ideas and enter into dialogue and debate with one another. Without borders a citizen becomes subject to a power that cannot be held to account and this is why – from a democratic perspective – it is so important to counter the anti-populist crusade against national sovereignty.”

Furedi’s conclusion is, “The experience of history indicates that popular sovereignty and the values associated with its exercise is the most robust foundation on which public life can flourish.” He goes on to say that the principle of political legitimacy based on that sovereignty is “...constantly challenged by anti-populist opinion, which has no trust in the capacity of the people to make intelligent choices. Illiberal anti-populism constitutes the principal threat to democracy in Europe today.”

Populism and reaction
Populism: a force to reckon with