Put professional librarians back in charge 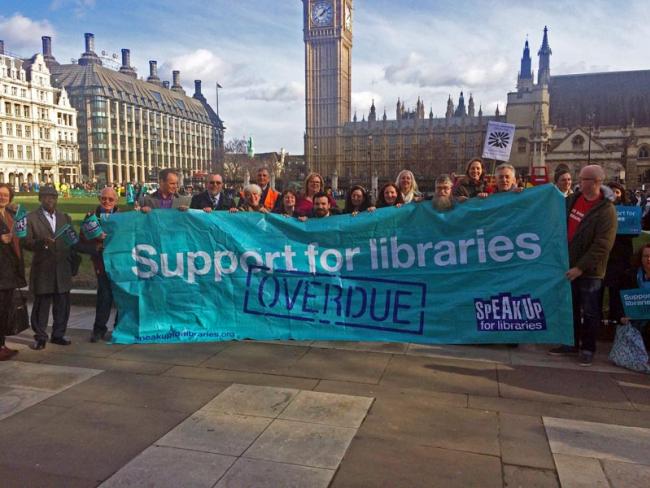 Protest in Westminster during a lobby of parliament, February 2016. Photo Workers.

Our libraries and librarians could contribute considerably to building an independent Britain. Are they up to the task?

It’s a grim time for public libraries. No fewer than 127 of them closed in the year to March 2018, according to CIPFA, the Chartered Institute of Public Finance and Accountability – on top of 332 which shut down between 2014 to 2017.

And those branch libraries remaining have had opening hours cut, professional and non-professional staff posts slashed, and many handed from council control to volunteer groups. That’s not just anecdotal: a website set up by a concerned librarian, www.publiclibrariesnews.com, has been recording cuts, closures and handovers to volunteers for nearly ten years.

Even the choice of books to stock in public libraries, previously decided by professional librarians, has often been outsourced to library suppliers who provide stock by the yard. The deleterious effects of this have helped the arguments advanced by the enemies of the public provision of information and knowledge: “It’s all on Amazon,” they say, or “Libraries are redundant in the internet age”, and so on.

Public libraries are the backbone of the British network of libraries, but the position is no better elsewhere in the library world. School libraries have been stripped of qualified staff, and are often handed over to teaching assistants to run.

Mergers and closures have taken their toll in university and college libraries. Many have abolished specialist posts, librarians with both professional skills and subject knowledge who would work with lecturers in a particular subject to make sure that library resources supported teaching.

Library functions in commercial organisations have often been targeted by the cost-cutters. The national library, the British Library, has not been immune, and government department libraries are in a parlous state, with many hived off to Arm’s Length Bodies.

In the face of this onslaught, it’s no surprise that librarian and library workers’ trade unions and professional organisations have not fared well. Those public library workers who are trade union members are generally in Unison, but poaching by other big general trade unions has occurred.

Trade union membership is low, far lower than it should be, and inter-union rivalries distract from the urgent task of bringing public library workers back into their unions, and making those unions serve the members once more, not factional interests.

Some of those who remain in union membership have lost their grip on reality and call for incessant, eternal strikes to stop library closures. This dangerous nonsense further weakens the already attenuated state of union organisation in libraries.

The professional body for librarians, the Chartered Institute for Librarians and Information Professionals (CILIP), formed from a merger of the Library Association and the Institute of Information Scientists in 2004, has seen a catastrophic decline in membership. This is due mainly to the loss of professional posts, chiefly in public libraries, historically the largest sector of membership. When the new body was created, it had around 25,000 members. It now has less than half that number.

The internal politics of the organisation are marked by a dogged refusal to think about the nature and tasks of a professional body in 21st-century Britain, instead preferring to chase every hare that crosses their path.

The latest fads to occupy the Library Association include “diversity”, in the name of which they seem hell-bent on removing the cornerstone of professional qualifications, graduate status; or “critical librarianship”, diverting librarians into arguments about whether books whose authors fail political correctness tests should be stocked; or “decolonising libraries”; or whichever new shiny thing is the flavour of the month.

Similarly the lead body for county and borough librarians, known as the Society of Chief Librarians for decades if not longer, fell victim to branding consultants and has renamed itself Libraries Connected. It now chases fads, rather than maintaining standards in the libraries that remain.

As for those who use libraries, at national level the Library Campaign has been in continued existence since 1984. At local level, library campaigns, have been formed and worked vigorously to defend their services. The best of these have understood that they are not just campaigning for a building containing books, but a place where the professional skills of librarians can help to solve problems for individuals and towns and cities.

Some have been diverted into accepting the poisoned chalice offered by canny local councils of campaigners running libraries themselves, as volunteers. About 500 of Britain’s 3,800 libraries are now volunteer-run, often separated from the wider network. Yet evidence suggests that volunteer-run libraries often fail. Initial enthusiasm among volunteers soon fades, they lack the commitment and skills of paid staff, and they are not bound, as members of CILIP are, by any ethical code. One long-standing project is that there should be a national, universal library card, but this is unachievable if volunteer-run branch libraries are removed from the national library system.

British public libraries led the world in free services for every man, woman and child’s education and recreation. Our national collections are world-renowned.

There’s professional expertise, and a wealth of experience. Librarians in a multitude of institutions led in the adoption of online services from the 1960s onwards, and were quick to pioneer the use of Internet technologies in the 1990s and beyond as new ways of serving their populations. Public librarians built the Peoples’ Network in 1997, to open up the Internet to ordinary people.

Interlending and other networks past librarians made could be revived and repurposed. Librarians in a number of sectors are starting to work with big data, and to understand the impact robotics and artificial intelligence will have – applying the traditional skills of the profession in new areas.

But where will the librarians of the future come from? Some have suggested compromising on the academic rigour of professional education by introducing “lite” paths into the profession, for example for allegedly disadvantaged groups. This does no one any favours, least of all the young people brought into the profession on a second-class pathway.

Once, libraries in London and provincial commercial and industrial centres ran services aimed at their business users. Many provided current awareness and abstracting services for their local users, as well as personalised reference and research services.

Nationally too, the Department of Trade and Industry offered, in Victoria Street in London, the Statistics and Market Intelligence Library (SMILL). Anyone could walk in off the street and consult a world-class collection of statistical and marketing intelligence material, including market research reports, which are notoriously expensive for individuals to buy – a fine example of the benefits of the collective provision of this sort of information. SMILL closed; around the same time, the abolition of the GLC, and with it its world-class research library, was another portent.

Information, data and knowledge are all fundamental to the economic foundation of a flourishing independent Britain, and librarians are the professionals who can organise and mobilise them. What services will our new and existing industries and technologies need? What will the expanded universities and colleges need from libraries and information resources to support students’ preparation for working in an independent economy? The library profession must start to think about these questions.