Rail: a test case for independence 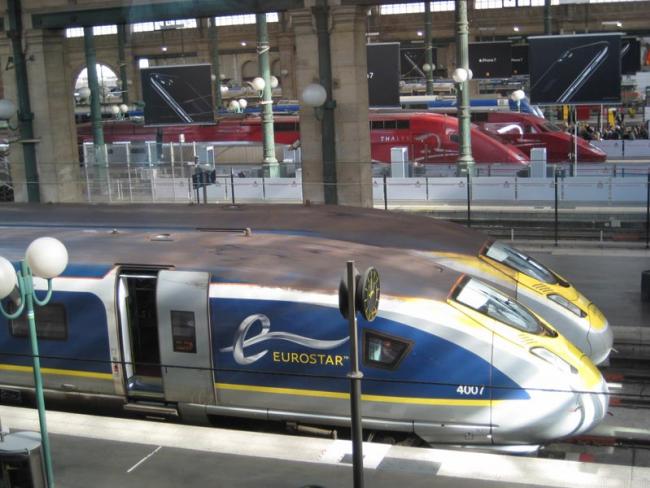 High-speed trains at the Gare du Nord in Paris. The EU wants to extend the dominance of foreign-built and owned trains – but Brexit will give us the opportunity to ensure that the trains and the track for Britain’s new high-speed developments are sourced in Britain. Photo Workers.

Building the new Britain means building new railways, making the equipment here in Britain, and running the rail network in the way we decide, for the benefit of the people.

The European Union currently stands in the way of reunifying Britain’s railways and placing them back in British public ownership.

Brexit should let us do it. It will free Britain’s railways from EU rules that underpin the requirement to separate train operations from the running of the infrastructure, and the requirement to break up and fragment rail networks as part of an agenda of “liberalisation” and privatisation.

But depending on the nature of the ultimate Brexit deal, it could also provide further and more immediate opportunities for ending the dominance in the provision of Britain’s passenger train services by foreign, largely European state-owned companies.

Brexit should also save Britain from the EU’s infamous Fourth Rail Package, approved in April 2016, which if implemented in Britain would impose even more privatisation and fragmentation on our railways. This should be the Brexit effect – but with the EU requiring the package to be implemented by 2019, whether or not it is indeed implemented in full or in part will depend on the speed of Brexit and the final agreement to leave the EU.

The Fourth Rail Package includes requirements to amend interoperability and safety directives, and a regulation expanding the role of the EU Agency for Railways so that it can take over from national safety authorities the issuing of safety certification of railway companies. It will also monitor the work of national safety authorities and supervise the application of national rules.

The EU created the “TEN-T” plans for exerting strategic control over national transport networks including rail back in 2001. Linked to that and driven by the desire for much greater privatisation and competition across Europe, the EU Agency for Railways also drafted Technical Specifications for Interoperability (TSIs).

Long before last year’s referendum vote to leave the EU, Transport for London (TfL) argued for greater localisation of standards away from major strategic routes in order to reduce the cost of compliance with regulations and standards that are inappropriate to particular routes. It commented: “Unfortunately the Fourth Rail Package appears to move in the opposite direction”.

Peter Hendy, when he was TfL Commissioner, successfully managed to resist these EU TSI rules when decisions were made about the building of the Crossrail tunnels under London. These would have otherwise required much larger tunnels and other infrastructure enhancements to allow bigger European-sized trains to be able to operate through them. He said he was “not anticipating many German freight trains through Tottenham Court Road and it would be a massive waste of money”.

‘British railways were part of the coordination of standards with European railways long before the EU.’

But Network Rail has been forced to enhance existing rail routes that Crossrail trains will use at either end of TfL’s tunnels in line with the TSIs, at huge additional cost. And this has applied to all its other enhancements. It is little wonder that the cost of electrifying the Great Western line from London to Bristol and South Wales has been so great.

Network Rail also recently built a new small platform at Doncaster station that is likely to be used by old “Pacer” and other trains for years from now, and is never going to see a train from Europe – but it was built to EU TSIs at massive additional cost.

So there are certainly huge savings to be made by ending this farcical and dogmatic application of mindless EU rules.

British railways have been part of the coordination of standards with European railways for many years, long before Britain joined the then Common Market, what is now the EU. Before the opening of the Channel Tunnel, rail vehicles were conveyed across the Channel by train ferries, and so had to be compatible with French, Belgian and other rail systems.

Britain will continue to trade with Europe and passenger and freight trains will continue to run through the Channel Tunnel, so coordination will continue. Britain’s rail industry standards body RSSB has said that Britain should not lose a significant influence with other organisations developing rail standards. RSSB’s involvement in these organisations is through the British Standards Institute, which has separate agreements with these bodies not dependent on EU membership.

Exploiting the favourable climate created by the EU, another European state-owned rail company, Italy’s FS or Trenitalia, has now taken over a British passenger rail franchise. It has bought C2C, the company that runs trains from London to Southend.

The takeover highlights once again the fact that these foreign state companies see Britain as a milch cow, allowing them to make profits that they can then invest in their home railways. So Britain’s taxpayers are now effectively subsidising rail service enhancements in Rome and Naples!

Not wishing to miss out, Spanish company RENFE has joined Virgin and Stagecoach to bid for the new West Coast main line franchise which will be initial operator of passenger trains on HS2.

Chinese company MTR, having already bagged the Crossrail franchise, has now joined with First Group to prise South West Trains from Stagecoach, and will take over in August. This winning bid has raised eyebrows as it commits the company to withdrawing from service 150 new train carriages after just two years, when  some of those carriages are still being built!

It is apparently cheaper for the new franchise holder to order new trains than operate the ones that have been ordered by the current operator. The discarded trains are unlikely to find use elsewhere – passengers in other parts of the country that travel on old trains that are not planned to be replaced anytime soon will rightly see this as a scandalous waste of public money.

Britain voted to leave the EU in order to take control of our own affairs, including our railways. The ending of EU rules will save taxpayers money, and it will remove the barriers to reuniting train operations with rail infrastructure management under public ownership.

But we need to go way beyond that! Brexit must mean the immediate expulsion of mainly European state-owned operators that are nothing but parasites, sucking taxpayers’ money away from Britain.

With the recent passing of the Act of Parliament authorising construction of HS2, we need to ensure that the huge amounts of steel that will be needed in the building of the new railway are made here in Britain.  That must also apply to Crossrail 2, a new railway under London that must be authorised because it is desperately needed to keep the capital moving. And we must insist that the new HS2 trains, and the new trains for the existing network, are manufactured here in Britain.