Skip to main content
Home » News/Views » Refugees: how to create a crisis

Refugees: how to create a crisis 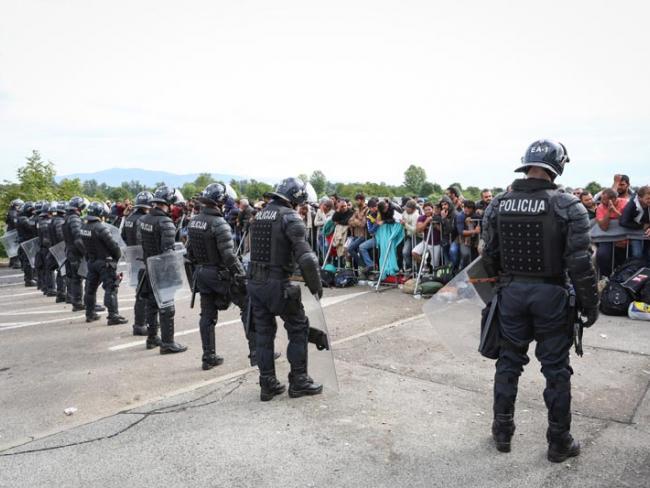 NATO governments, led by the Obama and Cameron administrations, are scheming to win the support of the peoples of Europe for intervening in Syria, an illegal war of aggression. They are using the refugees to create social and political chaos in Europe in an effort to whip up popular pressure for NATO to deal with the “source” of the problem.

Early in the war, NATO member Turkey set up huge refugee camps which at one point housed two million refugees from Syria, with $6 billion of US aid. The Turkish government was not holding the refugees out of altruism, but to use them for various purposes.

The refugees could be sent into Syria as human shields for NATO-enforced “safe zones” there, which would be bases for attacking Syrian forces. Or they could be sent into Europe to put pressure on Europe’s peoples, causing a “refugee crisis”, which could then be blamed on President Assad, in order to create a pretext for NATO intervention in Syria.

The Turkish government forcibly kept the refugees in these camps until suddenly this April it not only allowed but encouraged them to leave. It has assisted the huge people-smuggling operation being run from several coastal Turkish cities. Also, the Turkish government allowed ISIS terrorists to recruit in the camps and it allowed them free movement across the border from Turkey into Syria.

‘Between January and June, Syrians only accounted for 18.4 per cent of asylum claims in the EU.’

Between January and June, according to European Commission figures, Syrians only accounted for 18.4 per cent of asylum claims in the EU. Other nationalities were Afghans, Iraqis, Pakistanis, Eritreans, Ukrainians and Somalis. The six countries of the Western Balkans accounted for 26.6 per cent of the total asylum claimants. Those seeking asylum in the EU are largely young and male. 55.8 per cent are aged between 18 and 34; 72.4 per cent are male and 27.6 per cent are female.

It’s no accident that destabilising flows of refugees are being channelled through the Russia-friendly countries of Greece, Macedonia and Serbia rather than through US allies Albania and Bulgaria. This shift to the Eastern Mediterranean and West Balkan route has been triggered mainly by refugees leaving their temporary accommodation in neighbouring countries to try to get into Europe. The UN High Commissioner for Refugees found that 60 per cent of the refugees arriving in Greece had previously been in Turkey, so their lives were not in danger.

Merkel has opened the gates for mass migration into the Schengen area. She says she needs a million new migrants, but Germany has 1.97 million unemployed already. Clearly, she wants to use mass immigration to maintain downward pressure on German workers’ wages (stagnant since 1995).

The OECD forecasts that more than a million people will arrive this year. Germany will be accepting one million, or so it says. The German government says it will spend an extra £4.4 billion to cope with this year’s record influx of refugees. But under the Schengen rules, it is impossible for a country to keep people in the country to which they have been assigned.