Skip to main content
Home » News/Views » Revolution: which side are you on?

Revolution: which side are you on? 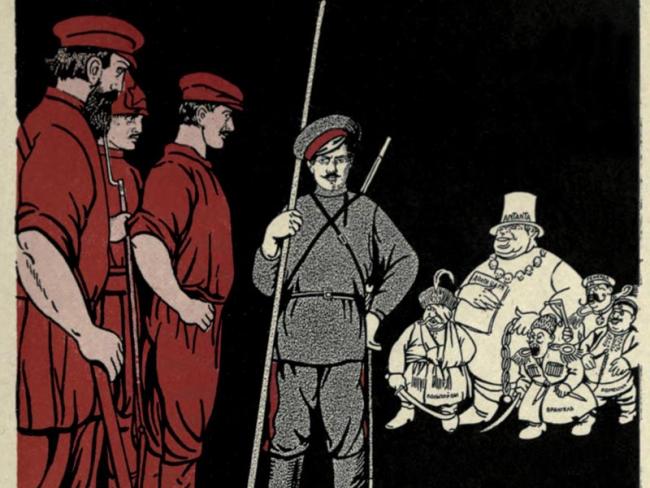 Poster from around 1919 calling on people to take sides. Underneath it read, “Cossack, who are you with? With us or with them?” – the question is asked by the Bolshevik peasant, soldier and worker. Photo Everrett Historical/shutterstock.com

A century after the Bolshevik Revolution ushered in workers’ power, the lessons continue to reverberate around the world…

When Frederick Engels was asked in 1889, on the 100th anniversary of the French Revolution, to explain its significance, he declined on the basis that it was too early to say.

The 100th anniversary of the Bolshevik Revolution has been commemorated in every country in the world, with comment by political parties of every description, with praise, with support, with confusion – and every counter-revolutionary lie ever invented.

Any appraisal of the century since the Bolshevik Revolution must also consider its mirror image: a century of counter-revolution, still ongoing.

Here in Britain the Trades Union Congress has commemorated the Russian Revolution. This is fine. But we commemorate the Bolshevik Revolution, and there is a fundamental difference.

The Russian Revolution was the coming together in February 1917 of myriad forces for change to sweep away Tsarism. The Bolshevik Revolution In October that year was the sweeping away of capitalism and of the bourgeoisie, creating the first dictatorship of the working class and peasantry in history. The world was stood on its head.

What was Tsarism? In short, the most reactionary, bloody, oppressive, anti-worker, anti-peasant, anti-people, anti-progress regime to have blighted the history of the world.

Everything belongs in a historical context. In Britain we finally destroyed feudalism, along with Charles I, in 1649. France had its great revolution in 1789. Russia lagged years behind.

In applying Marxism to Russian conditions the Bolsheviks were able to understand the unevenness and the contradictions inherent in development, and lead a great revolution.

Russia was a combination of reactionary forces: feudal landowners who retained serfdom until the 1860s; religious bigotry and backwardness truly worthy of the Dark Ages; and capitalism in its infancy but fuelled by French and German finance. Dissent was brutally suppressed, along with workers, peasants, women and the national minorities, who numbered over half the population.

What was to be done?

In the face of this oppression and ignorance, the task was straightforward: build a revolutionary organisation based upon Marxist principles and analysis. It had to be capable of uniting the workers’ and peasants’ movement under working class leadership to smash the system to pieces.

That is what the Bolshevik Party under Lenin’s leadership did, never deviating from focusing on Russia and building the Party.

The workers and peasants of what became the Union of Soviet Socialist Republics inherited the revolutionary destruction of Tsarism, the civil war that followed, the defeat of the Allied intervention, and the devastation of industry, transport, health, education and civil society. They started with nothing. But in destroying the old system, the Bolshevik Revolution produced a reaction: the counter-revolutionary scum which still feeds the blackest forces of reaction across the world.

‘The world was stood on its head.’

From day one of victory, the enemies of socialism strained to throttle this new, unique workers’ and peasants’ state at birth. It has been estimated that in the lead-up to the Nazi invasion of the USSR, over 200 fascist counter-revolutionary organisations festered in the nations bordering the Soviet Union.

The ceaseless attacks by the world’s bourgeoisie against what was the first workers’ and peasants’ state, its ideas and its practice, continue to this day.

It has been the same wherever people have stood up for independence, sovereignty and self-determination – China, all the Peoples Democracies in Eastern Europe, and even those which tried a parliamentary road, such as Chile. All have been attacked.

There is still undying hatred of Lenin, dead 93 years, and even more of Stalin, dead 64 years and the architect of the USSR. He promoted the building of socialism and ruthlessly defended the Soviet state against all-comers – left or right, internal or external.

Driven by their racist ideology Nazis and fascists massacred peoples of the world. The Soviet Union united and developed its peoples to protect themselves, peace and socialism. You may have been part of a specific republic nationality but you were united as Soviet citizens.

The Soviet working class and peasantry crossed from the capitalist world into the uncharted lands of building socialism. They saw off the doubters, the armchair theoreticians, “the Old Imbeciles” as Lenin described the Old Bolsheviks. Asserting the new industrial Soviet working class was vital.

There could be no ready-made solutions for the Soviet working class. Nor are there for us in Britain, though the principles that guided them point the way (see Box, left).

They had to socialise and collectivise agriculture to take the USSR from the 16th century into the 20th. This resulted in a brutal civil war in the countryside as rich peasants fought against the socialist revolution.

Of course, tactical mistakes were made but the strategic success of the policy was vindicated. The USSR was fed and capital was raised to assist industrialisation. The peasant of the 16th century became the Soviet citizen and worker of the 20th century, and the Soviet peoples defeated Nazism in the Second World War.

Under the Soviet constitution of 1936 (often called the Stalin Constitution, though never by Stalin), citizens had the right to work, to leisure, to material maintenance in their old age, in illness and incapacitation, and to education. Compare that with Britain in the 1930s – and today.

Every revolution since 1917 – China, Albania, Cuba, Vietnam and others – has been based on the principles and practice hammered out by the Bolshevik Revolution.
And every revolution lost must return to the issue of rootedness, of dealing with the analysis of real events, with the Party not becoming divorced from the class. Along with this, workers need to comprehend the sheer scale of orchestrated worldwide counter-revolution grounded in the heartlands of capitalism – London, Washington, Berlin, Paris.

Lenin described the dictatorship of the proletariat as “a most determined and most ruthless war waged by the new class against a more powerful enemy, the bourgeoisie, whose resistance is increased tenfold by its overthrow…a stubborn struggle – bloody and bloodless, violent and peaceful, military and economic, educational and administrative – against the forces and traditions of the old society”.

What lessons do we see for Britain today? First, we need clarity about class: there are only two in Britain – those who labour and those who exploit irrespective of how the world of work is cosmetically redefined. Exploitation is exploitation. Anything which divides us is the enemy.

We also need clarity about nation – we need to take the boot of the EU off our necks as a class to be able to deal with our own bourgeoisie.

We need clarity about industry and our ability as a nation of workers to produce, and clarity that struggle through Parliament will never bring success.
We must prevent war. Never mind Trump – the EU also beats the drums of war daily. Who is their enemy? Why, us of course.

We need to build the Communist Party. Our working class has been around a long time: we are not a Party looking at a blank sheet of paper. But we need organisation and it must permeate every aspect of our thinking and our working class. It is our life blood for growth and renewal.

The challenge is to change the world and we start by defeating our own ruling class and their allies in the EU.

Diary of a nobody
The aims of Soviet socialism
A long way from a believable future for rail
No pay, no productivity
Guards battle still raging [shorter]