The rise of nuclear power 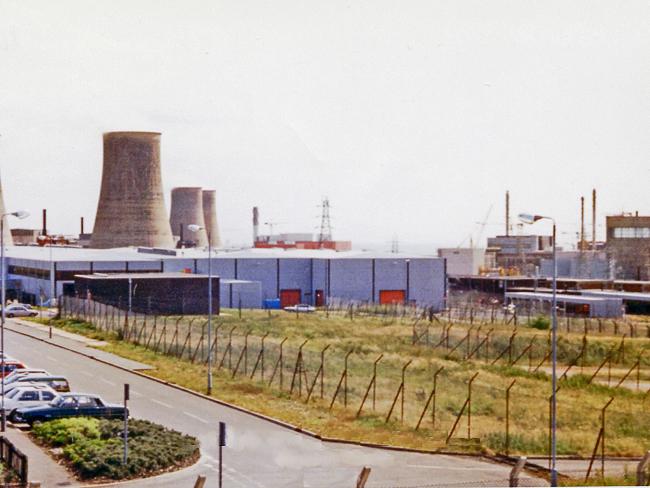 Long before the development of the atomic bomb, research in Britain – especially at the Cavendish Laboratory in Cambridge – had established a formidable base of knowledge about the atom. It was there that J. J. Thomson discovered the electron in 1897, and James Chadwick discovered the neutron in 1932.

It was also at the Cavendish that Ernest Rutherford led the first experimental splitting of an atomic nucleus. A New Zealander, he had identified alpha and beta radiation while in Canada, and discovered the proton in Manchester.

Nuclear research was spurred on during World War 2. British and Canadian scientists worked together in a project known as “Tube Alloys” to produce a nuclear weapon. They joined the Manhattan Project, when America decided to develop its nuclear weapon.

In 1946 the USA stopped sharing nuclear secrets with its wartime allies, despite their open cooperation. The British government was forced to find its own way to build a nuclear bomb. Two air-cooled reactors, called “piles”, were built at a wartime munitions site at Sellafield on the Cumbrian coast, later known as Windscale.

By 1950, the two large nuclear piles achieved fission, creating new elements including plutonium. By 1952 Britain successfully tested its first nuclear bomb. Christopher Hinton, in charge of the construction of Windscale and other key parts of the Britain’s nuclear infrastructure, recommended building a new, larger fission reactor that would both manufacture plutonium for the military and provide heat to create steam for power generation.

The project was given the go-ahead in 1953 with the building of Calder Hall on the Windscale site, the capitalist world’s first nuclear power station. It was opened in 1956, two years after the Soviet Union’s Obninsk power station. Despite a planned lifetime of 20 years it generated electricity until it was closed in 2003.

USA’s non-cooperation meant Britain had to develop its own nuclear technology. Nuclear reactors all require a way of controlling the fission (the “moderator”) and a mechanism for transferring the heat from the fission to a boiler to create steam (a coolant). As in a conventional power station the steam drives a turbine which turns an alternator to generate electricity.

Without access to enriched uranium and heavy water, controlled by the USA, Britain had to choose the combination of a graphite moderator and a gas-cooled reactor, a design known as Magnox. At the time there seemed no disadvantage in this design compared with the water-cooled reactors used in the USA, but it became a dead-end later on.

In the early stages, the British electricity industry didn’t contribute to the project (indeed, initially all of Calder Hall’s electrical output was used to make plutonium). The UK Atomic Energy Authority (UKAEA) controlled military and civil nuclear matters. It was independent, received government funds through a separate “vote” and could take rapid decisions.

By the middle to late 1950s, nuclear energy looked more appealing. Coal then couldn’t meet power needs and imported oil was expensive. The Suez crisis of 1956 exposed the dangers of reliance on external oil supplies. A government working party backed nuclear power for the future. That declaration was often repeated subsequently but in reality it was never effectively pursued.

Hurrying into plutonium production while in possession of incomplete knowledge was potentially dangerous. That became clear in October 1957 when one of the Windscale air-cooled uranium piles caught fire. That led to a serious leak of radiation over the Lake District and a radioactive plume that spread across Europe.

Fortunately air filters were installed on the chimneys, which greatly reduced the impact of the accident. They were added only late in construction and at considerable cost, on the insistence of nuclear scientist John Cockroft. Without the filters large parts of the north-west of England may have become uninhabitable. The full official report was kept secret and only released in 1992, but the fire did lead to safety improvements at the Magnox power stations.

The Central Electricity Generating Board was created in 1957 to run the nationalised electricity industry. Six nuclear Magnox power stations were constructed in the mid-sixties, then the largest programme in the world. Later the number of nuclear power stations increased to ten.

The Magnox programme was justified mainly on energy security grounds, though by the early 1960s both coal and oil were relatively abundant. The CEGB ran the Magnoxes which performed reliably and safely over the next four decades. Today they are now silent architectural reminders of a more optimistic past.

By the mid-1960s the British government decided on a second nuclear programme based on advanced gas-cooled reactors (AGRs). That was ultimately a disastrous decision. The AGRs were built late, hugely over budget and never performed at the level they were designed for. By now the USA was marketing water-cooled reactors, which were technologically in the lead and cheaper to build.

Criticisms of the AGRs grew in the 1970s. The Conservative government of 1979 decided all nuclear stations would have pressurised-water reactors (PWRs). Publicly, government declarations were pro-nuclear and anti-coal (mainly because of their hatred of the miners’ union). But there was little new nuclear power construction for two decades under either Conservative or Labour governments.

The Sizewell B nuclear power plant from the PWR programme, built between 1987 and 1995, is in fact the most recent nuclear plant to be constructed in Britain. Significantly in 1989 the energy industry was privatised. Strategic national consideration of the need for nuclear power lessened under the pressure of commercial interests.

In the past forty years there has been little progress in developing a revitalised nuclear power industry based on British know-how and technological expertise. During that period there has been no real forward planning in Britain for nuclear power generation. Endless White Papers, government announcements and declarations of slight intent have not produced an effective strategy and no working stations since Sizewell B.

By the mid-2000s the prospect of new nuclear facilities as a source of low-carbon power became more acceptable again as worries about climate change grew. North Sea gas began to run out quickly, coal stations were closed down and most of the first-generation Magnox stations were decommissioned. And although their life was extended, it was only going to be a matter of time before the AGRs were put out of use too.

Successive British governments have baulked at driving a self-reliant approach and limited their role to empty rhetoric. At the same time they have made our country attractive and subservient to foreign companies through the offer of extravagant subsidies and ridiculously generous pricing policies.

There have been missed opportunities too. In 1999 state owned British Nuclear Fuels Limited, formerly a division of UKAEA, bought Westinghouse Electric, one of the leading producers of nuclear reactors. But despite adding ABB Group’s nuclear division the following year, BNFL sold the whole of Westinghouse to Toshiba in 2006. This led to a loss of expertise and capacity at a time when demand for nuclear generation was growing. BNFL was itself broken up over the following three years.

In January 2008, the Labour government gave the go-ahead for a new generation of nuclear power stations to be built. It wanted the private sector to build new nuclear stations and be responsible for the waste and liability costs. By and large that didn’t happen, not least because the projected costs of decommissioning nuclear plants and dealing with waste were huge.

In November 2009, the Labour Government identified nuclear sites which could accommodate future reactors. None were in Scotland as the Scottish government opposed new nuclear power stations being built.

In 2013 the Coalition government published a so-called nuclear industrial strategy. It also named sites and that building new nuclear power plants was a matter of urgency. But still little has come to fruition.

‘Britain still has no energy strategy.’

As Brexit and independence approaches, Britain has still not established a strategic energy policy including a commitment to a greater role for new nuclear power. A House of Commons research paper published this August describes the recent history of energy policy. A White Paper on Energy was announced in 2018. It was due for publication last summer but it is continually delayed.

Government indifference and hiding behind EU rules on state support are no longer options; an energy deficit and subsequent power blackouts are likely. We need to rediscover a belief in our own capabilities.

On behalf of the people the government should establish a national programme of development using our in-house expertise with contracts going to British companies. We should also harness the talent and knowledge of nuclear power engineering departments in our British universities.

Already Rolls-Royce is developing the technology to produce small modular nuclear reactors. If that is proven to be reliable and safe, then why not go with it and any other credible domestic arrangements. That would end the debacle of undignified and ultimately ineffective reliance on others.

We ought by now to have learned the lessons from foreign control of the nuclear power programme. The French company EDF and Chinese CGN are milking Britain dry over the building of Hinkley Point C nuclear power station in Somerset. They have procrastinated with endless delays and ever rising costs, now reaching over £23 billion. And completion is still not expected before 2027.

This scandal has entailed a massive government subsidy to foreign companies, compensating these “investors” for bearing the construction risk, which is temporary, through a very long-term favourable price agreement.

And this September Hitachi officially withdrew from construction of Wylfa Newyyd on Anglesey. Work had been suspended since January 2019 due to rising costs.

This ruinous approach can’t continue and the failures of the past must not be endlessly repeated. We can do far better ourselves. Our energy policy needs a radical overhaul, quickly, and nuclear power – a reliable source of non-carbon power –should definitely be part of our country’s mix of energy provision.