Rolls-Royce workers take up the fight for engineering 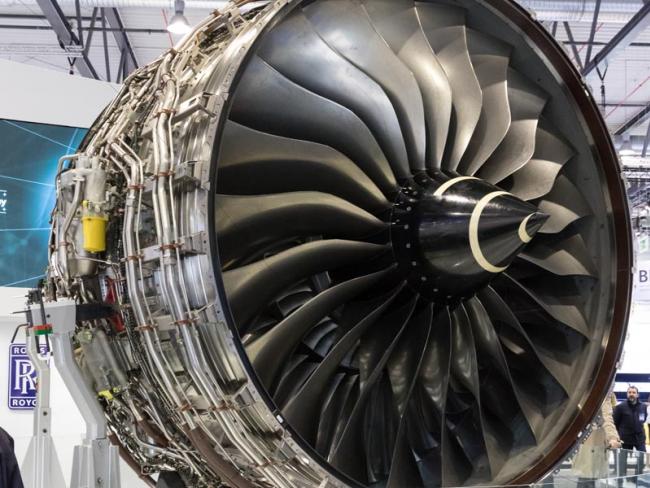 Rolls-Royce Trent XWB engine, which powers the Airbus A350, at the ILA Berlin show in 2018. The fan blades are made at Barnoldswick. Photo Matti Blume (CC BY-SA 4.0).

Rolls-Royce workers at Barnoldswick in Lancashire are fighting to keep their jobs in Britain. Three weeks of targeted strike action begin on 6 November against the company’s plan to move production offshore.

The factory makes blades for the Trent series of jet engines. Blades are one of the most technologically advanced aviation products and an essential engine component. Rolls-Royce is a world leader in developing this technology, and the Barnoldswick site has played a key part.

Rolls-Royce revealed in August that it intended to move fan blade production to Singapore. One of the two sites in the town – Ghyll Brow – would close, leaving the long term existence of the other – Bankfield – in jeopardy.

In 2009 Rolls-Royce assured the Labour government and the workforce that setting up a fan blade site in Singapore would not lead to the closure of Barnoldswick or job losses. The company was then seeking government support during a crisis, as it is now.

Faced with the loss of 350 highly skilled jobs on top of 230 losses announced in June, Barnoldswick workers in Unite voted 94 per cent in favour of action. The company has not begun consultation, although it has done so for other closures, such as Annesley in Nottinghamshire.

The company’s announcement on 26 August came as it reported over £5 billion losses for the first half of the year. Like the rest of the aerospace industry, Rolls-Royce has been hit by the coronavirus pandemic. But the workers believe that the move to Singapore is a strategic choice and not a short-term reaction to the economic crisis.

Barnoldswick has been at the heart of jet engine development since the 1940s. The government set up facilities there during the Second World War for Frank Whittle to complete his pioneering work. Barnoldswick built the engines for the Gloster Meteor, the first British jet fighter and the second in the world. These early engines established Rolls-Royce at the front of jet technology.

Later the factory helped develop the RB211 engine (RB standing for “Rolls Barnoldswick”). Although development caused severe financial problems for Rolls-Royce, the RB211 was a leap forward in engine design and power, paving the way for the efficient engines in use today including the Trent series. Rolls-Royce was nationalised in 1971 to save it from going bust (and sold to Vickers in 1980) – and with the RB211 became the world leader in aero engines

But the Rolls-Royce workers, former workers and the town as a whole are not backward-looking. They recognise there will always be change in engineering, especially with advanced technology. They point to their record of innovation and quality stretching over more than 70 years. Barnoldswick has unrivalled expertise and the ability to meet new challenges.

Rolls-Royce workers have made a 24-minute video about the importance of Rolls-Royce to Barnoldswick and the fight to save it. Rolls-Royce not only supports local companies in the supply chain, but the area’s skill base is the foundation of many local manufacturing firms like Hope Technology (see Made in Barlik). Once those skills have gone, they may never return.

‘Why would the government permit Rolls-Royce to inflict such damage.’

Workers, their unions and the town are asking why the government would permit Rolls-Royce to inflict such damage. An exchange in the House of Lords on 14 October reveals all. Lord Greaves, formerly a local LibDem politician, quite reasonably asked what the government was doing to ensure that the company keeps advanced manufacturing jobs in Britain.

The junior government minister and former MEP Lord Callanan said that the government was in “dialogue” with Rolls and “…will continue to engage to understand what can be done to save jobs and capabilities…”. He hoped that £9.5 billion over the next three years to the aerospace and aviation industries would help to create new, well paid jobs in the future.

When pressed for firmer commitments to retain jobs and skills in return for our money, Callanan’s reply was that “…Rolls-Royce is a global company and it is having to make some very difficult decisions about its footprint everywhere…”. He pointed to the large amounts that Rolls-Royce has received under various Covid schemes.

In other words, as well the cost of immediate crisis support, British workers will have to pay for our jobs and skills being moved elsewhere. That did not go down well in Barnoldswick, where people are well aware that their skills set up the Singapore plant in the first place.

On 19 October the RR National Trade Union Group, Unite and GMB, wrote an open letter to company CEO Warren East. They want Rolls-Royce to withdraw the plan to move blade production offshore, or else for the plant to retain the same number of workers, with absolute guarantees on long-term commitment to the site.

The unions say that they cannot stand by waiting for death by a thousand cuts undermining the viability of the site and point to the disproportionate loss of jobs in Britain in the present plan. They have stated a wish to consult and negotiate, as they have done from the outset of the crisis and earlier.

Barnoldswick workers have accepted changes to terms and conditions as well as voluntary redundancies in earlier years. They also agreed to a 10 per cent cut in pay at the start of the pandemic and were discussing short-time working to save jobs and the site.

Instead of building on the workers’ commitment, the company chose to eliminate any possibility of the workers’ proposals happening. The announced job losses mean that 150 workers would be left at Barnoldswick, raising questions about its viability. Two years ago Rolls-Royce employed over 1,150 at Barnoldswick. Against that background, the strength of the vote to strike is not surprising.

The Rolls-Royce workers and local people are building the campaign, tagged #battleforbarnoldswick. As Ross Quinn, Unite regional officer, said, “Barnoldswick was the birthplace of the jet engine, Rolls-Royce has been the principal employer for nearly 70 years and they are not prepared to let that disappear without a fight.”

• Related article: Made in Barlick