Russia’s not our enemy 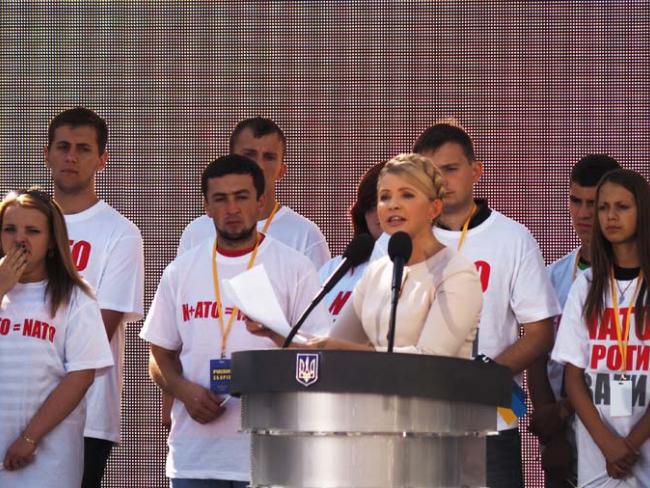 The EU Council recently chose its new President – Polish Prime Minister Donald Tusk. Tusk doesn’t speak a word of either English or French, the lingua franca of the EU, and comes from a country not in the Eurozone. He will chair summits. He was the US candidate for the EU job because he is a hawk on Russia. He’s had more bad and ugly things to say about Putin and Russia than just about anybody recently and that’s saying something.

The US and EU have worked for years to see their desire to take over Ukraine come to fruition. They wanted Crimea, because of the naval base facilities in Sevastopol, and the Donbas Region most of all, because it’s the richest part of Ukraine thanks to its industrial base.

They have shown that they are prepared to sacrifice the lives of thousands of Ukrainians to achieve this objective. But they haven’t yet won their goal because of the resistance of the Ukrainian workers in Eastern Ukraine and the chess-playing skills of Russian president Vladimir Putin.

The EU’s military wing, NATO, is now stepping up the battle. It desperately wants the naval base at Sevastopol, and it needs Ukraine in NATO. US neoconservatives had long seen control of the Black Sea as vital to US energy security, because whoever controls it controls access to the Middle East and Central Asian oil and gas supplies.

But NATO’s charter is clear that a country cannot be a member if it hosts a foreign military base on its soil. Ukraine had agreed a lease with Russia to man the Sevastopol base until 2017. So Ukraine could not join NATO without renouncing the lease.

The US and the EU thought they had secured Ukraine when they funded, through their NGOs, the “Orange Revolution” in Ukraine in 2004/5. But their puppets running the country pillaged the place and left it bankrupt without renouncing the lease. In February 2010, Yanukovych was elected President and immediately negotiated an extension of the lease by 25 years to 2042 in exchange for massive Russian subsidies and a 30 per cent reduction in gas prices.

While this deal cost Russia dearly, some $4 billion a year, it promoted the integration of certain Russian and Ukrainian industries and it guaranteed that Ukraine wouldn’t join NATO until 2042 unless the Ukraine government renounced the new deal. Keeping a Russian presence in Crimea was also seen as a way of reassuring the Russian population of Crimea and the Donbas against the constant threat from extreme Ukrainian nationalists.

The US was furious about the deal and began a campaign of destabilisation in Russia through the NGOs funded by USAID and EU institutions. When it pressed the EU to do something to split Ukraine away from Russia and into the US/EU/NATO camp, the EU complied in 2012 by offering Ukraine, Georgia, Moldova and Armenia EU Associate Agreements, which it promised would lead to full EU membership.

But apart from having to agree to Eurozone austerity measures and being banned from having trade agreements with other countries, they would have to join NATO. For Ukraine this meant renouncing the deal with Russia, including the Sevastopol lease. In response to these US pressures Russia declared all those NGOs “Agents of Foreign Powers”, Armenia rejected the offer and chose to work with Russia, Georgia and Moldova accepted the proposal and Ukraine hovered.

The US and the EU knew the Russian deal was not sufficient to bale out Ukraine and hinted at a $17 billion IMF loan and more austerity. By 2013, Ukraine couldn’t pay Russia for its gas even with a 30 per cent discount. In late 2013, Yanukovych rejected the EU/NATO deal and said he would seek to strengthen his agreement with Russia. He knew that without the Russian presence in Crimea, ethnic tensions would seriously escalate.

‘Media hysteria whipped up by the US and EU now identified Putin as Hitler and Satan rolled into one.’

The US and EU now went for the jugular. They launched a campaign demonising Putin and Russia. Through their NGOs inside Ukraine they encouraged and armed the fascist Svoboda Party and the Right Sector Party, calling them “pro democracy activists”. And they fomented another “colour revolution”, as they had in 2004/5.

It was going swimmingly for them. Their diplomats handed out EU flags to wave in Maidan Square, and they mixed and plotted with the opposition. The US and the EU each had their favourite candidates to take over, as became apparent when a taped phone conversation from Victoria Nulan, US Deputy Secretary of State, was leaked saying, “Yats is the guy and fuck the EU.”

It was indeed Yatsenyuk, the US’s “guy”, who went on to become prime Minister after the coup which saw a compromise brokered by Putin torn up and death threats made against Yanukovych by the now out-of-control fascists. The previous deal with Russia was torn up and Russia withdrew the 30 per cent discount on gas. It was only a matter of days before the Sevastopol lease would be renounced.

Reports came from Ukrainian miners’ and steelworkers’ unions in the Donbas that their members were arming themselves to protect their communities from the new Junta and the fascists, who were well known to all in the East.

Crimea went one step further. The naval base at Sevastopol had been home to the Russian and Soviet Black Sea Fleet since the 18th century. The population was mainly Russian and Crimea had always been Russian until Krushchev “gave” it to Ukraine in 1954. Their Autonomous Parliament voted to rejoin Russia, and a referendum delivered a 97 per cent Yes vote on an 83 per cent turnout.

Coordinated with Russian legal changes, Crimea, including the naval base, returned to Russia. The western media hysteria whipped up by the US and EU now identified Putin as Hitler and Satan rolled into one. NATO began to make war threats. The US sent two warships into the Black Sea.

In a speech to EU leaders behind closed doors in Brussels David Cameron compared Putin directly to Hitler, saying that Putin must not be appeased. Meanwhile Ed Miliband said, “Prince Charles ‘had a point’ when he compared Vladimir Putin with Adolf Hitler.”

Putin went on Russian TV and made it crystal clear that Russia did not seek any territory from Ukraine other than accepting the wish of the Crimean people to return to Russia. The Ukraine fascists responded by burning to death 41 anti-junta protesters in a trade union building in Odessa.

It was to get worse for the US and EU when the Donetsk and Luhansk local parliaments decided to go for a referendum on either independence or more autonomy. Joining Russia was not on the ballot. Similar results were declared.

Obama introduced a national emergency executive order to punish, not the illegal junta, but those who “undermined democratic processes and institutions” by opposing the junta. A presidential election in the parts of Ukraine still controlled by the junta resulted in a win for chocolate billionaire Poroschenko. His first act was to use artillery and aircraft against separatists in Donetsk and Luhansk, killing many civilians.

Mass defections by his troops not willing to kill their own people followed. Next he imposed EU “austerity” measures and then established close relations with the US and EU. But his army was poorly trained and low in morale. They lost many troops and hundreds fled across the border with Russia, where they were joined by some 200,000 refugees.

The Donbas rebels made huge advances after taking some hits. The mysterious, still unexplained shooting down of flight MH17 was blamed by the US and EU on Russia without the slightest evidence and the venom was ratcheted up against Putin again. Accusations of “1,000 Russian troops in Eastern Ukraine” were made by NATO, again without a shred of evidence.

Meanwhile, Obama’s and Cameron’s nemesis in Belarus, Alexander Lukashenko, hosted talks in Minsk between Poroschenko, Putin, the rebel leaders, the EU and Kazakhstan. The EU had become aware that there was a real possibility of it being forced into a war against Russia while Obama had insisted that there would be no US boots on the ground.

Eventually, as winter drew near, with the gas turned off because of failure to pay for it, with the coalmines in eastern Ukraine bombed by his own air force and artillery, and because of the dire military situation, Poroschenko agreed a ceasefire and road map with the rebels, proposed by Putin.

This humiliation led to stronger US sanctions on Russia – which had called for and brokered a ceasefire and negotiations – and on its oil, gas and finance industries. NATO followed with exercises in Ukraine, including British troops.

The EU meekly agreed to follow suit on the sanctions, and the US then pushed successfully for its candidate for the EU Presidency, just as it had in Ukraine. The EU and the Ukraine government then ratified the EU/Ukraine Association, along with a Ukrainian undertaking of more autonomy for the Donbas Region.

The US and the EU did not get what they wanted – Sevastopol and the Donbas. But after spending billions on regime change to secure the Donbas and Crimea, and having demonised Putin and Russia, are they really going to give up now?